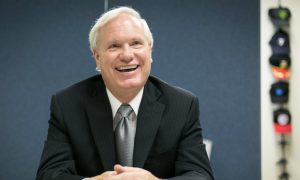 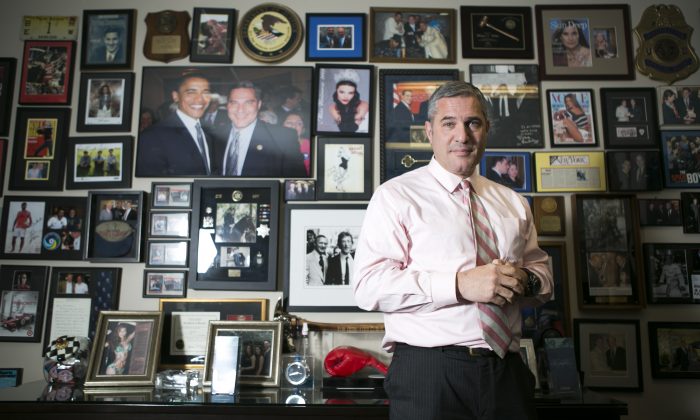 This Is New York: Michael Wildes, on Continuing a Legacy

NEW YORK—Michael Wildes is an immigration lawyer who, at times, has needed a bodyguard and a bullet proof vest.

“I refuse to stand down from cases because of my personal safety,” he said.

He represents a wide range of immigrants—from ordinary people to Miss Universe. He also defends defectors, often defectors with terrorist knowledge. He represents them pro bono even though such cases can present a risk to his life. It helps that he is licensed to carry a firearm.

He has worked on immigration cases of former intelligence operatives, cases that the CIA does not allow him to keep paper documents on.

Wildes has represented figures such as the Saudi Arabian diplomat Mohammed Al-Khilewi, who defected with evidence of international terrorism and espionage.

Wildes, 49, is a thickset, nattily-dressed man. His features—soft eyes, strong nose, silver hair—reminds one of a kind and wise guardian.

His office is next to the office of his lifelong idol, his father, at the Wildes & Weinberg P.C law firm.

As a child, when Wildes listened to his father talk on the phone, it was hard to tell if he was speaking to John Lennon or the housekeeper.

“He’s very respectful like that,” Wildes said. His father, Leon Wildes, is the immigration attorney who won John Lennon’s deportation case, a milestone in immigration law that set the foundations for President Obama’s Deferred Action Plan.

His father won the case through four separate lawsuits amid the Nixon administration’s efforts to deport Lennon, which shed light on the government’s covert practices and how it influenced immigration.

The case resulted in more transparency in the U.S. immigration system, and paved the way for the Deferred Action for Childhood Arrivals (DACA), which allows people who had entered the U.S illegally as children to remain in the U.S.

Immigration lawyer Leon Wildes (L) with John Lennon (C) and Yoko Ono (R). Lennon holds up his green card in circa summer of 1976, despite the Nixon administration’s efforts to deport him. (Courtesy of Wildes & Weinberg P.C)

He is also the former Mayor of Englewood, New Jersey, a member of the Committee on Present Danger (where he serves with former CIA Director James Woolsey and Senator Joseph Lieberman), and a potential congressional candidate, albeit not for this election. Wildes is waiting for a time when his children can take over the firm.

Autographs and photos of figures such as Uma Thurman, Bon Jovi, and himself with President Obama fill the walls in his office.

In the meantime, he is taking on cases that address major issues in the immigration system. Wildes is currently representing actress Kelly Rutherford, whose children cannot live with her in the U.S. due to her ex-husband’s deportation.

“A lot of couples are in cross-cultural relationships,” Wildes said. “International child abduction cases are important issues for immigration.”

“Michael has been incredible. He has helped so much with my case,” Rutherford said.

Running on Three Hours of Sleep

Wildes makes Skype calls late at night to clients who live in places such as Singapore, on a side of the world where people are just waking up.

And he makes a habit of responding to all his emails before going to bed. If he receives an email while he’s asleep, he wakes up to respond to it.

There’s an orange bag in Wildes’s office for his emergency equipment, in case he is called to go on a run. His father takes his place if he does.

He became an EMT 22 years ago, when he and his wife had their first child. “I was very nervous about not understanding what to do if a medical emergency were to happen,” he said. He recertifies every three years.

Once or twice a month, Wildes volunteers with Hatzalah, a volunteer a Emergency Medical Service organization.

In 2013, he used his skills to assist an 80-year-old woman who had a minor stroke during an American Airlines flight. The airline added bonus miles to his frequent flier account.

His father, who is 81 now, can be seen from time to time cleaning the Wildes & Weinberg sign in the office space that he has rented for 48 years.

“He used to clean windows for his father’s dry goods store,” Wildes said. “You start a business and run a business all on a clean name.”

“Truth is, I just always wanted to be with my dad,” he said. “If he had a store I’d be sweeping it right now.”

Wildes’s father has been practicing law for 58 years. In high school, Wildes used to hold his father’s brief case and come to work with him on Sunday’s.

In college, he attended his father’s law class at the Benjamin N. Cardozo School of Law —the class where he met his wife—and helped prep his father the evening before. Now Wildes is teaching that same class.

Wildes and his father are getting ready to publish an extensive book about the John Lennon case and how immigration laws have evolved.

“I just finished the book,” the senior Wildes said. “Yoko was kind enough to give me full permission to publish it.”

What is Wildes’s next ambition? Congress.

He started a campaign account for Wildes for Congress in 2004.

“My dream is to serve in Washington,” he said. But I’m going to wait until my kids can get in here first. They need to keep the legacy going.”