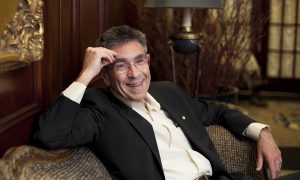 This Is New York: Robert Lefkowitz, on Winning a Nobel Prize
0 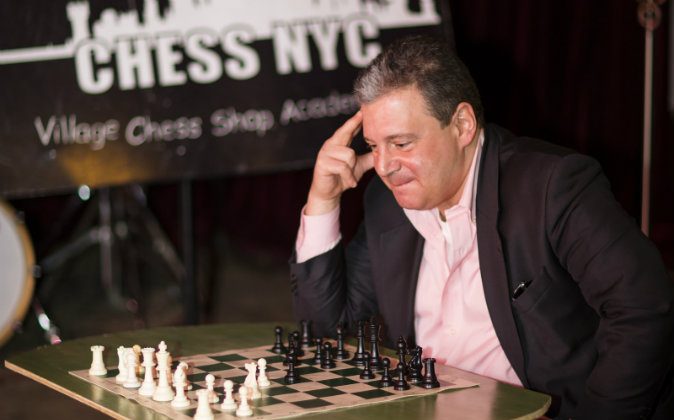 Looking for the next Bobby Fischer
By Amelia Pang
Print

Propper, 52, was once an Amateur Athletic Union basketball coach, the owner of a phone company, and the president of the New York City school board, but never much of a chess player.

Wearing jeans, a pink dress shirt, and once-white Nikes, Propper explained that he did try to play chess as a child. But the decorum, duration, and many rules of the game bored him so deeply that he decided he would rather not play again. It was a decision that he now regrets.

During an Amateur Athletic Union basketball game in 2008, Propper met Russell Makofsky, a man more than 20 years his junior. A mutual friend had introduced him as a potential basketball coach; instead, the young man recruited Propper to join his chess company.

In the two years before meeting Propper, Makofsky said their members played chess and made T-shirts, and that was about it.

Propper saw great potential in the endeavor. He liked what chess could do for children. Chess is scientifically proven to improve mental skills, so, as a former school board member, Propper thought they should get more children interested in learning to play chess. “I wish someone would have taught me chess right,” he said.

Six years later, he still plays very little chess. Mornings are spent in front of a computer screen, as he steals moments for his bowl of almond oatmeal that has long grown cold. Propper focuses on the business side of Chess NYC, the management, marketing, and a lot of the administrative work.

In 2010, Chess NYC took over the Village Chess Shop. The location also happens to be a few yards away from Chess Forum, which a former Chess Shop partner opened in 1995. Although there were reports of a feud between the two chess stores, years of rancor fade as both now focus on a common goal.

“We feel like nothing happened now. It’s all in the past,” said Imad Khachan, owner of Chess Forum. “It was an issue between the old owners.” Both stores agree they don’t want to lose the next generation of potential chess players.

Propper runs the Village Chess Shop Academy at its headquarters inside the Zinc bar in Greenwich Village. Yes, a bar. The burgundy walls of Zinc hear the sounds of jazz in the evenings, but by day, the sound of chess pieces tap like raindrops throughout the room.

The key part of making chess fun is the energy of the room. A boy raises his hand for help. A chess assistant walks over. In an expressive and lively voice, he recommends and explains a chess move.

Among the company’s 30 coaches and assistants, you’ll find eight grandmasters, and a Sudanese refugee chess master whom Propper had found working as a security guard at a garage in Virginia.

Their team has a mission, for Propper wants to “Americanize chess.”

Americans have played chess since the horse and buggy era. U.S. aficionados introduced a national chess competition in 1900. But in Propper’s view, this has not placed chess in the American pantheon of popular games. And he wants to change that.

Propper would like to see chess become as American as soccer. “In the 70s, soccer was the game the kids who didn’t make the football team played,” Propper said. Today, nearly every high school in the country offers soccer.

With the mainstream Soccer Mom and the replacement of football with soccer in some communities, Propper is looking to learn how Americans adopted soccer as a popular sport.

Chess, on the other hand, has not made similar inroads in American culture. Not physically active and demanding intense focus, for many active Americans the game might be called boring.

Propper said he is bringing the “basketball mentality” to chess: adrenaline, excited voices, and pizza.

Chess NYC coaches emphasize teaching the game in an active and entertaining way. “We’re using a cooler language to teach chess,” he said. For the all-girls’ chess lessons, there’s bracelet-beading time in between games.

The company also holds all-girl chess “parties,” an all-girls championship development program, and all-girls national competitions and chess camps. “We really want to get little girls to learn to love chess,” he said. “When you think of chess you simply just don’t think of little girls. But it shouldn’t be that way.”

The Future of Chess

The coaches visit around 50 institutions, primarily schools in the NYC metro area. This year, they began chess lessons at the Ella McQueen Reception Center for Boys and Girls in Brooklyn, a detention center where children stay for 14 days.

Chess NYC also visits a homeless service center on 32nd Street. Propper thinks chess works well in after-school programs. They are in the middle of starting a nonprofit division in hopes of getting the funding to teach at schools, which cannot afford after-school chess programs.

“We don’t want to turn anyone down,” Propper said. “There are some [schools] that we go to anyway even though they can’t pay for it.”

Khachan, the Chess Forum owner, has a different take on what it means to play chess in America. It’s not that it was never Americanized, but that it’s a part of the old America. “It used to be that all night long there was nowhere to sit in a chess club,” he said. Now, as video and bookstores fold, so do some older chess stores.

“Everything is done on the computer,” Khachan said. “But that’s okay, because I believe one day there will be another Bobby Fischer.”

Many chess lovers recall when chess prodigy and grandmaster Bobby Fischer at 13 played the “Game of the Century” in 1956. “He was the last American chess player to become a world champion. He was a local hero for people to look up to, but that era ended in the ’70s,” Khachan said.

Today, the world chess champion title belongs to Magnus Carlsen, a 23-year-old Norwegian grandmaster. Chess NYC invited Carlsen to play with their summer camp students in 2012. They paid for his expenses. “The kids felt really inspired when they played him,” Propper said. A 6-year-old that had played Carlsen went on to win the national chess championship for his age group that year.

Propper sees his job as connecting chess with the lives of American children. “We’re here to entertain, to motivate, instill a culture.” he said. “The kids have to want to learn, so a big part of our job is to entertain.”