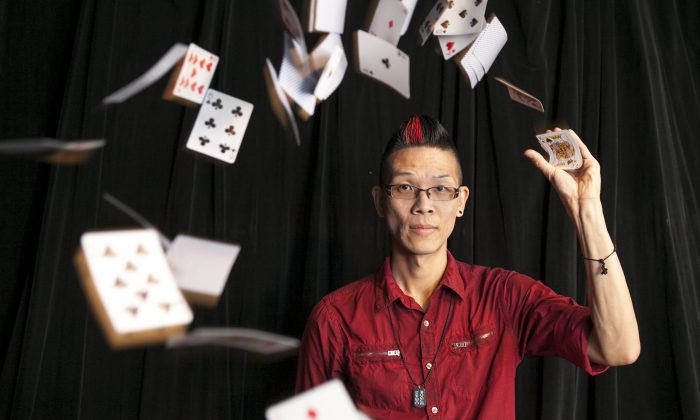 Roger Quan, also known as Rogue, at his magic shop in Elmhurst, Queens, on July 15. Rogue has performed his tricks on “America’s Got Talent.” (Samira Bouaou/Epoch Times)
New York

This Is New York: Magician Rogue Overcomes Insecurities on ‘America’s Got Talent’

NEW YORK—On a recent episode of “America’s Got Talent,” Rogue, a lanky, Asian male, politely asked former Spice Girl Melanie Brown to shoot him in the head with a staple gun.

She pulled the trigger.

He asked her to try another gun. She knew she had filled one of the guns with staples, and she could tell by its weight that the next one she picked up was loaded. Brown, growing increasingly nervous, obeyed and pulled the trigger again.

Rogue flinched. She gasped. He laughed.

The crowd cheered. Miraculously, Rogue survived his staple gun version of Russian roulette, a deadly game of chance with guns. The judges unanimously agreed that Rogue’s illusion had enthralled them. And he advanced to the next round.

The true identity of the charmer of the evening was Roger Quan, an unassuming 35-year-old from Queens. But he prefers to go by Rogue. Roger does not sound very magical.

Rise of a Magician

New York City has always attracted those who do otherworldly tricks; the famed Martinka brothers set up their first shop in 1877, in what is known as Chelsea today. The shop is said to be the oldest magic shop in the United States.

In recent years, it is said the Rogue caused the increased interest in magic in the city.

“He’s a major influence,” said Luis Rivera, a magician. “He’s the master of all of us.”

“Without this place, a lot of [magicians] wouldn’t have a place to go to,” Rivera said. “A lot of guys dedicate the beginning of their magic experience to him.”

Some of his students went on to become teachers. Yet until recently, Rogue only pushed his protégé magicians to reach for the stars, but never himself.

He is good at his craft, and is genuinely kind and humorous; his ring tone is the babble of squeaking minions. But he is a quiet perfectionist with low self-esteem.

“I’m not a competitive person,” he said. “I guess I just didn’t think I was that good.”

He had to first overcome some self-doubts with roots in his childhood.

Rogue, son of Chinese immigrants, was named after Yankees player Roger Maris. He was the embodiment of the American dream.

What does that mean anyway? Rogue dreamed of being a magician. It was a dream, and he was an American. His parents were not enthused, but they supported him anyway.

His mother, in some ways, was a dreamer, too. She was a seamstress who made most of his clothes growing up. In her free time, she folded intricate origami and sold them for a $1 each. She donated the proceeds to charities.

Rogue’s mother passed away recently and never got to see him perform on “America’s Got Talent.”

Rogue believes that the little things that happen in life are a part of the tapestry of fate.

As a child, Rogue had a gift for spelling. He was supposed to attend a spelling bee at age 12, but he was hit with pneumonia and missed the competition. “If I had won that spelling bee, that may have led to scholarships,” he said. “Maybe I wouldn’t have gotten into magic.”

If he had had siblings to play with, he might not have gotten into magic, either. Magic was a solution for loneliness. He was a scrawny boy who was bullied at school. He started learning magic tricks to make friends.

He never thought it could become a career one day, or that it would lead to some fame.

For most of his life, he worked ordinary jobs. He worked at a gas station; he worked as a PR representative; he taught ESL English; he did voice-overs for an independent film company; he drew cartoons for newspapers.

He also found time to do free shows in the streets and in his basement in Jackson Heights. “There were people coming to my apartment from all walks of life,” he said. “It was a little odd sometimes.”

In 2000, he got around to setting up his own magic shop, a mysterious little store with velvet black and red curtains. It’s filled with escapology tricks, vanishing microphones, and wallets that catch fire.

“Wipe the lighter fluid off your hand before your light the lighter,” his employee warned.

“No it’s fine I won’t get burned,” Rogue said without looking up.

“I have been burned so many times,” Rogue said. “This is nothing. I eat fire.”

Paulina Gonzalez, his fiancée, has played a large role in turning his attitude around.

“I told him if he didn’t audition [‘for America’s Got Talent’], I would never talk to him again,” Gonzalez joked.

They met in the subway, when Rogue was performing a trick that turned dollar bills into hundreds.

They coincidentally met again at a party, even though Rogue does not ordinarily perform at house parties. He attributes it to fate.

Recently, Rogue and Gonzalez opened a magic bar called the Rogue Magic Bar at Panda Asian Bistro, where diners drink, eat, and watch a magic show. The bar is in an Asian fusion restaurant in Rego Park, Queens. They plan on creating a franchise one day.

He believes that all the events in his life led up to him becoming a magician.

“I love what I do, nothing can compare to the feeling that you have when you know your audience is entertained and happy,” he said. “I think that is the purpose of all of this—to make people happy.”