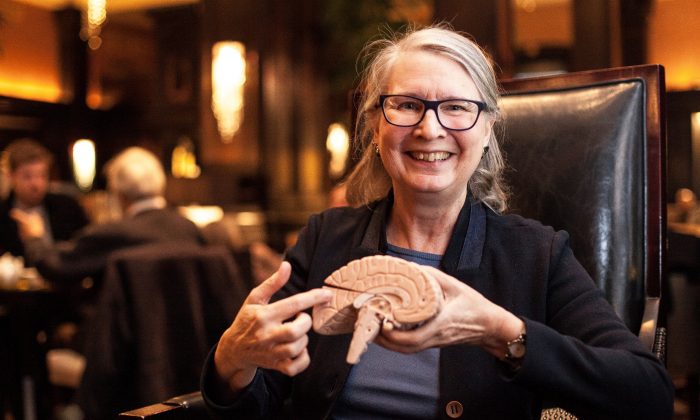 This Is New York: Lucy Brown on the Neuroscience of Love

NEW YORK—To Dr. Lucy Brown, dopamine cells are the most beautiful sight in the world. When she looks under the microscope she sees a universe of stars. The dopamine cells are like florescent green stars, she said, stars with little oblong arms. More important, dopamine is a neurotransmitter associated with the sensation of falling in love.

Brown, 68, is a neuroscientist and professor at the Albert Einstein College of Medicine. She lives on City Island, a quiet, maritime community filled with fresh seafood restaurants and yacht clubs. Although a New Yorker for 48 years, Brown still finds a stroll through Times Square one of her most joyous things to do in Manhattan. The flashing lights remind her of neurons dashing along axons.

Brown once majored in philosophy. She views scientific inquiry through contemplative eyes, brightened by black cat-rimmed glasses. She broke ground as one of the first neuroscientists to study the brain in love. She conducted the research with her best friend, Helen Fisher, whom she met at a menopause conference some years ago.

Fisher teaches Biological Anthropology at Rutgers University and also serves as chief scientific adviser to Match.com. The two scientists posted their 15 years of findings on their website,  The Anatomy of  Love. Clinics have used their studies to better understand types of drug addiction and depression that find their source in heartbreak.

At her age, Brown feels that she has something important to tell the world: it is okay to feel heartbreak. In fact, it only happens because you need it to happen. Brown said there is a physiological explanation for everything, and if more people understood the physiology of their emotions, perhaps the world would be more at peace.

That is the premise of her current project—a virtual, giant, walk-through brain.

She doesn’t just want to disclose her findings to academics who read scientific journals. Brown and Fisher are currently working on The Virtual Giant Walk-Through Brain, which will be a website that allows visitors to take a virtual tour through the human brain in a series of 3-D animated games.

It will take a user through the brain’s many pathways, factories, and circuits that create our memories, vision, and feelings.

Part One, with a planned launch in September, will tour the limbic system—the part of the brain that controls our emotions, motivation, and long-term memory.

In the next five years, a series of games on the visual system, memory system, and clinical issues will follow. “It’s a never-before-attempted way to teach about the brain,” Brown said. “You can teach difficult anatomy in the context of romantic love, which is something everyone is interested in.”

The brain scans from years of research on romantic love, rejection, and long-term attachment show that the act of falling in love is controlled by the same part of the brain that controls when to breath and swallow. “Love is in the most basic part of our system, the same system that controls our swallowing. It’s that basic,” she said. “Nature built it as a part of our survival mechanism.”

She knows something about surviving depression. In some respects, Brown enjoyed a bucolic childhood on a farm in Cambridge, Mass. It was a childhood filled with the warm smell of buttery milk, fresh and slightly frothy, collected in stainless steel buckets. It was a childhood spent playing with the soft ears of furry animals.

Then, when she was 7, her mother passed away from breast cancer. Her father fell into depression, and she had to spend a part of her childhood with a guardian, a Harvard professor and friend of the family. Every evening at 6 p.m., she and her guardian would discuss what books they were reading. It greatly influenced her intellectual pursuits.

Profound grief befell Brown when her husband of 33 years passed away eight years ago. A mutual friend also lost his wife around the same time. They often met to talk about what it was like to lose a long-term spouse.
“Suddenly, we were in love with each other,” she said. When she realized she had feelings for him, she had her brain scanned. “My brain showed that I was very much in love.” They’ll be married four years in August.

“It’s part of nature’s imperative for us,” she said. “You can fall in love again if you need to.”