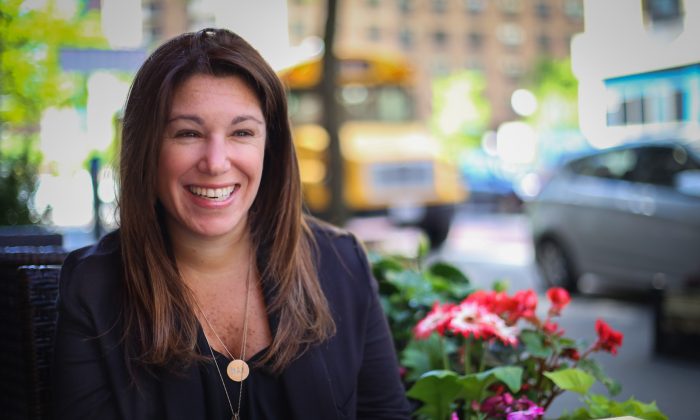 Leslie Venokur, co-founder of Big City Moms, at the Gracie Mews Diner on the Upper East Side of Manhattan on May 20, 2014. (Benjamin Chasteen/Epoch Times)
New York

This Is New York: Leslie Venokur on Urban Motherhood

NEW YORK—Leslie Venokur, co-founder of Big City Moms, is like a celebrity among mothers in New York City. When she takes off her sunglasses on the street, women walking by greet her with warm hellos. The Upper East Side patio of the Gracie Mews Diner is her kitchen and her office, for she lives in the apartment directly above the restaurant. Beneath a bright red umbrella, and beside a row of rubicund and violet flowers, Venokur organizes the events for one of the largest parenting communities in the nation—Big City Moms.

Rather accidentally, in 2004 Venokur and her older sister Risa Goldberg started an information sharing, social network for mothers in the city. It began as an informal dinner gathering on a moderately warm evening in April. Eighteen women—mostly strangers—shared secrets of urban motherhood: which subway station has working elevators for strollers, which restaurants are the most child-friendly.

Since then, their informal network has evolved into a flourishing business. Although the two do not have business degrees—Venokur studied retail merchandising, while Goldberg studied communications at Syracuse University—they have stumbled across a business model with a never-ending demand: there are babies born every day.

More importantly, the concept rose out of a need to solve an age-old problem. Maternal loneliness.

As playwright Adrienne Kennedy wrote in her autobiography, women with small children are a part of the “lonely crowd.” This can especially be true in New York City.

“Unlike the suburbs, where it is often easier to meet new parents, big cities do not afford as many opportunities,” said Dr. Susan Newman, a social psychologist who specializes in parenting. “Co-workers—an urban working mother’s former support system and way of life—are at their jobs, and many women feel a profound loss of the work routine and the camaraderie it affords.”

The purpose of Big City Moms, ultimately, is to lessen that loneliness. “Without family close by to rely on for comfort and support, Big City Moms offers a sympathetic place to turn to. … It is a godsend to those who are or will be new to parenting,” Newman said.

“My first few months were very lonely, I looked forward to the [Big City Moms] lunches more than anything,” said Michele Zipper, 38, a Big City Moms member who resides on the Upper East Side. “The community in New York City becomes even smaller to you when you’re a new mom. They have been wonderful to me because I have three kids, and I go through issues of various stages.”

During social events, Big City Moms group its members by due dates; it’s about building a community. Expectant mothers can discuss and share similar experiences; their children can grow up together.

“Sometimes we don’t see some mothers for three years,” Venokur said. “Then when we see them again they say, ‘Thank you. I met my best friend at one of your events.’”

Within 10 years, Big City Moms has become the most popular source for information for new mothers and parents—everything from advice on nutrition and breast-feeding to life balance. They hold the annual “Biggest Baby Shower” event, which includes 1,500 parents and 100 businesses.

“That’s a lot of hormones under one roof,” Venokur said.

Expansion to Other Cities

Ten years ago, before the explosion of social media, the sisters made known their dinner invitations by word of mouth; they invited women they saw on the street pushing strollers. To their surprise, 18 mothers showed up for the first one.

Little did they know they would soon be planning similar events for thousands. Almost immediately, companies that sold children’s products began contacting them.

They began partnering with celebrities like Jessica Alba, Tia Mowry, and Kelly Rutherford. Today, Big City Moms has over 300,000 members.

“On the plane to L.A. I saw all these people from the businesses we were working with,” Venokur said. “It was surreal to think that they were flying to the other side of the country for something we created.”

Although Big City Moms has expanded, it has always stuck to its starting point, which is to be there for the mothers on a personal level. Goldberg still personally responds to each email that could be anything from questions about stroller brands to nanny recommendations.

“She doesn’t have the time, but she finds time for it anyway,” Venokur said.

It’s a trait the sisters inherited from their father, a dentist who would plow snow for his neighbors, answer anyone’s question, and research the answer to questions he did not have the answer to.

The sisters grew up in Plainview, Long Island. When they were younger they played store, pretending to run a candy store.

Each morning they go to a 45-minute spin class to maintain their sanity. They are both fans of SoulCycle, but they go to different classes; otherwise, they will end up talking about business.

“My philosophy is to leave your mark in the world while doing something that you enjoy,” Venokur said.

Before Venokur worked at Big City Moms full-time, she had a nine-to-five job as senior director of retail at Kidville. Her job required her to travel all over the country. Once during a business trip, she got lost while driving in the dark on a snowy mountain road in Oregon. She feared she would lose her life that night.

It was then that she decided to quit her corporate job and work on her own children clothing store business, Pretty Please. Eventually, she quit that to work on Big City Moms full time. “It’s very meaningful work, you’re giving back to the community,” she said.

Goldberg agrees. In the little free time that she has, she likes to read. The last book she read was the biography of Steve Jobs, and what impressed her about Jobs was how he made the world a little easier to live in.

“He made the world a little bit easier to live in—that’s what I’d like to do too,” Goldberg said. “We produce our events to help educate and inform these new parents to make things a little easier for them.”