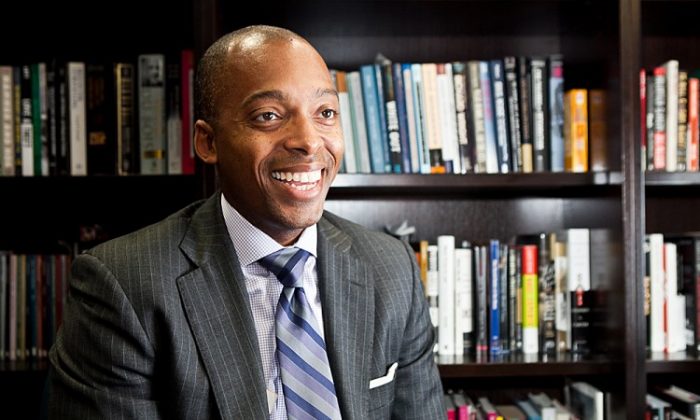 Dr. Khalil Gibran Muhammad, director of the Schomburg Center For Research in Black Culture at the center in Harlem, New York on Oct 24. (Amal Chen/The Epoch Times)
US

This is New York: Khalil Muhammad, Keeper of Black History

NEW YORK—Peering at gushing lava from a helicopter high over Mount Kilauea, Khalil Muhammad, at age 15, stuck his hand out to snap a photo.

The volcanic eruption was an unexpected change in Muhammad’s itinerary, on his family vacation in Hawaii, 1987. But that’s what holidays were like for the son of Pulitzer Prize-winning photojournalist, Ozier Muhammad.

Muhammad learned much more from his father than how to photograph extraordinary views. He attributes a large part of his success to the events and literature he was exposed to as a child.

His father raised him in an environment surrounded by books. From a young age, Muhammad was influenced by authors such as Graham Greene, a moral–political activist; Alan Paton, an anti-apartheid activist; and Eugene Genovese, one of the first historians who looked at slavery from the perspectives of the enslaved.

His father won a Pulitzer Prize for his photos of the Ethiopian famine in 1985.

Ozier Muhammad captured the images of haggard children, lines of women waiting for food at a dislocation camp, and a man pleading to get help for his dying wife as their child sat quietly in the background.

“My father gave me the concern and care for what was happening in the world, and the appreciation for the past,” Muhammad recalled recently.

Today, at age 40, Muhammad is the director of the Schomburg Center for Research in Black Culture. The center is a research unit of The New York Public Library, and it has been collecting black historical materials for more than 80 years.

Muhammad may have learned about the world from his father, but his mother taught him the most important principle.

After his parents divorced, Muhammad lived with his mother in Chicago, who was a teacher in a low-income neighborhood.

“She taught me to respect people despite their shortcomings, whether that be a lack of education, or the way they present themselves,” he said.

Many of her students lacked supervision and guidance in their lives and his mother used to bring them home after school and look after them until their parents got home.

She had students who didn’t own winter clothes and students who were malnourished. Although the children lived in such conditions, she never judged them or their families; instead, she sent them presents during holidays.

“That was very visible to me as a child, it was clear to me that these people were a part of our lives,” Muhammad said. “That sense of compassion is very much a legacy of my mother.”

Muhammad graduated from the University of Pennsylvania with a bachelor’s degree in economics in 1993. He had always done well in school, and was fascinated with macroeconomics. Nonetheless, something was amiss.

Affirmative Action, the Rodney King incident, and Martin Luther King’s legacy, were hot debates during Muhammad’s undergraduate years; all events that would later change the course of his life.

A columnist at his school’s newspaper wrote a critique of Martin Luther King, claiming the he was a communist. He also wrote about how black students were not qualified to be at University of Pennsylvania.

“The same conversations were happening at Brown and Dartmouth, these were the cultural wars of the 1980s and 1990s,” Muhammad said. “I was curious about the merits of the opposing viewpoints, and in someway I felt inadequate to fully engage because I had been focused on economics.”

Things came full circle for Muhammad last April when Rodney King visited the Schomburg Center last April to talk about his memoir, “The Riot Within.”

Rodney King’s brutal beatings by the Los Angeles police in 1991 became one of the most infamous, racial court cases in the United States. King’s name often brings up painful memories for African-Americans.

“The Rodney King that most people had come to know was at the epicenter of this really painful moment,” Muhammad said.

The event touched a lot of people in profound ways, Muhammad said.

“Many people felt that it was because of what we do here, integrating the past, bringing authors here to talk about their lives and books … that people got to see [King as] a very humble, everyday, person who had been swept up in a historical moment while never intending to create one.”

It was an invaluable experience to see this side of him, just a few months before King passed, Muhammad said.

After serving as an assistant professor of history at Indiana University, Muhammad assumed the director position at the Schomburg Center in July 2011.

The center serves as the world’s leading archive for black history, holding over 10 million artifacts.

Its materials are preserved for public viewing, and the center often holds exhibits that promote the history and culture of peoples of African descent.

This past September, the center held an exhibition that celebrated the 150th emancipation proclamation where it exhibited Abraham Lincoln’s handwritten draft.

“That document raises questions, are we living up to those ideals and principles?” Muhammad said.

Muhammad thought of a book talk held earlier this summer, with Rachel Swarns, author of “American Tapestry”. Swarns wrote about the first lady Michelle Obama’s lineage, exploring her family history all the way back to slavery times.

After the talk, a homeless woman stood up to ask the first question.

“I might lose my spot at the shelter tonight for being here because this event goes beyond the time I am allowed to go out. What can you do to help people like me be able to come to events like this?” Muhammad recalled her asking.

“We were having a conversation about the first lady, and then this homeless person who is here and a part of the world, who is a representative of our unresolved problem of poverty and affordable housing, is asking for help,” he said.

“It was reflective of where we are in this country, in terms of continuing to ask the question, what does freedom really mean? It just sticks out in my mind that … we can’t get too far ahead of ourselves … and it is why a place like the Schomburg Center is so important,” Muhammad said.

Today, Muhammad dedicates his time to empowering black youth through culture and history.

“I want to make sure every young person learns how to use the tools of historical literacy to think about the past, and understand where they are in the world,” he said. “And reimagine what the world could be.”