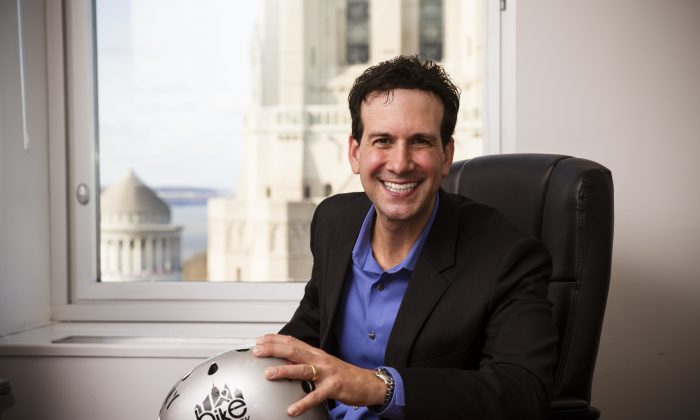 This Is New York: Kenneth Podziba, President and CEO of Bike New York

How cycling, letting go, and karma merge
By Amelia Pang

NEW YORK—Even before Kenneth Podziba became the president of Bike New York, he thought the most beautiful and powerful moments in the city happened when the city ran without cars. During the TD Five Boro Bike Tour, 32,000 souls would cycle through 40 miles of carless streets. There was something primal about cycling through the boroughs, he said, about coming into contact with so many ethnic neighborhoods without sharing the road with motor vehicles. There was a feeling of conqueror as one rode across the city’s bridges without speeding automobiles.

Bike New York is a nonprofit that plans the annual TD Five Boro Bike Tour, the largest cycling event in the United States. When Podziba joined Bike New York in 2010, he helped the organization gain its nonprofit status and expand its free educational biking programs.

Yet when Podziba resigned from his position as the sports commissioner of New York City in the same year, one of the concerns he grappled with was what he would do without the city car.

He recalled the first day he biked to his new job. He could literally smell the flowers. There was the optional leisure activity of going a second round through Central Park if he wanted to. In six months, he lost his belly and 12 pounds. But the beauty of biking is that one has to let go of fear and disbelief to learn how to ride.

Tempering the disbelief of others has been a pattern in Podziba’s life.

His fifth-grade teacher once told the entire class that the likes of Podziba would never go to college. Podziba went on to write the No. 1 thesis of his class when he received his master’s in real estate development from Columbia University.

Department of Housing, Preservation and Development assigned Podziba to plan the $1 billion development of Metro Tech Center, thinking one might as well assign the rookie the project that was least likely to succeed. The center flourished.

He excelled as New York City’s first sports commissioner, even though he had been bad at sports as a child.

Podziba was the official sports commissioner under the Giuliani and Bloomberg administrations and an interesting choice. Apart from biking and skateboarding, he was not particularly inclined toward sports.

Podziba was that boy who was the worst player on the baseball team. “Parents even told me I was bad,” he said. As a child he was tall, lanky, and lacking in coordination.

In politics, he started off as a receptionist for Giuliani’s mayoral campaign. “Hello friends of Giuliani, may I help you?” he would say. After discovering he had a financial background, he moved on up to campaign contribution analyst, and then opposition researcher.

It’s a noteworthy story how his background in finance evolved.

Podziba is a person with tremendous tenacity. After completing two bachelor’s degrees from Syracuse University’s communication and business schools, he dabbled in real estate. Then, he set his mind on getting a job with the Department of Housing, Preservation and Development. The department rejected his application. It did not accept people without a city planning graduate degree.

But Podziba continued to call, and call. And he called some more. He visited the department office. He made rational declarations of why the department should hire him. Eventually, they did. And that was how he came about planning the development of the Metro Tech Center.

After joining the Giuliani administration, he worked briefly as the deputy commissioner and chief financial officer for the NYC Taxi and Limousine Commission. He worked on getting taxis to convert to natural gas—and created the talking taxi program, which consisted of recordings of celebrities reminding passengers to buckle their seat belts and take their receipts. There, he met media personality Dr. Ruth Westheimer and they have remained friends since.

He recalled the day Giuliani called him to his office in 1998 and told him he was to become the sports commissioner.

“Is there even such a thing?” Podziba had asked.

“There is now,” Giuliani had responded.

It propelled Podziba to visit the batting cages at Chelsea Piers. He was still hopeless, but he didn’t need to be good at baseball. As the sports commissioner, he focused on using sports to boost the economy. He helped bring events, such as the MLB All-Star Game and NFL Kickoff, to New York City.

It was, however, the inspirational speeches that he gave at schools and youth sporting events that made him an exceptional sports commissioner. He was a sports commissioner who resonated with the children picked last on teams. He would tell them it didn’t matter, to just have fun, and that there are guaranteed to be other things that they are good at.

Podziba, 49, is deeply philosophical and thoughtful. He radiates an aura of positivity, and has one of those rare, genuine laughs that resound.

“I always try to do the right thing because I believe in karma,” he said. “I trust that it will come back and things will work out.”

When told his statements sound Buddhist, he took it as a compliment.

Podziba sees himself as a spiritual person. He is Jewish and goes to the synagogue from time to time, but he doesn’t think his spirituality necessarily stems from religion. “It’s something that comes from within,” he said.

When meeting Podziba today, one could never tell that he was molded from a childhood of immense insecurities.

He did not fare well in school in Oceanside, Long Island. He was a boy who was bad at sports.

As a teenager, he decided he wanted to be a father one day. The idea of being a good father himself was therapeutic for his unhappy childhood. “My parents tried their best, but they didn’t recognize some signs …” he trailed off.

After Some Soul Searching

Podziba did not anticipate that Bloomberg would run for a third term. “I did some soul searching,” he said. Podziba resigned as sports commissioner before Bloomberg’s term was over. He needed to spend more time with his children.

Today, in his spare time, Podziba is jumping on trampolines and pretending he’s King Triton as his daughters play little mermaids.

His wife, children, and biking were what got him through the hardest part of his career last year, when Bike New York sued the city.

“People thought I was crazy to sue the city,” he said. “No one sues the city. They’re our partner.”

The city said Bike New York needed to pay $1 million worth of fees in order to hold the TD Five Boro Bike Tour. If they had paid, they would have to start charging for their pro bono educational programs such as “How to Buy a Bike,” “Winter Riding 101,” “Commuting 101,” “Bike Maintenance,” and “Street Skills.”

“My obligation is to all the people we serve, the 15,000 people we provide free bike education for,” he said. “That’s who I was thinking about when we fought back.”

“I have a clear conscience,” he said. “For all of my decisions, I really think about what the repercussions are, and if I’m hurting anyone.”

Against all odds, they won the lawsuit and saved $1 million dollars. Yet just when he thought he got past the hard part, the bombs set off at the Boston Marathon. Suddenly, he was dealing with helicopters and snipers on the roof on top of other preparations for the bike tour.

Although helicopters and snipers will still be on the roof this year, 2014 has been a much smoother year for Bike New York.

He has been enjoying one of his favorite parts of the job, volunteering to teach children and adults how to bike. He especially enjoys teaching the grown-ups. “Adults are so scared, when they finally break out of their fear it is a powerful moment,” he said.