This Is New York: Kate Shin, Owner of the Elite Waterfall Mansion, on the Life of a Place 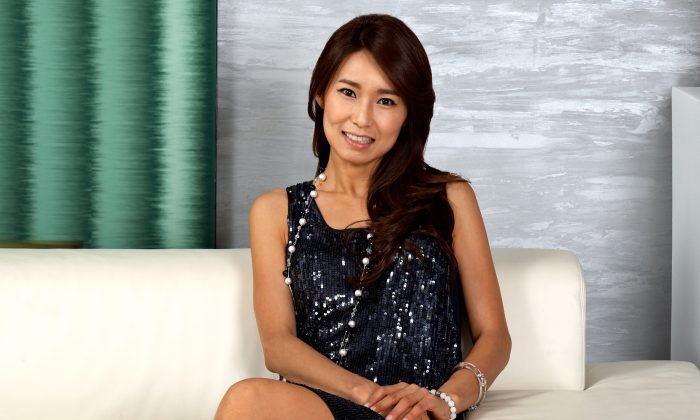 NEW YORK—The light from Waterfall Mansion seeped through its leaf-patterned, steel gate, scattering shadows of leaves on the concrete sidewalk. Faint sounds of laughter and music flowed from the 80th Street mansion on summer nights, as Kate Shin, the owner of the mansion, made two worlds converge.

The multimillion-dollar building is not only a place where the elite go, such as Ivanka Trump and acclaimed museum owners, it’s also a platform for emerging artists.

Perched on a white leather couch, Shin, a superstar financier turned entrepreneur, reflected on her work on the mansion. As a developer, she looks beyond the physical property. Buildings need life, too. And the life of a building is sometimes its history.

Famed fabric designers D.D. and Leslie Tillett once lived and worked in this mansion, creating designs for figures such as Jacqueline Kennedy.

It was renamed Waterfall Mansion after Shin purchased the building in 2008, restoring and modernizing it with architect Toshiko Mori.

The mansion is named after its 22-foot-high waterfall. The idea was inspired by her mother, a developer as well, who designed waterfalls in each of Shin’s childhood homes.

Shin lives her life by the philosophy of water. Water travels from up to down; water fills in holes.

She went from managing billions of dollars for a large firm, to starting her own real estate company from scratch.

Shin was an investment banker and a director at real estate private equity firm Angelo, Gordon & Co., which had a managing fund exceeding $20 billion. She left the large firms behind to start her own real estate company, Wemi:t LLC, which restores and modernizes Manhattan townhouses and mansions.

She could sell the mansion as is for millions, but she took it off the market. She is not finished filling it with life yet. For Shin, her largest assets are the artists. She is rethinking the value of real estate.

“You build a building, but what’s in it?” Shin said. “These creative people are my assets.”

“People remember emotional experiences. When emotion is attached to a place, that is value,” she said.

“She helps people more than she helps herself,” noted a friend who did not wish to be named.

During the day, natural light shines through the mansion’s 14-foot floor-to-ceiling windows.

The Waterfall Mansion is LEED certified, which means it’s designed with maximal energy efficiency and sustainable resources. The ceilings are higher on upper floors, which creates more space and light.

There is a grass-covered roof terrace with a wooden deck, a 1,000-bottle wine cellar, and a 2,300-square-foot spa lounge.

But it’ s not about the square feet, Shin said, it’s about the life of the building. That’s why there’s a lighting system of a professional art gallery.

To respect the building’s history, Shin created an art gallery inside. The KateShin Gallery showcases exhibitions that feature emerging artists. She often collaborates with other galleries and museums.

Artists enjoy the opportunity even though they do not get their own gallery.

Shin has a strong artistic side to her as well. She received professional opera training as a young girl. From 4 to 7 years old, Shin sang opera on television. She attended the Yewon Middle School of Arts, one of the most prestigious art schools in Korea.

But she didn’t like the attention. “I just wanted to live like any other kid,” she said.

Even today, she is still modest. She attributes her success to the market, her partners, a building’s history, but never her own talent.

“It’s not that I’m a genius,” she said. “I formed an art gallery in this mansion because I want to respect the history of the site.”

After her affair with music, Shin went on to business and real estate. She received a Bachelor of Arts in finance and marketing from Stern, a Master of Business Administration in Yonsei University in South Korea, and a Master of Science in real estate development from Columbia University.

It was the natural course. Her father had owned 13 mega companies in Korea in broadcasting and manufacturing. Shin and her mother, a developer and operator, took over the businesses after he passed away.

Shin began working 20 years ago, a time when Korea’s labor costs increased and companies turned to China for manufacturing. Her father’s manufacturing facilities were shut down, and she and her mother developed the buildings into storage facilities and residential areas.

She always knew she would want to go back to real estate one day.

Shin moved to New York at age 16 to attend the United Nations International School. She struggled with her identity for some time.

She used to see her cultural difference from her colleagues as a weakness. “I thought that was my handicap,” she said. “I have to try 200 times harder than other people because of that.”

Then, she realized “handicaps” can be a competitive advantage.

“I focus on what I can give the most, so I became the connector for Asian opportunities,” she said. She looked after the Asian market for Angelo, Gordon.

Shin received complaints from Upper East Side neighbors when she first began renovating the mansion with classic Asian designs.

“People don’t like to see changes,” she said. “They see change as a risk.”

To show her interest in maintaining the value of the neighborhood, she paid for the entire architect fee for her neighboring building’s chimney construction.

“Instead of me complaining about it, I tried to find a way to work it out,” she said. “Keep finding the way. There’ s always a way.”

Today, her neighbors have become her friends and the real estate value of the block has gone up.

Shin finds joy in silly little things, like using her electric fly squatter. People remark that her aura raises the moods of the depressed.

She has enough energy to attend 13 meetings a day. Shin has a simple secret to deal with stress: repeat thankful words. “When I am stressed, tired, or heartbroken, I take a few minutes to repeat to myself how blessed, lucky, and thankful I am,” she said.

It’s a harsh world; there are people who try to rip her off.

“Sometimes I repeat that to myself a hundred times at a time, until my anger goes away,” she said. “Whatever anger or resentment I have, it doesn’t last for more than two days. I focus on what I can do to make it better.”

CORRECTION: An earlier version of this article incorrectly stated that Kate Shin’s real estate company Wemi:t LLC has a managing fund in excess of $20 billion. The managing fund was at Angelo, Gordon & Co., where Shin was an investment banker and a director. Epoch Times regrets the error.

Amelia Pang
Journalist
Amelia Pang is a New York-based, award-winning journalist. She covers local news and specializes in long-form, narrative writing. She holds a Bachelor’s degree in journalism and global studies from the New School. Subscribe to her newsletter: http://tinyletter.com/ameliapang
Website