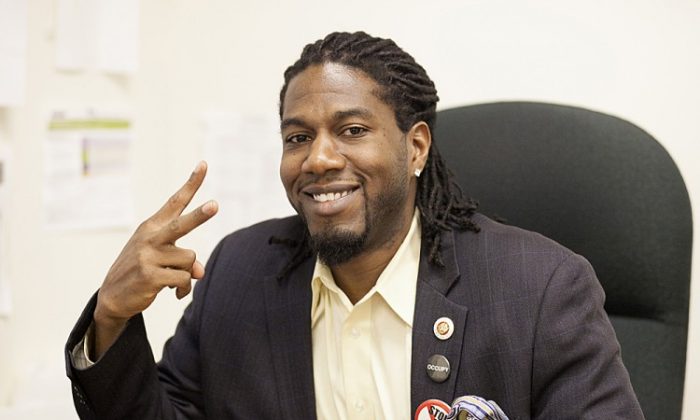 This is New York: Jumaane Williams, Perseverance Pays Off

NEW YORK—A melodious voice booms from the beige corridor on the 18th floor of the City Council office building. Council member Jumaane Williams has just returned from a meeting that ran an hour over time; he’s late for his next two appointments, and copes with it by breaking into song.

“Being a council member is probably the best job for someone with attention deficit [ADD],” he joked. “You’re always bouncing and staying active.”

All jokes aside, Williams has overcome a tremendous struggle with ADD and Tourette’s syndrome. It took him seven years to get a four-year undergraduate degree, and four years to complete a two-year master’s degree. He had to take night school, summer school, and two independent studies in order to pass high school.

And behind Williams’s perseverance, is the influence of a relentless mother.

“My mother was very annoying,” he joked. “She was always involved in everything.” Williams even received Valentine roses from his mother in high school.

“I was hoping it was a pretty girl or something and I opened it up and it was my mom,” he said. “That was kind of frustrating, but it was also very helpful because it’s hard to do wrong things when your mother is always there.”

Williams’s mother was a pharmaceutical representative, or in other words a “drug dealer,” Williams would joke.

Despite being a single mother, she always managed to take enough time off work to keep her two children in check. She was constantly initiating meetings with teachers, principals, and deans.

“My mom amazingly raised two kids who gave her a lot of trouble,” he said.

Williams was a clever child; he knew so much about Martin Luther King Jr. that he would correct his teachers in class. But he struggled in school due to his Tourette’s syndrome and ADD that went undiagnosed for many years. Although he experienced the symptoms his whole life, Williams was not diagnosed with Tourette’s until the ninth grade, and ADD until college.

Williams attended a talented and gifted middle school, as well as the competitive Brooklyn Tech High School. But he almost got kicked out of both schools because he couldn’t pay attention in the classroom.

“It was kind of rough trying to figure out what was going on,” he recalled. “A lot of people didn’t notice and thought it was just a part of me acting up.”

Throughout middle and elementary school, Williams used to visit Grenada every summer to visit his overseas family.

“I have nothing but good memories of learning about their culture,” he said. “They lived in shacks for the most part, a lot of people didn’t have running water, shoes … but people were very happy.”

“We would make up games with the things we had … cut a bat from coconut tree,” he said. “I don’t think kids play that way anymore.”

Williams’s mother kept him busy in the hope he wouldn’t have time to get into trouble.

“But I found a way to get into a little trouble still,” he said.

During the school year, Williams participated in the city high-school choir, attended the Harlem School of the Arts, and performed in theater.

Although he was originally a theater and film major at Brooklyn College, he got involved in student government and quickly changed his major to political science.

“At that point I realized that electoral politics was a really good way to get a foothold and some power to make some progressive change,” he said.

As a council member, Williams takes a special interest in youth and education. He works to create more mentoring programs, extracurricular activities, and homework help in Brooklyn.

“My experience with not doing so well in school and dealing with Tourette’s syndrome gives me a lot more empathy to deal with people,” he said. “Everybody needs help. You can’t just get through life without help.”

People should be given the help they need, but Williams also makes a distinction between needing help and making excuses.

“My mother never let me use Tourette’s as an excuse,” he said.

He plans on running for his council seat again next term.