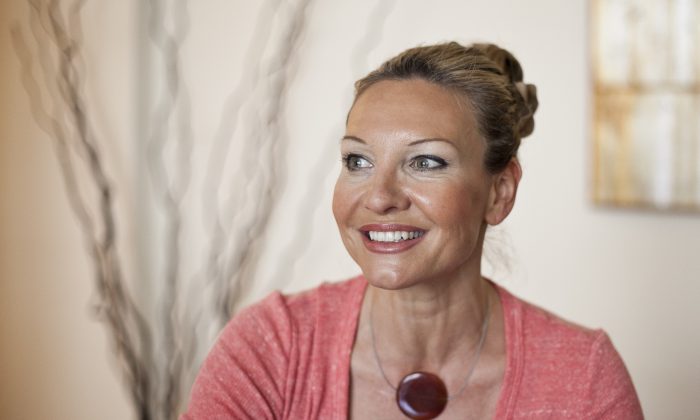 This Is New York: Heike Bachmann, Living in the Moment

NEW YORK—Heike Bachmann had always commuted by bike in New York City, even in the ’90s, a time when it was just her and the delivery guys on the road. They would call her “Mary Poppins” as she biked to work in a skirt, with flowers in her hair and her basket. Indeed, there is something magical about Bachmann that gives her a German Mary Poppins aura.

Bachmann, 49, doesn’t look a day over 30. She sits playfully, with her arms around her legs, revealing a vermillion pedicure.

She has already lived half a century, but Bachmann has managed to preserve a lighthearted, youthful eagerness toward experiencing the joys of life, as well as a love for humanity—despite being very aware of the horrors it is capable of producing.

What is her secret? To live in New York City.

“Go where the energy is,” she said. “New York is brimming with energy. Yes, sometimes it’s too much; sometimes the energy can wear you down. But if you can figure out how to ride on that energy, then New York is just the best place to be.”

Bachmann grew up in Munich, Germany, next to the foothills of the Alps. Her father, a retired German colonel who had joined the army as a young man to support Kennedy as an ally during the Cuban Missile Crisis, did not support her dream to become an actress.

Instead, Bachmann went on to study German literature in college. Afterwards, she pursued a career in publishing for 10 years in New York City, which led to her career as head of marketing in Lexis Nexis Europe in London.

Before becoming a renowned voice actor for clients such as the World Health Organization, Facebook, and Adidas, Bachmann was head of marketing for Lexis Nexis in London. But she was not happy.

“Often in life, we think we know how things should be and we try to force them and control them in a certain way—and we struggle,” she said. “It costs us a lot of energy.”

“I worked tremendously hard and I just couldn’t understand why I couldn’t be happy. At the time I realized I just had to switch course,” she said.

Upon submitting her resignation, the CEO asked her what her plan was.

“And I said the plan is to have no plan for a while,” Bachmann said.

She had spent 10 years working as a publisher in New York, and three years in a corporate position in Europe.

So Bachmann returned to New York City without a plan.

As she was unpacking her boxes in her new sublet, Bachmann listened to a NPR interview with pianist Keith Jarrett; it was an interview that changed her life.

“They had asked him, at what point of your performance do you know what chord to play next? And he said, in music, as well as in life, it’s not so much about knowing what comes next, but being in a state of mind where you don’t need to know what comes next,” she recalled.

“That was wonderful, it confirmed what I innately felt as true but did not dare live all these years. So I opened myself to whatever would come to me,” she said. “I think that’s the beauty. You just have to come here and start with whatever and be open. The city will bring things to you.”

For some time Bachmann did artist management here and there, as well as marketing for a jazz label. One day, it occurred to her that she should call her old voice-over contacts.Voice acting was something she had enjoyed tremendously and been able to do on the side running from studio to studio during lunchtime when she was last in New York in the ’90s working her corporate career.

It all began with an attempt to preserve her German by teaching at an evening language school.

“The phone rang and a voice said, ‘Are you still doing voice overs?’ I hadn’t even done one,” she said. Yet immediately, she was asked to lip sync for a CitiBank video.

“Being German, I prepared like crazy,” she joked. “They booked the studio for three hours, and I showed up and I was done in 50 minutes. That’s when people said, ‘Wow, she can do this.’ I didn’t know myself if I could.”

“A muscle, I don’t even know where it is, I don’t purposely operate it, it’s something that just works,” she said. “Today I have to say, most of the time I go into the studio cold. The door closes, the microphone goes on, I have my headphones on, and something switches.”

She attributes this skill to her propensity to reading aloud as a child.

“I always wanted to do something with words. My father was someone who always read to us aloud. As soon as I could read myself I read aloud,” she recalled.

“Now when I look back, I realize that the common denominator in my life has always been words: wanting to act them out, studying them literature, publishing them in my corporate career. Now I record them,” she said.

It is a freelance job; she has no guaranteed income. But large clients such as the World Health Organization, the MoMA, Facebook, and Adidas have been calling her back for the past 10 years.

Many international companies have been looking for voice actors with an accent to give themselves a global image.

“It just evolved. I never set out to do it, but it’s what New York brings to you if you’re open,” she said.

She recently filmed a local TV commercial and has two commercials running on MSNBC currently. “It’s funny, I wanted to do acting very early on. It’s amazing how all of a sudden it comes my way,” she said. “It’s funny that here in the mid part of my life all these things come back to me.”

“I have learned in my life that I fare best if I don’t plan too much,” she said. “Sometimes I ask myself, where does it go? But as soon as a plan develops, the process becomes destroyed.”

When Bachmann was contacted to do this interview midweek; she had been busy packing for her Middle East trip at the end of the week, as well as juggling a number of appointments. Yet she still decided to squeeze in time for the interview because she said it was important to her to make time for the little enjoyable things in life that come her way.

The love in her life is a mathematician; she met him while dancing mambo at the Frying Pan.

She is going to Iran to visit his family. She spoke of how it is sad how that at the mention of Iran, for many people, the only associations that come up are screaming people and burning American flags.

She said that amid conflict, it is even more important to remember the individual humans who live there and who they are.

“They’re so resilient, they’re wonderful people,” she said. “The love people have there; it moves you at your core.”

“When they brought me to the airport, everybody comes, the entire family comes, even if we are leaving at two in the morning,” she said as she recalled the last time she saw them. “Three cars coming with you even though you can only be in one car. But they all came just for this moment.”

“When you go there you are reminded of a deeply shared humanity,” she said. “It is the joy of life.”