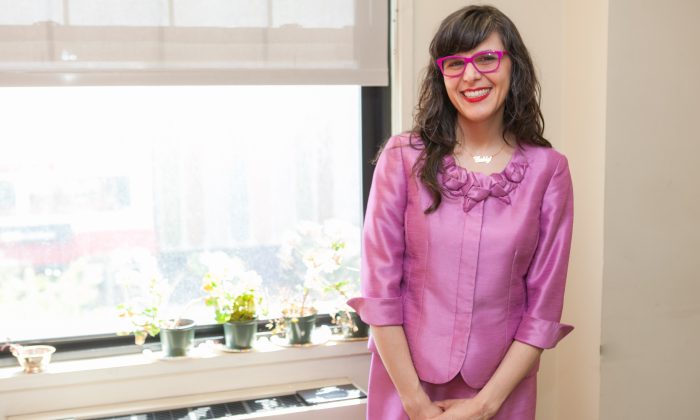 Gabrielle Horowitz-Prisco the Director of the Juvenile Justice Project in her office in Manhattan on Aug. 18, 2014. (Benjamin Chasteen/Epoch Times)
New York

NEW YORK—For 23 hours a day, and for more than 300 days, there was nothing. There was nothing except the screams from nearby cells. The screams that drove the teenaged Ismael Nazario to wail, and press himself against the solid door of a 6-foot-by-8-foot room where he was held in solitary confinement.

There was no human contact sans the stench left behind by former Rikers Island inmates who had occupied that cell.

Nazario was one of the many minors in New York who are imprisoned with adults each year. In 2008, there were 3,570 youth under the age of 18 who were admitted to jails in New York City, according to government data.

New York is one of two states that prosecute 16- and 17-year-olds as adults. Around 100 teenagers are housed in solitary confinement at Rikers Island at any given time, reported the Center for Investigative Reporting.

Earlier this month, the United States attorney in Manhattan released a report documenting Rikers prison guards’ disturbing brutality, including an incident that resulted in the skull fracture of an inmate.

The crime and punishment discourse has shifted from the conventional wisdom that prisons are not supposed to be nice places. Media coverage of the issue has sparked a public outcry, leading to the recent resignation of Florence Finkle, a top investigator at the New York City Department of Correction.

A part of the impetus for the change is due to the behind-the-scenes work of people like Gabrielle Horowitz-Prisco, a small woman with fuchsia glasses.

Horowitz-Prisco is the director of the Juvenile Justice Project at the Correction Association (CA), an independent nonprofit that advocates for prison reform.

At dinner parties, she talks about children in solitary confinement.

“It’s not everyone’s favorite party conversation,” she said. “But I don’t stop. We need to talk about these things.”

Day in and day out, Horowitz-Prisco is speaking publicly, researching, analyzing bills, or testifying at City Council hearings.

The CA is the only private organization in New York that has unrestricted access to prisons.

The organization was one of the first to address the crisis of AIDS in prisons in the ’80s. In recent times, it was involved in the passing of legislation such as the Safe Harbor Law, which prevents sexually exploited children from incarceration for prostitution.

The walls in her office are plastered with drawings from children. A meditation crystal rests on her desk to balance the bleak nature of her work. One may wonder why this former aspiring art therapist from Staten Island, turned attorney, turned policy analyst, cares so deeply about prison reform?

Horowitz-Prisco holds an illustration for an unpublished children’s book she wrote that encourages children to accept themselves.(Benjamin Chasteen/Epoch Times)

In elementary school, Horowitz-Prisco once advocated for her cafeteria to offer peanut butter and jelly as an alternative to hot lunch.

Her parents were schoolteachers and political activists for equal opportunity in education. From a young age, Horowitz-Prisco realized that children are a silent group, in terms of political power.

“Children don’t vote or have a lot of spending power. They don’t lobby. They don’t always have advocates for them the way other groups do. But I really think humanity rests on this. The cost of not caring for children is our collective well-being, the fate of a planet, a society, our ability to be happy,” she said.

She decided to become an attorney during an experience in college, when she volunteered at a shelter for runaway and homeless teenagers.

There, she felt that lawyers and judges were in power.

“I felt that decisions made about their lives were not consistent with their own sense of where they would be safe,” she said.

So she became a lawyer. She worked for the Legal Aid Society and also the American Civil Liberties Union, where she worked to expose the FBI’s surveillance of religious, political, and ethnic groups.

In the end, she decided to come to the CA to work on policy reform, where she met Nazario.

The Human Capacity to Change

After Nazario was released from prison, he became a case manager for the Raise the Age campaign, which argues that psychologically, adolescents are still children, and placing them in the adult criminal justice system has perverse effects.

“He’s a young man that I now work with as a peer,” Horowitz-Prisco said. “Just because a child or an adult makes a mistake, it doesn’t mean that we should perpetually punish them for the rest of their lives.”

For two years, Nazario worked with at-risk youth from ages 12 to 17. He is currently doing similar work with Fortune Society, a nonprofit that provides resources for youth and formerly incarcerated people.

“No one is solely the worst thing they have ever done,” she said.

Video: Why are New York’s youth being locked up like adults?

Warning: Some images may be disturbing.