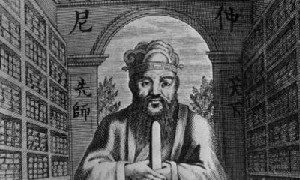 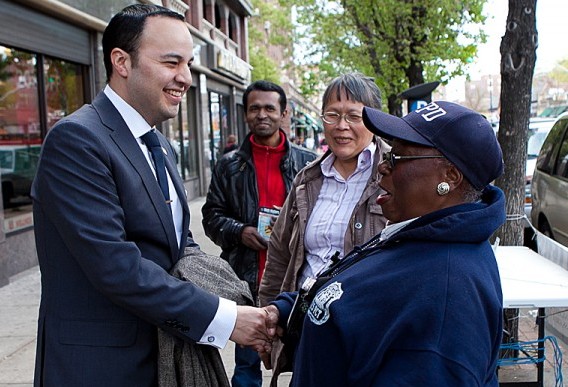 An avid soccer fan, Moya shows a photo taken of him and his brother at an FC Barcela game. (Amal Chen/The Epoch Times)
US

NEW YORK—The legislators in Albany claim they are getting things done this year, and New York state Assemblyman Francisco P. Moya may have one of the secrets why.

“We have developed this great camaraderie where we have a karaoke night. It’s just the legislators who go out afterward and they all have to sing—whoever comes,” Moya said with a smile.

He would not reveal the name of the location, joking that he would like to keep his singing voice a secret. “I sing whatever, I don’t care. I am a horrible singer, but I live up to my word. I have always had great fun with that.”

The Wednesday night tradition started in March last year with just five members (whom he would not name), who hungrily stumbled into one of the only places still open late. “We went out and it just caught fire,” he said.

“You have Republicans coming in, you have Democrats coming in, and everyone gets an opportunity to sing. We have a great time,” he said. “That is how you build that kind of camaraderie where you normally wouldn’t have that opportunity to.”

He credits the relationships that he has built with some Republican colleagues for their support of the Dream Fund legislation, which he sponsored. The bill’s purpose is to create a private scholarship fund for children of documented and undocumented immigrants.

When Moya is not in Albany singing off key, or in the chamber, he works out of his district office in Jackson Heights, Queens. His 2011 nomination made him the first Ecuadorian-American to be elected to public office in the United States, an honor which made the news in his family’s homeland as well.

“The night I won I got a call from the president of Ecuador. The ambassador [to Ecuador] called me, who is a very good friend of mine. It was the biggest news in Ecuador,” Moya said.

He was on the front page of every newspaper in Ecuador and made the rounds on the morning talk shows via Skype. “It was very, very humbling. It was very enjoyable as well to be able to bring my roots to be known in the mainstream,” Moya said. “My parents were very proud of that.”

His father, Edgar, who immigrated to the United States at age 19, is his biggest supporter. “He didn’t walk the day of his graduation because it was the day of my election. He wanted to stay with me,” Moya said of his father, who earned his master’s degree in art history at City College in 2010. “We are very close.”

His father is very involved in his work and often goes to events with his son. When Moya is in Albany, his father keeps tabs on him by watching the legislative channel. One day Moya said he received a call from his father when he didn’t see him in his seat, demanding to know where he was. “I told him: ‘You know, Pop, we do other things, we don’t just sit there like school kids!'” he recalled with a laugh.

Moya was born and raised in Corona, Queens, “in the shadows of Shea Stadium,” as he likes to say during his speeches. “I love my neighborhood,” he said. “I just love the diversity that exists here. There is this great sense of community that has not left.”

Moya was active in his community from the age of 15, starting a block association after his cousin, Pat Rosero, was mugged in broad daylight in front of her home, four doors down from him. “It got me more involved, not just in community organizing, but also on the political front,” he said.

Moya invited Congresswoman Nydia M. Velázquez to a block association gathering during her campaign. She liked the passion the young Moya showed and offered him and his brother a job in her office. He worked his way into the political scene and also worked for Congressman Brad Sherman (D-Calif.) in Washington, D.C.

He turned to the private sector working for Elmhurst Hospital and then Cablevision. His career was successful, but he felt the tug back to politics after seeing one of his predecessors, Hiram Monserrate, under investigation in his own neighborhood. “I didn’t do this because I needed a job, or I needed the money, I did it because I believe in being a public servant,” Moya said.

The return to politics now has him on the other side of the table as elected official, but he appreciates the experience that having been a staff member brings him. “It actually helped me because I know the people, and I know how the process works, so it makes it much easier of a transition for me than for most people, because most people don’t know the culture, they don’t know how things work.”

Moya loves sports almost as much as he loves his community. He bleeds Mets orange and blue and cheers for the Knicks and Jets as well. “I’m a Queens guy through and through. That is who we root for. My childhood memories are based on Shea Stadium and going to the Garden,” he said.

His father took him to almost every Mets opening day game. As kids, his friends used to take advantage of the half-day Wednesdays at St. Leo’s Catholic School to go to Mets games with $3 tickets they redeemed from Coke cans.

Moya was sad to see Shea Stadium torn down. “There is no other stadium like it. You will never be able to replicate that stadium. It is one of those things that is now lost, but you keep alive in your memories,” Moya said.

Like many life-long Mets fans, his most vivid memory involves tears. “I was there in 2000 when they were in the World Series. I could count how many times I have cried in my life, and I think that was one of them,” he said.

His passion for the Mets is shared by former Gov. David Paterson, with whom he has been good friends since 2003 when he worked for him. Patterson affectionately refers to Moya as the “Prince from Corona.” After Moya returned from a trip abroad, Patterson’s assistant asked him jokingly, “What are you, a prince?” and it has stuck with the governor ever since.

Paterson, his father Basil Paterson, and Moya attended Mets games together prior to his election to his assembly seat, “Some of the best times I ever spent with the governor was when we were watching Mets games,” Moya said.

After this year’s opening day victory by the home team against the Atlanta Braves, Paterson called Moya, “We were just as giddy as can be,” he said with a laugh.

Moya loves his Mets, but his first love is FC Barcelona, the soccer club from Spain. He has traveled overseas a dozen times just to see them play.

The FC Barcelona superfan’s iPhone is custom made with the team crest inscribed on the back and the flag on the power button. Moya beamed when he displayed the picture of himself holding the Champions trophy in the press room in May 2011 after Barcelona beat Manchester United for the European Champions League.

P is for Private

Moya is candid about sports and refreshingly honest when talking about politics but there are two questions he refused to answer. When asked what the “P” in his middle name stands for, he replied, “I can’t tell you! Only three people know that: my mother, my father, and my brother.” He says with a laugh, “It is the best kept secret in my life!” He promised to give The Epoch Times the scoop if he ever reveals it.

Moya also danced around the question of age only giving the month and day of his birth date—Jan. 9. A quick search online revealed the year, however this reporter is still holding out for the middle name scoop, and so will respect the wishes of the thirty-something Prince from Corona.