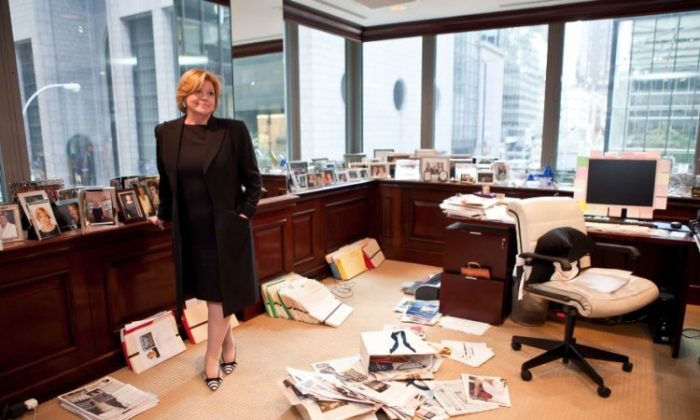 A view of the building at 69th and Broadway, which Consolo helped transform into a retail hub in 1985. (Charlotte Cuthbertson/The Epoch Times)
US

This is New York: Faith Hope Consolo, ‘Queen of Retail’

Faith Hope Consolo is a memorable name—just like the woman herself. Her name was given to her by her mother, Jill, who passed away when Faith was just 12.

“I had a very eccentric mother. She was a child psychologist and probably the smartest one,” said Consolo, adding, “[My mother] said she had faith because she almost died having me, and then when she had me, she had hope for both of us.”

Consolo commands her office on Madison Avenue and 57th Street—it’s her personal piece of real estate. “I can be who I am here. This is my space,” the self-titled “Queen of Retail” said. Consolo is the chairman of the Retail Leasing and Sales Division at Prudential Douglas Elliman.

Post-it notes surround her computer monitor like flower petals, a never-ending to-do list for a woman who prides herself on customer service.

A sea of picture frames cover a wood-grained mantle piece below the windows of her corner office that overlook Madison Avenue. “This is every hair color, every dress size—all different,” she says glancing at memories past.

The day’s newspapers, along with numerous magazines, are strewn across her floor and desk. “It is organized chaos. But it doesn’t matter. I know where everything is, and I am happy!” she exclaims with a smile.

Real estate deals or consultations in the retail world can take Consolo anywhere in the world on any given day, but there are two constants in her daily routine—a steady diet of news and her “Marine” breakfast: half a grapefruit, oatmeal, and two cups of coffee.

She keeps a close eye on the stock market, watching CNBC from a television in her office. “The stock market is very much married to the real estate market. They are both a little emotional,” she said. The continual flux of her business and schedule is what keeps her excited and still in the game for nearly 30 years.

Technology has improved during her time in real estate, and she has utilized it; but unlike a younger generation, she does not rely only on it. She has all the i-gadgets, but doesn’t use them much. She has email—which, by 4:00 p.m. this day, had 1,294 messages in the inbox—but still takes the time to write handwritten notes. “I think people like that. I have very nice stationary, I have very nice cards. I think that is a personal touch. I think you have to touch people in a different way,” she said. Her personal touch tagline is a smart play of words on her name: “You need Faith.”

She considers the telephone her biggest advantage. “I pick up the phone and I talk, or I go see someone. I can hear in their voice they want to do business,” she said.

Very early in her career—while working for Garrick-Aug, the largest retail leasing firm in the country—Consolo was prospecting to bring new businesses to New York.

“In those days, I just called the chairman of every company. You didn’t email people,” she said. “All the chairmen were men, so they all took my calls,” she added with a laugh.

There were no computers to do research on, and without many contacts, she pulled from her life experiences. She noticed a lack of chocolate stores like the ones she had visited while studying in Europe during college. She recalled one small shop on Fifth Avenue—Godiva—and made a call.

She convinced the president of Godiva, Al Pechenik, to meet with her in two days at his office. As she sat back in her office to confirm the address, she stopped, suddenly realizing the address was in Pennsylvania—three hours away.

Unwilling to cancel, she and her associate drove to the Godiva headquarters. After a tour of the factory, Consolo sat down with Pechenik and found out he was a French chef prior to working there. They hit it off, discussing food, Paris, and school—all in French.

He agreed to meet her in New York two days later, where he signed an exclusive deal. She has since made 48 deals with him. “There are brokers in their career that don’t make 48 deals.” She did with one client.

Consolo was born in Shaker Heights, Ohio, and grew up in Connecticut, but sounds every bit a born and raised New Yorker. “New York is my home. I have left here three or four times—to get married, to get divorced, to study abroad. Love got lost and I moved back,” she said.

She has been back in New York for 25 years, and currently calls upper Fifth Avenue home. She distinctly remembers early in her career when New York was a crime-ridden city with little tourism. “In the 80s, I worked in neighborhoods and sometimes it was hard to sell those neighborhoods.”

Consolo recalled a 25,000-square-foot space she transformed in 1985 on 69th and Broadway that was a Beefsteak Charlie’s before it closed. No one could see what she saw in that space, but she stood out front in the freezing cold, every morning, knowing if she could get one good tenant, others would follow.

To keep away the vagrants, she brought a stack of $1 bills, paying them to move away from the store front.

“I became like the mayor. I had them all organized,” Consolo said, recalling how she would move them from in front of her space to the coffee shop across the street and then to the post office nearby to keep her space clear.

She chose to divide the space into smaller stores and it worked. “One by one, we would lease beautiful stores,” she said. “In fact, the first Ann Taylor went there and it is still there. We transformed it for what the vision was. Nobody wanted to go there. Once we put everyone together, it became a very vital neighborhood.”

A few years later, in 1987, Consolo used the same formula to transform the Flatiron District. At the time it had no retail, so she brought in London designer Paul Smith. “He got a great corner in a neighborhood that had not yet arrived,” she said. Georgio Armani and Zara soon followed. Consolo called Smith a pioneer, something she also sees in herself, “People don’t always like to be pioneers because they are afraid of change. I am not afraid of any change,” she said emphatically.

In 1992, just 7 years after transforming 69th and Broadway, Consolo was asked by the city, and then-mayor David Dinkins, to help transform Times Square, which had mostly pornography theaters, and no retail.

She stuck with the formula that had worked so well for her in the past and selected one big company to entice others to follow. That company happened to be Disney, a deal which has transformed Times Square into an iconic destination for tourists from around the world.

“Making a deal is a hit, it’s not a career,” she said, adding that effecting change to the “environment and fabric of life in that neighborhood” is more important than the deal. “I take it very seriously.”

She explains her evening ritual, “At 5:00 or 5:30 p.m., [the staff] all start to push me and we all listen to the …” She pushes the power button on her stereo and suddenly the chorus to Bryan Adams’ “Summer of ’69” fills the room.

A child-like smile spreads broadly across her face, “I stop screaming and I start laughing,” she yells over the music. “And when we make a deal, I start dancing!”

In addition to dancing after making a deal, Consolo rings a bell to let the office know a deal went through, a tradition she picked up in 1989 while at Garrick-Aug.

She has rung that bell many times in her career and doesn’t plan on stopping any time soon. “It’s the longest career I have had. I am not tired, I am not retiring,” she said. “You’ll drag me out of this business—Jimmy Choos first!”