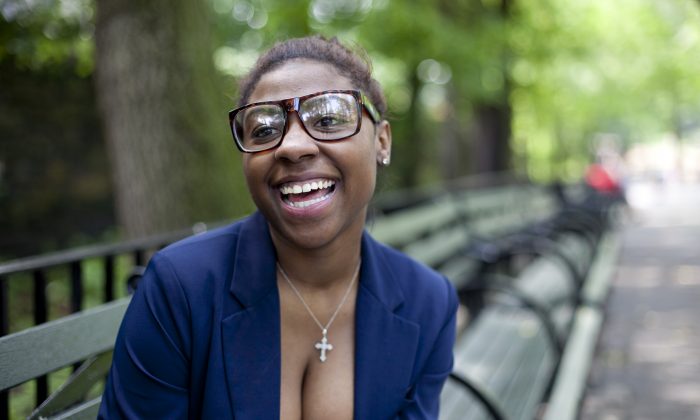 Damila Howard sits at Dyckman Park in Washington Heights on May 29. Howard was one of 20 individuals who recently won an “Inspirational African-American Leaders of New York” award. (Samira Bouaou/The Epoch Times)
New York

This is New York: Damila Howard, Learning Self-Respect at a Young Age

NEW YORK—The doorbell rang. Her mother was trembling, unconscious on the ground next to her. Damila Howard, who was 5 years old at the time, had been unsure whether the person behind the door was an ill-boding stranger or the paramedics. She recalled pulling a stool toward the door to peek through the peephole.

Living with a single mother with epilepsy, Howard had to grow up fast. Naive childhood innocence was lost at an early age; on many occasions she left the house wondering if her mother would still be there when she returned.

Yet Howard, at age 22, smiles with a particular ease and heartiness that makes one think she had grown up in a milieu that was free of trauma and sorrow.

She speaks with effervescent energy as she talks confidently and with hope about her plans for a career in public relations after she graduates from CUNY. She was like a breath of fresh air.

But her merry ambiance came from a profound reconciliation with painful events, rather than youthful innocence.

“I don’t want to say it was hard growing up. But it was definitely a challenge,” she said.

When Howard was 10, her mother had to resign from her career as the director of a drug rehabilitation center for women. She could no longer drive as her condition worsened. She was formally declared disabled.

Howard’s grandparents helped raise her, but she still took on many key roles in her mother’s care.

From the sixth grade through high school, Howard spent much of her adolescence researching doctors and taking her mother to various hospitals across Manhattan.

“So many people settle for one doctor, but I took my mother to literally every hospital in New York City until I found one that I felt gave me enough information,” she said.

Howard spent time taking care of her mother as other children were going to sleepovers and joining in on neighborhood games.

“I could be an angry or bitter person because it’s like a part of my childhood was taken away,” she said. “But I had to remember that my mother never asked to be sick. It’s not how she planned her life to be.”

“I should be happy I don’t have the sickness,” she said. “Things are harder for her than it ever would be for me. If she can still be happy, then I’d be crazy not to be.”

Despite her illness, Howard said her mother couldn’t have been a better teacher of life.

Howard’s mother taught her to value self-respect as a woman.

“As I got older, I watched other girls who don’t hold themselves to that standard, and I see what she meant,” Howard said. “It’s the way you carry yourself, and it makes a difference.”

Howard’s father was not there for her during her childhood, but her mother always told her to forgive and to carry herself with dignity.

“My father has moved on. He has his own family,” Howard said. “But my mother never bashed my father.”

“She could have,” she added. Yet her mother would always remind Howard to call her father on his birthday and Father’s Day.

“She told me sometimes you have to be the bigger person and just do the right thing,” Howard said. “Do what you know is right. If it wasn’t for him I wouldn’t be here, and she said she’s thankful for that so she’ll tell me to tell him happy birthday.”

Although her parents have parted ways,  Howard still has a positive view on marriage.

“Just because it didn’t work out [for my mother], it doesn’t mean it would always be like that,” she said.

On an October afternoon three years ago, Howard had been outside in Washington Heights with a group of friends when one of them was gunned down in front of her.

“Things like that can happen, it’s crazy. You see it on the news, but when you see it in person …” she trailed off. “This is really how life is sometimes.”

It was a difficult time for Howard; her grandfather also passed away from natural causes a few days later. But she doesn’t look back on those moments with anger or resentment.

“Those two things really woke me up,” she said. “Take any opportunity you can get because life is very short and I’ve learned that at a young age.”

She decided to put more effort into pursuing a career in public relations, which has been a lifelong dream.

Howard grew up in Harlem and continues to give back to the community, although she currently lives in Washington Heights. She has organized cookouts, ball games, concerts, and other events in Harlem.

Earlier this month, Howard was one of 20 individuals who won an “Inspirational African-American Leaders of New York” award, which recognizes New Yorkers who are uplifting their communities.

Howard is currently working on helping a friend put together a charity banquet to raise awareness and support for epilepsy and autism.

“I think the Epilepsy Foundation doesn’t get as much exposure as they should. … But there are a lot of people who suffer from [epilepsy],” she said.

“I’ve always wanted to help people, but I didn’t want to be a doctor or a nurse—PR is my way of helping people.”