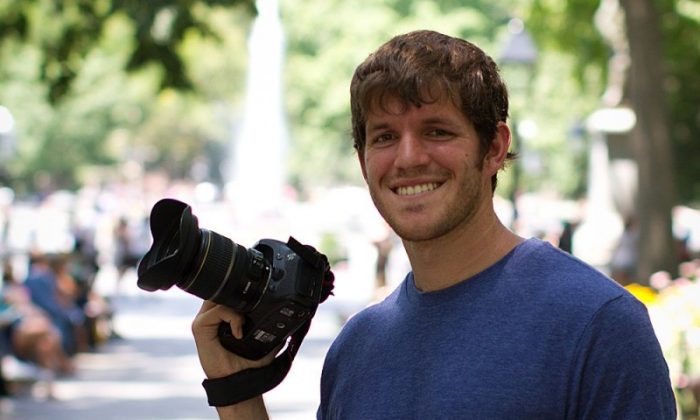 “This photo was taken around midnight on a Brooklyn-bound C Train. The son was sprawled out on the father’s lap, sleeping. The father was cradling the boy’s head in his hands. It was a pretty touching scene and I wanted to photograph it, but I was very tired myself and I wasn’t sure how much I’d be able to capture from such a close distance. Then suddenly, the father lifted his son into a sitting position, and leaned in so they were touching faces. I quickly pulled my camera from its case and snapped a shot. One of the most natural, beautiful moments I’ve ever been able to capture.” (Courtesy of Brandon Stanton/Humans of New York)
US

NEW YORK—New York City boasts eclectic scenes of human activity and interaction on a daily basis—whether it’s an elderly couple helping each other down the stairs, a debonair man clad in a red and green checkered suit with a chain wallet, or a girl in a blue dress spinning a hula hoop as she draws a bow across her violin. Photographer Brandon Stanton’s project, Humans of New York, has attracted a massive following through capturing on camera those “only in New York” moments and sharing them online.

Stanton’s goal with Humans of New York (HONY) when it began in 2010 was to create an “exhaustive catalogue of the city’s inhabitants” by photographing and mapping 10,000 New Yorkers. He’s at about 3,700.

As Stanton inched toward his goal, his work took on a deeper tone. The interaction he has with his subject often ends up as part of the story that accompanies the image. More than a caption, it provides a peek into the moment strangers meet and share an exchange.

Choosing subjects is random and arbitrary. “I want to make it as difficult to find a thread in my photos … I do that by keeping a completely open mind and just looking at everybody and anybody who strikes me for any reason, you know that kind of makes me double-take,” Stanton said. “Normally it’s when I was trying to take a certain picture, and something completely unexpected happened that the picture turned out to be 10 times better than I thought it was going to be.”

He recalled one of his favorite images: A really tough-looking African-American man was walking the streets with a boom box and a sign that read, “I make beats.” Stanton stopped to take his photo, and as the man stared at the camera sporting a cool look with attitude, an eccentric white guy came up behind him and, with a goofy look on his face, pumped the rock and roll sign in the air.

“Nine out of 10 photographers say, ‘Excuse me, sir, can you please get out of my shot?’ but, I just start snapping. It’s one of the best photos I’ve ever taken,” Stanton said with a laugh.

“In addition to what I like to think is art … you are really giving these people something by taking their photo. Hopefully it is always positive, but you are really creating an event in their life.”

His photos are full of life. His success lies in his approach, both with his subject and his fans. Stanton asks his subjects for permission to take their photo, a process born from the pursuit of the best photo.

“It’s all about unspoken energy. It’s all about how nervous you are,” he said. “If I can get them looking into the camera, it creates a much more powerful effect.”

“It took me about eight months to get my first 1,000 Facebook fans. Now we’re putting on 1,000 a day,” Stanton said. “It wasn’t a victorious march to victory, or an unimpeded march to victory at all. It was a lot of work before anyone really cared.”

Stanton’s attraction to the Internet began early; while growing up in football-crazy Marietta, Ga.

As sixth-graders in 1996, Stanton and his friends started designing Web pages. Their biggest claim to fame was one of the earliest South Park fan pages, Ultimate South Park. The site was listed on Yahoo—a big deal prior to the days of Google—and getting 1,000 hits a day.

He was also a dabbler. He asked his mother to invest in something, such as music lessons, which would completely him for a few weeks or months before getting bored and moving on to something else.

“I just think I was young and I hadn’t tried enough stuff to know what I really liked,” Stanton said, acknowledging he still has the penchant today and finds it beneficial. “I think it’s good the older you get, because it forces you to evolve yourself.”

It wasn’t until he was at the University of Georgia that he started to use a camera, but it was a video camera. Stanton decided to be a documentary filmmaker and chose to make a film on student athletes.

For his subjects, he chose then-freshman running back Knowshon Moreno (now of the Denver Broncos), 14-year-old golf phenom Alina Lee, and Tom Hardaway, a 70-plus librarian who could shoot hook-shot 3-pointers with such accuracy that NBA players might blush.

“I’ve got him on film making 18 three-pointers like this,” Stanton said, mimicking Hardaway’s shot. “I think his record was 71 in a row.”

Stanton’s filming skills were not as amazing as Hardaway’s hook shot. Over a year he gathered 100 hours of what he called “the worst footage you could possibly imagine.” To make matters worse, his microphone failed to work for 80 of those hours.

It didn’t take much to draw his attention away from the botched documentary efforts.

As he was trying to salvage the film, a little-known state senator from Illinois named Barack Obama started making some noise about a presidential bid. This immediately piqued Stanton’s interest and his focus shifted.

He threw all his energy into learning about Obama and campaigning for him. Confident Obama would win the democratic nomination over Hillary Clinton, Stanton took out $3,000 in student loans and placed a bet on Obama winning. He won, and Stanton cashed in.

His win caught the eye of a friend who traded bonds in Chicago and offered to get him a job interview.

With the documentary on hold and the campaigning over, Stanton thought bond trading could be exciting. He once again shifted his focus, spending three months poring over trading books and market patterns to prepare for the interview. He nailed it.

Bond trading became his new obsession. He excelled at it by taking calculated, rule-bending risks that paid off.

After pushing the envelope for almost two years, Stanton’s luck in the trading world ran out. “Eventually I broke one too many rules and lost a ton of money one night,” he said. “They let me go.”

It was about that time coach Rex Ryan pushed the Jets to a resounding win and changed the course of Stanton’s life. He owes it to Ryan for even owning a camera—not that Ryan knows that. “If it wasn’t for Rex Ryan running up the score against the Cincinnati Bengals three years ago, I wouldn’t even be here,” he said. In the fall of 2009, near the end of his trading career in Chicago, Stanton won a football pool after betting on a 37-point win. The Jets beat the Bengals 37–0. “So Rex Ryan won me this camera right here. I would still love to photograph Rex Ryan and tell him that story. I will one day.”

Stanton has been running HONY full-time since November of 2010 and admits to getting slightly bored with it. But unlike in his youth where his wanderlust would draw him to a new project, he has matured and looks forward to the next evolution.

“I think it’s healthy to get bored with your own work,” he said. “Then you take it to a level where it’s got your attention again, and it will probably refresh the attention of your audience also.”

In June, Stanton wrapped up the first print sale of a selection of HONY pictures, selling them for $30 each and personally signing each one. The sale was highly successful, giving Stanton financial breathing room he has not known during his time in New York.

Stanton aims to put the money back into the project: specifically by bringing the website up to par with his social media sites. He also wants to get back to writing and plotting the photos on the map—the original reason he started the project, but something that fell by the wayside.

No matter what the future holds, Stanton knows there is one path to success: “What makes my work grow is not spending money … It’s walking the streets, spending a lot of time out there and finding interesting content.”