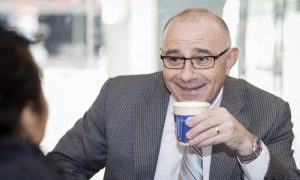 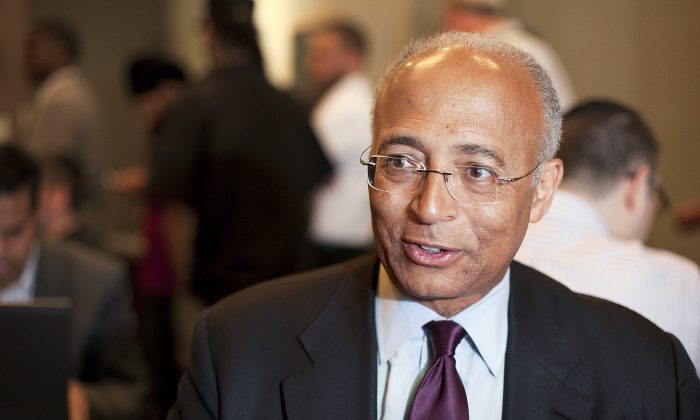 This is New York: Bill Thompson on Movies, Family, and Mayors

Capitalizing on this, he squeezed in a movie with his wife.

“It’s not exactly a great movie … honestly, it wasn’t a great movie,” Thompson said of “White House Down,” chuckling. “But it was fun to just sit there and not have to do anything.”

“I used to have spare time,” he mused. “I used to play golf up until this year. I always enjoyed reading; I don’t get to do that anymore. Now it’s just always newspapers and briefings.”

Thompson, 60, gives an insight into the race for New York City’s top political office. He carries himself with a gentle and calm demeanor, but has a hefty resumé behind him.

He served as NYC comptroller from 2002 to 2009; and he was president of the NYC Board of Education from 1996 to 2001. His mayoral campaign against Bloomberg in 2009 was tight with Bloomberg winning a third term by edging out Thompson by 4.6 percent.

Lessons and Inspirations
Thompson grew up in Bedford-Stuyvesant, in a three-generation household.

“It was a good childhood. I grew up in a house with my grandparents on the bottom two floors. Grandmother was a great cook; she would cook a lot,” he said.

“It’s because of my grandparents and my parents that I am the person that I am today,” Thompson said. “The one thing that was impressed upon me from an early age was to do my best with whatever I was doing.”

As a child, Thompson occasionally brought home a grade that was mediocre—he admitted this after a playful hesitance.

“Whenever that happened, I used to always point out that [at least] I did better than someone else,” he recalled. “But my father never wanted to hear that.”

“I was told to always try to do the best I can,” he said. “That I remember vividly.”

As a child, he and a friend were once asked to build a small frame that outlined a cabinet shelf. He and his friend finished the project quickly so they could go play.

“I remember specifically having to do it again,” Thompson said. “I remember my father saying, ‘Look at this, you didn’t do all that you could have.’ And as he pointed out, it would have been easier to just do it right the first time.”

“It wasn’t anything big, but it was still something that should have been done well,” he said. “I always have looked up to my dad.”

Thompson’s mother was a public school teacher. His father, William Thompson Sr., was the first African-American to serve as state senator in New York. He was also a judge in the New York Supreme Court and, at 88 years old, still works five days a week.

But it wasn’t easy getting there.

“My father grew up in a very different time. He was a World War II veteran who served in a segregated army,” Thompson said. “He grew up during a time when it would be easy to be more bitter. But I never saw any of that.”

Thompson said one of the most profound lessons he learned from his father was to always remain positive, regardless of the situation.

“He never dwelt on the negatives and he would encourage you to do the same thing,” he said. “Those are the things that always inspired me.”

Thompson’s positivity was tested in 2008 when his mother passed away.

“One moment she was in great shape … we were all at a dinner, and then the next day she had a stroke,” he said. His mother was in a coma for a couple of months.

“It was one of the most painful things,” he said. “I was at the hospital a couple of times every day.”

“When someone who had been a role model, and you watch them deteriorate, it’s painful.”

Thompson said he tried to be positive about things.

“I dealt with it. I tried to be strong for my sister, my niece, nephew, and my daughter. We are all very close,” he said.

Thompson recalled going to Newark as a teenager to help David Dinkins become the first and, so far, only African-American mayor in New York City. In his youth, Thompson met former New York Sen. Robert F. Kennedy, who had worked closely with his father.

Thompson had many opportunities to tell extravagant tales about his life, himself, and his accomplishments, but he did not rush to take them.

When asked what makes him the best fit for mayor, Thompson spoke confidently about his experience, without disparaging the other candidates.

Due to a last-minute change to the city’s charter revision law, Thompson had the chance to run for a third term as comptroller in 2009.

“But I wouldn’t have run again for comptroller even if I hadn’t been running for mayor in 2009,” he said. “To do anything more than two terms is wrong.”