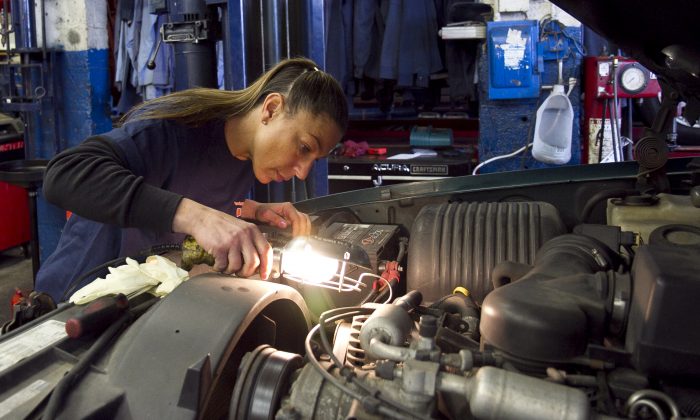 NEW YORK—Audra Fordin’s fingernails were painted light pink, her eyebrows freshly plucked. Her hair was sleek and dyed. Yet Fordin was not afraid to reveal she was 40 or conduct an interview in the rain outside of the Great Bear Auto Body Shop. In fact, she is an expert mechanic and owner of the car repair shop.

“This shop is my house. The parking lot is my living room. This is all that I know,” she said. The Great Bear Auto Shop has been a Fordin-run family business for four generations. “[Growing up] if I wanted to be included in the dinner conversation then I had to speak car,” she said.

As a child, Fordin hung around the store answering phone calls, dealing with account receivables, and writing estimates. “I started filing when I was learning the alphabet,” she said. “During my entire growing up there was never a Saturday.”

After graduating with a business marketing and management degree from Arizona State, Fordin decided to return to Flushing, Queens, to work at her father’s repair shop.

“I had options, but this is the path I chose. This is what felt good,” she said. In 2007, she took over the family business.

“There was never anything else for me,” she said.

But when the recession hit a year later, Fordin’s auto shop suffered as the usual clients began riding buses to save gas money. At a time when money was scarce, Fordin decided that in order to save the business, she had to be selfless.

“People were saying that what we do different is education and communication. We explain things and give confidence,” she said. Fordin felt that the solution to her faltering company lay in gaining trust.

“This is a service business, it’s about building relationships,” she said. “It’s the foundation that my family has been living on.”

Shortly after the recession, Fordin founded Women Auto Know, a free workshop that educates women on how to maintain cars and recognize signs that a mechanic is cheating them. “It was to give them a backbone because they were saying that they needed it,” she said.

The Women-Auto-Know website provides an outlet for women nationwide to review auto shop experiences. “I believe that through transparency we will earn trust back into the industry,” she said.

The free workshops were inspired by a female customer of Fordin’s who had been taken advantage of by a number of repair shops. She came in one day with an overheated car that had mixed fluids.

“She didn’t know what was going on, what was happening, and as I was explaining it to her, getting her out of this big mess, I saw a light bulb go off in her head,” Fordin recalled. “And it was so empowering to me, it’s fueling for me to see that.”

“She brought her friends, and it turned into a snowball effect,” she said.

Fordin used the donations she received from the workshops to repair cars for free for single mothers. The story of one particular, unsuspecting, woman, who became a single mother overnight, and the driving force for free car repairs.

“I got goose bumps just thinking about it,” she said.

There was an older woman who had been going to her shop for years. She was a nurse approaching retirement, and her husband could not work for some time because he was recovering from a heart attack.

Her son was a drug addict who had moved away. Yet one day, her son’s ex-wife came by to bring her three small children to look for him. Upon realizing that he was not there, the ex-wife left the children with the grandparents and never returned.

“The worst part is, then her husband left her after 50 years because he didn’t want to take care of grandchildren,” Fordin said. “I couldn’t take this woman’s money. I told her to go buy books and food.”

In 2011, Mayor Bloomberg presented Fordin’s business with the Small Business of the Year Award.

To date, more than 1,300 people have participated in Fordin’s free workshops. She hopes to embrace new technology by hosting a charging station for hybrid and electric cars, and is currently developing a program to encourage young women in foster care who are aging out of the system to consider a career in auto repair.

“It’s the stereotype of this male-dominated field. But it doesn’t have to be,” Fordin said. “What was just saving my family business turned out to be my passion, my movement.”

Fordin is also a mother of three young children—ages 5, 10, and 12. But she finds time to do everything that needs to be done.

“When you really love something it just works out. It just happens,” she said. “People say they can’t get to the gym because they don’t have time. But if you really wanted to go, you’d fit it in.”

She recently bought the house across the street from her house for her parents to live in. “When they look outside their window they can see their grandchildren playing,” she said. “I can know that my parents ate, that they’re home.”

But there were issues with the contract, and now the house is unfinished even though her parents already made plans to move in.

On top of that, there was an electrical fire in her house last week. The fire alarm went off at 3:45 a.m. The family experienced difficulty getting out because the whole house was clouded with smoke.

“We got out of the house. It was cold … all of us are in tank tops. I had nothing. I couldn’t even call 911 myself,” she said. “I just grabbed my kids and went outside.”

The fire destroyed the house to such an extent that they cannot move back in for some time.

“Fire trucks were around me, my house was burning. …We were all standing there wet and cold but I was smiling. It was crazy,” she said. “I needed nothing but my people, my love.”

“It’s such a powerful feeling to be possession-less,” she said. “I had nothing but the core of my soul. I had never had a feeling like that in my life.”

“I feel like I can transform that negative energy into something good. That’s what I do, I share that, to make a difference,” she said. “I do it because I can.”