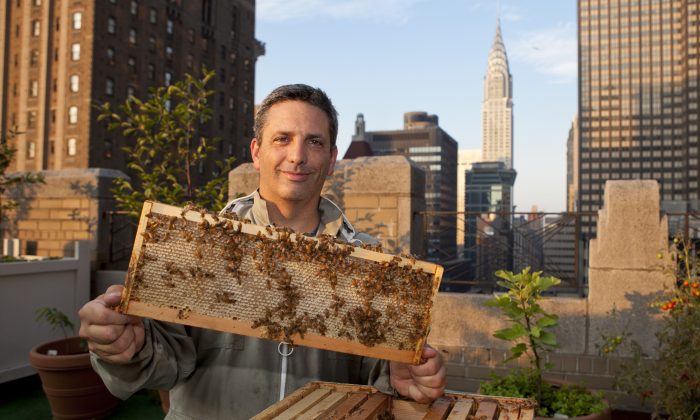 From Jiu-Jitsu to Urban Beekeeping, A Busy Life
By Amelia Pang

NEW YORK—Andrew Coté is the founder of the New York City Beekeepers Association, but that’s not the most curious thing about him.

His appearance suggests he’s a normal, white male, who sells his Andrew’s Honey brand at a stall on Mondays and Wednesdays at the Union Square Greenmarket. But every so often, he breaks out a martial arts move and takes someone down, showing a very different side.

Opportunities arise for Coté to brush up on his jiu-jitsu and aikido skills every now and then—especially in New York City. His five years spent living in a Japanese Buddhist temple and training with a master were not for naught.

Earlier this month, Coté noticed a man in Union Square spitting in the face of a female passerby who had ignored the man’s advances. “I saw that and I thought to myself, that’s an assault,” Coté said.

So Coté walked over and, in a series of swift movements, quickly brought the man to the ground.

“No, I didn’t get in trouble for that,” Coté said. “He assaulted someone, all I did was restrain him.”

So who is this jiu-jitsu disciple turned urban beekeeper? Let’s just say, the above only scratches the surface of his eccentric qualities.

Coté has also taught ballroom dancing to elderly ladies at an Arthur Murray Dance Studio. He learned to dance from his aikido master’s wife, who was a ballroom dance instructor.

Coté is a man who has accomplished more than most, yet he also tends to leave some things unfinished—like his doctorate in Middle Eastern studies at Yale. He preferred to spend time with his beekeeper father and bees rather than sitting in a library in New Haven.

He attended five different colleges for his undergrad—he was kicked out of two—before finally graduating from Long Island University in 1997, from its Kyoto campus in Japan.

He also dropped out of high school at age 15. But Coté wasn’t a bad, or troubled student. He simply wanted to make better use of his time.

“I don’t think I was too smart [for school]. I just know that we were wasting a lot of time daily,” he said. “I was always highly cognizant of time being the most valuable asset that I have.”

“I’d rather have someone steal my money than take my time,” he said.

Living in a Buddhist Temple in Japan

Coté’s father began taking him to martial arts classes at age 10. “I wanted to learn how to defend myself because I had some trouble with kids at school,” he recalled.

At age 23, he decided to go to Japan to learn martial arts in-depth from a master. The previous year he was teaching at a high school in Ecuador.

When his Japanese tourist visa ran out, he obtained a student visa and studied Japanese literature at a nearby university.

“It seemed appropriate. I needed to study something,” he said.

It was a double life. By day he studied Japanese literature. And in the early mornings, late afternoons, and evenings he would return to the Buddhist temple to train in aikido and jiu-jitsu.

He trained eight hours a day, six days a week, for five years. And those were the happiest days of his life.

In Japan, he learned much more than martial arts.

“My teacher in Japan was like a father to me,” he recalled. “He taught me moral rectitude.”

His teacher was not rich, but he spent much of his resources building up two dojos—formal Japanese martial arts training places—in Cuba.

A member of their dojo was Cuban and they traveled as a group to Cuba several times, bringing food, money, and resources to help build the dojos.

Coté had studied Spanish at several of his five undergraduate universities, and it came in handy. During these trips, he served as an interpreter between Japanese and Spanish.

Such were the events that shaped the humanitarian values, upon which he later founded his two nonprofits.

But it was the bees that drew him back. As a fourth generation beekeeper, Coté has extensive knowledge of the ins and outs of beekeeping.

In 2005, he founded Bees Without Borders—a charity that brings resources and education to beekeepers in underdeveloped countries, in hopes of using beekeeping to help alleviate poverty.

He travels to an impoverished area each year to help local beekeepers make the most of their resources, to places ranging from Brooklyn to Baghdad.

So far, he has been to Niger Delta, forgotten Fijian islands, Ecuadorian jungles, Haiti, Kenya’s Samburuland, and southern India.

He has helped beekeepers in Kenya build fences to fend off honey badgers, which are seemingly cute animals that are the bane of a beekeeper’s existence. He has set up beehives in community gardens in Brownsville and East New York. He has sweated out 114 F heat in Iraq to teach farmers better pollination techniques.

“It’s humbling to be around such poverty, grace, and stoic people,” he said. “You see people who walk six miles to get water—to make sure that their bees have water and that their families have water.”

Many beekeepers in these countries are unaware that they can use bees for more than their honey. Coté teaches them how to tap into their potential for other bee resources such as wax and pollen.

He also teaches beekeepers alternative ways of extracting honey that does not include burning out a colony to get honey. The traditional way of beekeeping often requires killing the bees, and at a time when bees are disappearing from the planet, each hive is a precious life source.

The organization has also raised money to buy protection gear for many beekeepers, who had been enduring the stings of the job due to a lack of resources.

Throughout his life, Coté always found bees, no matter which part of the world he was in.

Coté retired early as a literature professor for the state of Connecticut, only to do more work after retirement.

“But I’m the only one in New York City who is a full-time beekeeper,” he said. “Everyone else does this part-time, or as a hobby.”

“Maybe everyone else is smart enough to do something else,” he joked.

It’s not an easy life.

Coté wakes up at 5 a.m. on average, sometimes earlier.

Last Saturday morning, he woke up at 4 a.m. to drive from his Lower East Side apartment to East New York, where he picked up a hive from a beekeeper who no longer had the resources to care for it.

He then drove from East New York to Chelsea, just in time for his weekly 7 a.m. meeting with his beekeeping apprentices.

Coté looks after 48 beehives throughout New York City—in the Bronx, Brooklyn, Queens, and Manhattan, as well as Long Island and Connecticut.

Coté founded the New York Beekeeping Association (NYCBA) in 2008. He played an instrumental part in the legalization of New York City beekeeping in 2010, which had been illegal in New York City since 1999.

NYCBA is a nonprofit that aims to create a medium for sharing beekeeping knowledge. Beekeeping was illegal in New York City due to the havoc that inexperienced urban beekeepers had previously wreaked.

So why the rise in urban beekeeping? Some join because urban areas have not experienced colony collapse disorder (CCD). Others take up beekeeping to connect to nature in a meaningful way that requires less responsibility than daily dog walks, according to Coté.

CCD is a phenomenon where large numbers of bees around the world are disappearing from their hives. It has been occurring on a large scale since the early 2000s, according to the BBC documentary “Who Killed the Honey Bee?”

There are many theories that try to explain why bees are disappearing, and perhaps the most widely accepted one is that bees are unable to stand the combination of various pesticides in agricultural areas.

Bees are facing extinction—and if they do become extinct—it represents the end of the line for the pollination for many crops.

Although New York City may have a lot of other harmful chemicals, the environment has significantly fewer pesticides floating in the air.

Since beekeeping became legal, Coté has been working to educate individuals and businesses in the city that want to begin maintaining a beehive.

He looks after hives on the rooftops of unexpected places—such as Brooks Brothers and the Waldorf Astoria on Park Avenue.

“My office is on the rooftop of different buildings in New York City,” Coté said.

Coté has two master’s degrees, one in teaching ESL and one in Spanish. He had also been a Fulbright professor.

The Fulbright Program is a highly competitive, merit-based grant for international exchange students and professors.

It is one of the most prestigious award programs; Forty-three Fulbright alumni have won Nobel Prizes. His Fulbright grant got him to teach in Moldova and Eastern Europe.

Yet despite his vast array of knowledge and experience, he remains humble.

“I’ve been to over 100 countries but I don’t think that gives me a special window into anything at all,” he said. “It just means that I did the same things [as others but] with a different backdrop.”