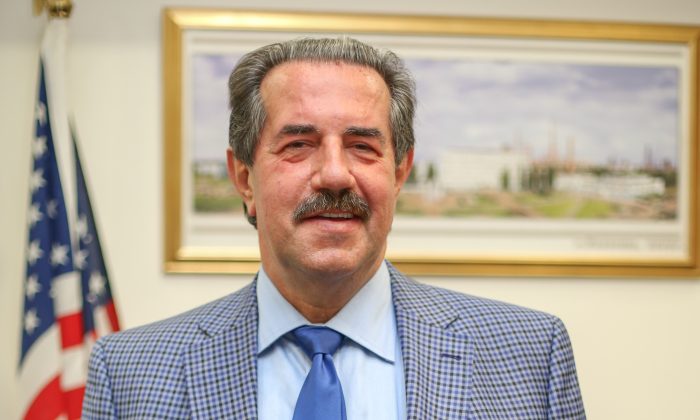 This Is New York: Alex Rovt, a Billionaire Who Listens to His Mother

NEW YORK— Alex Rovt, the president of fertilizer company IBE Trade Corporation, is a towering man with a thick mustache and a net worth of $1.1 billion. His New York office is decorated with photographs of himself with important figures such as Andrew Cuomo, and an autographed photo of Barack and Michelle Obama.

On the side of the room nearest his desk hang photos of his family, along with a photo of the Grand Rabbi Moshe Leib Rabinovich, the rabbi of Hungarian Hasidic Jews.

Rovt, 61, is a self-made man—a Ukrainian-American businessman and real estate investor who made it to the top in the former Soviet Union through the trade and manufacture of fertilizer.

For each of Rovt’s decisions, no matter how big or small or strange, family has been the basis for each choice.

To Rovt, one of the most important actions one can take to protect one’s family and honor is not to be in debt. Hence, Rovt pays all his mortgages up front—in cash—regardless of the amount. In 2012 he paid $303 million for a majority stake in a 1 million-square foot office building on Wall Street, in cash.

“I don’t do things like everybody else,” he explained in a heavy eastern European accent. “Even if it is more difficult, I do what I think is right. If you have debt, then it’s like having something over your head that can club you,” he said.

Even though he has the money to risk, he has never played the stock exchange. “I don’t want to be the richest man in the world,” he said. “You can’t eat with two spoons.”

One of the most influential figures in his life is a little old woman, an Auschwitz survivor: his mother. Although she never went to college, it is from her that this billionaire developed a visceral understanding and sense for money.

He recalled how recently, as they drove past the Brooklyn–Battery Tunnel to take his mother to her open heart surgery, she pointed to a house and said vehemently, “Listen, Alex, this is a beautiful house, you should buy it.”

“It was a nice house,” he admitted. “I really learned from my parents how strong you have to be if you want to achieve something.”

His father immigrated to the United States at age 55, his mother at 52. His mother went straight to work in a nursing home, and his father at a Kosher deli in Borough Park, Brooklyn. During the winter, he would bake barbeque chicken in a sweltering kitchen, and go out back into the freezing cold where they kept the poultry meat.

Rovt’s family is from a town called Mukachevo in the Carpathian region. The area was annexed by the Soviet Union in 1945. The town has been a part of five different countries in the course of 80 years. Before World War I, the region belonged to Austria-Hungary. After the Warsaw Treaty in 1920, the region became a part of Czechoslovakia. After the Munich Treaty in 1938, the area became part of Hungary. It went on to become the Soviet Union; after the Soviet disintegration it became Ukraine.

That’s why Rovt speaks Hungarian, Czech, Russian, Ukrainian, English, and can understand German— although he knows German because it’s similar to Yiddish.

Members from both sides of his family were taken to concentration camps during the Holocaust. Out of six siblings, his father and one uncle were the only ones who survived on the paternal side of the family.

Out of the nine children that his maternal grandfather had, seven survived. His mother is the only one who is still alive today. She still has an Auschwitz serial number tattooed on her arm.

The Shift to Capitalism

Although Rovt was a smart boy, he was also a rowdy one who often got into fights. “I was aggressive,” he recalled. “My mother needed to come to the school a lot.”

In the Soviet Union, his father was a manager of a knitting factory; his paternal grandfather sold fur. From an early age, Rovt developed an inclination toward trade.

Alex Rovt, president of IBE Trade Corp., at his Manhattan office in New York on June 6, 2014. Rovt is listed by Forbes magazine as the 452nd richest person living in the United States. (Benjamin Chasteen/Epoch Times)

Alex Rovt, president of IBE Trade Corp., at his Manhattan office in New York on June 6, 2014. Rovt is listed by Forbes magazine as the 452nd richest person living in the United States. (Benjamin Chasteen/Epoch Times)

He went to the Lviv State University of Trade and Economics in Ukraine at age 17. There, he met his wife, who studied economics. His worldview changed during this period.

“That’s when I decided that capitalism was my future,” he said. “In a communist state, you could get six to eight years in jail for doing business.” Rovt graduated with a degree in business and later received a doctorate in international economics from the same university.

His parents were never members of the communist party, and immigrated to the United States the first chance they got in 1978.

Rovt immigrated to Hungary, where he worked as a director at a state-owned fruit and vegetable supply company.

“I was 26 years old, and I wanted to do something different,” he recalled. But his capitalistic ideas got him arrested.

In 1985, he fled to the United States with his wife and son and settled in Brooklyn. “I visited the U.S. in the 1970s and understood that this is the free world,” he said.

At first, his wife did not want to move so far from home. “She said, ‘Let’s move for five years, and see what happens,'” he recalled. “In my strong belief, anybody who lives here for five years will not go back to a former communist country.”

Sure enough, his family has stayed. They had their second son in the United States in 1987.

Today, his sons often joke that he should stay home more often.

Rovt is still keeping busy. In the middle of running a billion dollar business, he also serves as the vice chairman of the board of the Brookdale University Hospital and Medical Center, the oldest member on the NYC Board of Corrections, a trustee of the John Jay College of Criminal Justice, and a board member for Touro College.

“If you properly raise your children, it gives you a feeling that you are welcomed at home,” he said. “It’s a good feeling. A person can be happy if they can achieve this.”