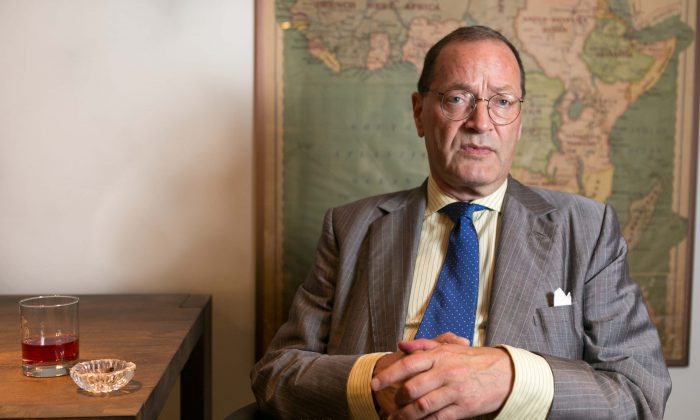 Agostino von Hassell, a military historian and president of The Repton Group, at his office in Manhattan on Sept. 4. (Benjamin Chasteen/Epoch Times)
New York

NEW YORK—Agostino von Hassell grew up listening to the chatter of old Prussian nobility, friends of his grandfathers’, a group of individuals who once conspired to assassinate Hitler.

Hassell’s paternal grandfather, Ulrich von Hassell, was a German diplomat during World War II. He was a leader of the German resistance, and communicated with British and U.S. intelligence. After the failed attempt to overthrow Hitler in 1944, Ulrich von Hassell was executed.

His maternal grandfather, Lt. Gen. Bogislav von Studnitz, was first commander during the occupation of Paris in 1940 during World War II; he was vehemently anti-Nazi and assassinated at Hitler’s order in January 1943.

The office is decorated with possessions such as a Samurai helmet, military caps, and a colonial map.

His great-grandfather, Grand Adm. Alfred von Tirpitz, built Germany’s Imperial Fleet for World War I. Prior to serving as the leader of Germany’s Imperial Navy, he commanded the German Imperial East Asia Squadron. It was then that Kiautschou became a German colony. Tirpitz helped start the Germania Brewery in Qingdao, which became the Tsingtao brewery.

He said he is grateful for these personal historical connections, for history books are not often readable.

He attributes the tragedies of modernity to an ignorance of history: for instance, the hastily drawn borders in the Middle East, inconsiderate of historical tribal conflicts.

“You shouldn’t have to suffer when you read history,” Hassell said. “It’s a huge problem, and it’s not necessarily getting better.”

“History is a kind of art,” historian Hayden White wrote in his essay, “The Burden of History,” where he comments on the burden of the historian who not only makes connections between the past and the present, but also science and art.

“All history can become personal,” Hassell said. “You must link to it in a way to make it alive.”

Although he is a military historian, Hassell has made an effort to break away from the familiar.

“That was unforgettable,” he said. “His merit was that he was the son of a famous man…I realized I could not live under the laws of my ancestors. I went my own way.”

Instead of becoming an ambassador or military leader, Hassell’s interests have run the gamut from foodie and photographer, to prepping the FBI’s upper echelon on counterterrorism techniques.

He was an adjunct professor for the graduate program of John Jay College of Criminal Justice, where he taught NYPD officers lessons on counterterrorism and leadership.

“It’s not an easy subject to cover, but it’s something that is desperately needed,” Hassell said.

Hassell is currently president of The Repton Group LLC, a corporate intelligence firm.

He has a wall for his photography in his office, including a photo he took of police officers standing in a destitute office in 1977 during one of blackout riots in Williamsburg. When asked why he was there, he said, “just for the hell of it.”

Near the entrance of his office, there was a photo of a pig that had earned an Iron Cross. “Pigs don’t just get an Iron Cross for looking pretty,” he said, sternly, for comic effect.

When Tirpitz, was running the German Navy in 1915, pigs were commonly kept on German warships as food. One pig escaped and the crew from a British cruiser took it in as a pet. Naturally, they named the pig Tirpitz.

During an explosion that damaged the British cruiser, it was said that Tripitz, the pig, swam around the ship for an hour, long after the crew members had evacuated.

The pig was awarded the Iron Cross for staying with his ship.

Most people who don’t know Hassell very well believe that he is a very stern man. But he constantly tells jokes, mostly about himself. Albeit, sadly, most do not understand his humor.

For his own entertainment, he purchases a bag of Tanzanian coffee from a local shop by asking for “German colonial-imperial coffee,” and enjoys the inevitable segue to talk about history.