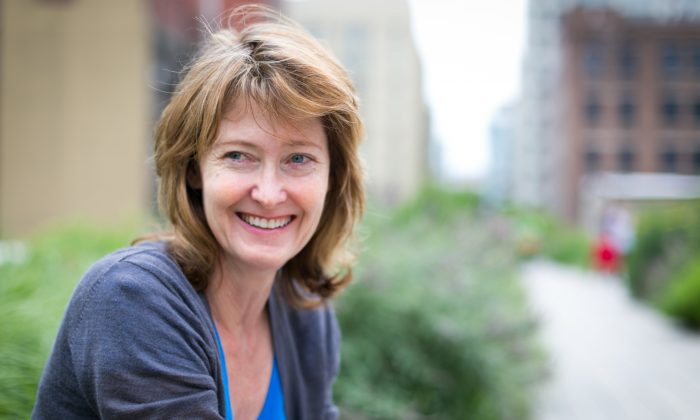 Elizabeth Garnett, formerly a radiologist at a black hospital during apartheid in South Africa, on the Highline in Chelsea, New York City on July 4, 2014. (Benjamin Chasteen/Epoch Times)
New York

This Is New York: A Radiologist Who Learned to Cherish Life Under Apartheid

NEW YORK—Tourists. They are the cause of the slowness of pace, the infinitude of unnecessary and poorly composed photographs. They instill vexation, irritation, and eye-rolling exasperation for busy New Yorkers amid their daily grind. Or at least, that is the stereotype. But stereotypes are often utterly wrong. Tourists, too, are humans with exceptional stories that are worth our time and respect.

This is particularly the case with Elizabeth Garnett.

In the midmorning hours of the Fourth of July, amid light droplets of rain, Garnett sat in contemplative solitude on the High Line.

She looked elegant, humble, and serious.

Garnett, 52, emigrated from South Africa to the United States 23 years ago. She came with her husband, a red-bearded man, who founded an audio tech company called Overture Audio. (A mutual friend had set them up on a blind date at a seafood restaurant in Johannesburg.)

She left behind a life as a radiologist at a black apartheid hospital, and eventually became a teacher for inner city youths at Philadelphia Community College.

Garnett was born in Melbourne, Australia, and moved to Johannesburg, South Africa, at the age of 3.

Her father, a calm man who speaks slowly and responds slowly, founded a company that makes eye glasses for miners, after he discovered that a number of them were “half blind.” They moved to Johannesburg, where there are currently 159 mines, 44 of them gold mines.

Johannesburg was a place where children were not closely watched. Children played piggy in the middle and ran into storm drains for fun. “Life was less structured,” she said.

Garnett went on to become a radiologist for an overcrowded, state-run black hospital during apartheid, a racial segregation policy in South Africa that lasted from 1948 to 1994. Her patients often had burn marks because they chose to visit witch doctors first.

She witnessed a tremendous amount of pain and suffering; she encountered a woman who had 27 hip replacements and people with Crohn’s disease.

She would visit children’s hospitals and see so many sick children that she began to wonder if all the children in the world were sick.

“Cherish your life,” she said. “You’re up one day, you could be down the next.”

Most of her students had full time jobs and some were single parents. They go to school by day; they work by night.

One student was a SWAT officer. He studied radiology during the day, and stormed into criminal houses at night. He was over 50 years old, and wanted to take up radiology after he retired from the SWAT team.

“You learn from their willingness to persevere,” she said. “They have to go to school under incredibly challenging circumstances.”

After witnessing incredible changes in societies and groups of people, she sees each individual with a human story that matters.