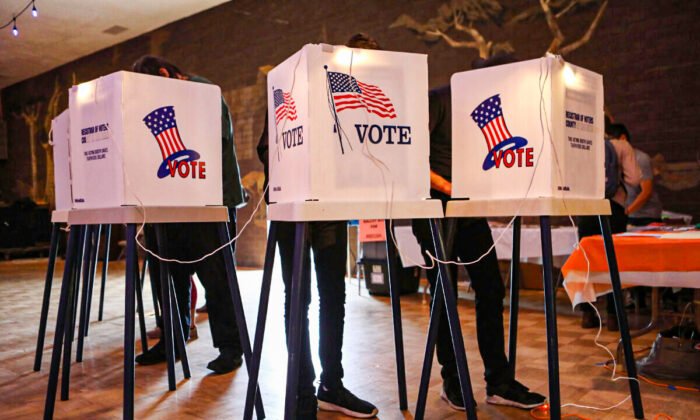 The vote is all an American conservative has got. That’s the painful reality that faces anyone resistant to the woke revolution that has overcome nearly all major institutions in American life.

The facts are simple. Liberals control the schools and universities. They control Hollywood and Silicon Valley, most of the media and publishers, the art world and culture sphere (museums, libraries, etc.), and most government civil service posts.

They’ve even captured human resources in corporate America, while the nongovernmental organizations they run outnumber those run by conservatives by a long sight. The only broad-based exertion of control left to conservatives is the ballot booth.

It sounds depressing, and many conservative intellectuals hate the idea. They write op-eds and magazine articles, push hard truths, and debate policy. They assemble conferences and panels, issue newsletters, and host podcasts, all in the service of spreading conservative belief and discrediting progressive belief.

It’s noble work, and it should continue.

But in an Age of Woke, debate is no more. The woke temper assumes that intolerance is a virtue and pluralism a weakness. Look at the faces of woke protesters and you see a fiery, punitive, absolute, and illiberal personality in action.

The left went on an all-out and open wartime footing in November 2016 (they’d been on a guerilla footing before that), and they recruited, intimidated, guilt-tripped, and bullied moderate liberals of the old Bill Clinton–Democrat profile into becoming compliant followers and functionaries of the movement. The actual numbers of hard wokesters may have been small, but they got liberals to join marches, sign petitions, and applaud and support the four-year effort to “Resist!” to the point that it looked like a majority of Americans hated Donald Trump and Trumpsters with a passion.

The tactics weren’t subtle or brilliant, just effective. While conservative thinkers and intellectuals out-argued “The View” and the professors over and over, Stacey Abrams ran circles around Georgia Republicans, and Soros-backed leftists took office under the radar and did shocking things. Right-wing minds beat them at the ideas game, while left-wing operatives grabbed political posts. Which side would triumph?

Margaret Thatcher spoke of how important it was to win the debate, but that was another time.

Having secured the schools and the media and the entertainment industry decades ago, leftists managed to produce a population of young Americans, millennials, and older Gen Zers with hardened beliefs and easily offended temperaments. The kids heard leftist opinion so firmly and repeatedly over their adolescence and early 20s, in classrooms and on TV, that they identified it with truth.

That makes non-progressive opinion into automatic falsehood, and evil, too. We now have two generations that perceive the other side as demonic, and why should demons get a place at the table, a voice in the discussion?

Millennials don’ wanna hear it and don’ wanna talk about it. The old way of hearing multiple opinions and letting the people decide doesn’t impress them.

A clever libertarian kid in college, natty and bow-tied with Ayn Rand in hand, who points out their ignorance and inconsistency, doesn’t shake their faith one bit. He just annoys them—get him out.

The columnist who highlights the hypocrisy and ingratitude of “the Squad” has accomplished nothing. They don’t care. The marketplace of ideas is closed; the forensic climate has ended; the battle is all political.

It’s a political battle that’s personal, a simple matter summed up in a curt question: “Who rules?” In other words, everything depends on the vote. Leftists understand that. Mark Zuckerberg knew it well in summer 2020. The Jan. 6 Committee members understand it, too. Their deliberations are aimed at November 2022 and November 2024, not January 2021.

And the point for the left is not to win the upcoming elections. They want to win every election, and they believe that they should win every election. No modesty on their part, no expectation that sometimes you lose, and sometimes you deserve to lose. They have the conviction of the righteous, the certitude of the fit, while the other side is unfit, forever so.

I’ve seen them at work. They possess a ruthlessness that conservatives don’t. Prudence is a conservative trait, not a progressive one. Progressives think big; they dare to dream. They envision a Green New Deal that’s downright fantastical, and the very unrealism of it thrills them. A conservative or two in the room rains on their parade, a sole dissent killing the enthusiasm. Only unanimous endorsement will satisfy our progressive dreamer.

That’s why it’s not enough for progressives to outnumber conservatives within an academic department, a business unit, or a government office. The bare presence of a single right-wing voice irks them.

They ask, “Why do such people still exist when we have history and justice on our side?” They must be removed, all of them, not a single conservative rogue or gadfly or outsider allowed. They don’t see it as a political process, certainly not a democratic one. It appears more as a cleansing operation, a purification. Get those malodorous characters out of here.

Now that more and more institutions have been sterilized in this way, nothing remains for the exiles but the vote, as I said.

The left abhors Trump for this very reason. He didn’t open up any of the institutions to conservative representation, didn’t make them return to the pluralism of the past. Hollywood didn’t recognize Trump’s popularity and set about producing Trumpist movies and shows. Academia didn’t create centers and hire teachers with a nonprogressive outlook. On the contrary, political correctness in those spaces got worse.

But he did win the vote and move to the White House. It surprised and shocked the liberal/left elite, proving to them that dominance of media, education, and government doesn’t ensure an obedient populace. Hence the ballot harvesting, mail-in voting, multiplying drop boxes, and partisan get-out-the-vote efforts passing themselves off as neutral. The left is tireless and vigilant on this.

If Republicans don’t understand that the vote is issue No. 1, that election fairness must be a core concern of every campaign, they will find themselves outfoxed every two years, and roughly half of the American electorate will become ever more despondent, suspicious, and disaffected.