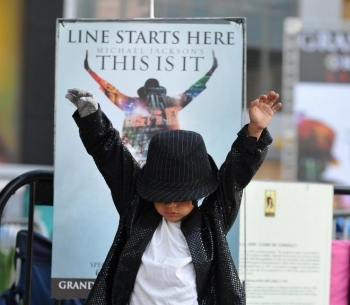 Five-year-old Victor Chupina shows his moves after sleeping outside for a second night to buy tickets to a special pre-screening of the Michael Jackson film 'This Is It,' at LA Live in Los Angeles on September 26. (Robyn Beck/AFP/Getty Images)
Entertainment

‘This is It’ Michael Jackson Film Tickets Sell Out Worldwide

Stephen Summer
View profile
Follow
biggersmaller
Print
NEW YORK—Tickets for "This is It," a music film documentary about the life of pop star Michael Jackson, are beginning to sell out at theaters around the world.

Theaters started selling tickets for the Sony Pictures film on Sunday, September 27. "This is It" will open next month, on October 28, for a two-week limited run.

The film "This is It" is billed to as a compilation of interviews, rehearsals and backstage footage of Michael Jackson during his world tours.

"This is It" is also the name for what was meant to be Michael Jackson's comeback tour to be held in The O2 Arena in London, U.K., in late 2009. The shows were canceled after Jackson died of drug overdose on June 25 of this year.

The Associated Press (AP) reported that all 3,000 tickets for an advanced screening at Regal Cinemas Stadium 14 in Los Angeles were sold out in two hours. AP also quoted Sony Pictures as saying that 30,000 tickets were sold in less than a day in London.

On Sunday night, fans braved the elements to get access to tickets for the film. In Los Angeles, some fans were reported to have camped out since Thursday afternoon in order to get tickets for "This is It."

"This is It" will show in fifteen cities around the world, including Los Angeles, New York, London, Seoul and Rio De Janeiro.