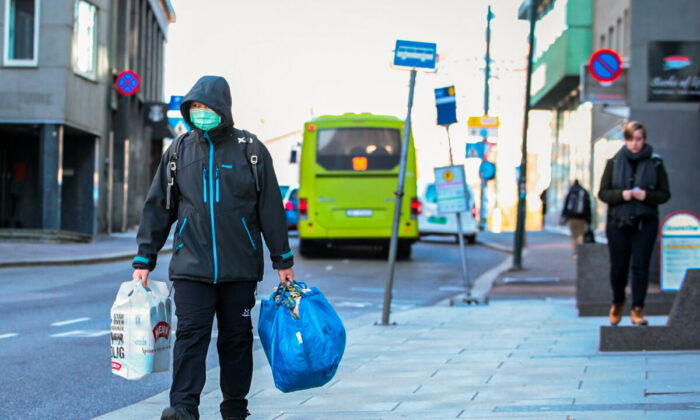 A man wearing a mask carries shopping bags as he walks on the streets of Oslo following an outbreak of COVID-19 in Oslo, Norway, on March 13, 2020. (NTB Scanpix/Hakon Mosvold Larsen via Reuters)
Business Columnists

It seems obvious that wherever vaccine mandates, mask mandates, and lockdowns have been imposed in response to COVID-19, progressive political and media elites have been the driving forces behind them. This is clear to those of us alive today, but it is worth considering whether future history books will attempt to erase progressives’ culpability for the disasters their COVID policies have caused. The argument that follows is speculative, but bad ideologies should be held to the fires of their own making, and it seems to be in the nature of progressivism to attempt to escape the historical reckoning it is due.

Not long ago, it seemed more likely that the progressive elites would eventually just declare COVID-19 to be over and herald themselves as humanity’s saviors. But as the pandemic has worn on, the cracks in the COVID disinformation regime have widened for all to see. The failures and destructiveness (pdf) of their policies are now beyond deniability to reasonable people, and so long as it is well known that progressivism was the driving force behind those policies, this episode will tarnish its reputation and its core dogma that technocratic social planners holding correct moral beliefs will save mankind from itself.

Therefore, it now seems likely the progressive elites who engineered and proselytized these disastrous public health policies will begin to distance themselves from those actions and eventually attempt to paint a new history absolving their ideology from today’s failures. Philosophy professor Alex Rosenberg argues in How History Gets Things Wrong that narrative histories almost always get the “why” of history wrong because the narratives we spin about history, especially popular histories, are usually motivated by our own moral causes. If true, perhaps even the “what” of history can be distorted for the same reasons.

As Murray Rothbard demonstrated in The Progressive Era, American progressivism was born of just this type of motivated moral cause: “Progressivism was, to a great extent, the culmination of the pietist Protestant political impulse, the urge to regulate every aspect of American life, economic and moral—even the most intimate and crucial aspects of family life. But it was also a curious alliance of a technocratic drive for government regulation, the supposed expression of ‘value-free science,’ and the pietist religious impulse to save America—and the world—by state coercion. …

“Their values, the very nurture and education of their children, were to be determined by their betters. The spiritual, biological, political, intellectual, and moral elite would govern, through state power, the character and quality of American family life.”

If today’s progressives are the inheritors of this combined sense of moral and intellectual superiority, then it stands to reason that going forward they will bitterly resist association of their ideology with the present moral and intellectual failures that their covid policies represent. They will be morally motivated to recast their ideology as having been on the “right side of history” and to rewrite the history that will eventually be taught to those too young to have lived through the events themselves.

Those who would oppose this rewriting of history should therefore be on the lookout for ways it might be carried out over the next few generations.

First, corporate media outlets and the communications departments of public health agencies may increasingly distance themselves from their own bad policies. This has already begun. They may attempt to cover their retreat by saying the “science has changed” or that the latest viral variant warrants a lighter government response.

Regardless of what they have said over the past two years, and how vehemently and censoriously they have said it, eventually all major media and public health agencies will be on record as having opposed further lockdowns and vaccine or mask mandates. If nothing else, they will still be in charge when COVID hysteria finally does end for good, and ending those policies will be their official final word. If they are able to choose their legacy, it will not be that of the preceding two years, in which they championed those policies, but that of their final act of ending them.

Second, for several years after COVID, while people still vividly remember who pushed these policies, we can imagine progressive commentators referring to those policies not as things they supported, but as things that were done by “America” or by “society.” This will be “a time for healing,” not a time for blame. Such statements may not even be intentionally deceptive. It is simply easier on a person’s conscience to refer to a consequential mistake as something “we all did” rather than as something “I advocated.” Intentionally or not, if the weight of public discourse proceeds this way, the public memory of who supported those policies will have already begun to warp.

Third, the first textbooks to discuss the COVID-19 era from the perspective of history, a history which will have to concede the disastrous consequences of the policies that were implemented, will be read by children who were not yet alive or were too young to remember it. This will be the first generation to form an understanding of the COVID-19 era who did not live through it themselves.

While a historical narrative that doesn’t mention the role progressives played in pushing lockdown, mask, and vaccine mandates would seem obviously wrong to those of us who lived through them, it wouldn’t stand out to those who did not. And if minds are sufficiently softened during the immediate post-COVID-19 era, in which the public discourse will diffuse blame, those who did live through the COVID-19 era may not notice this omission from their children’s history books or may not care enough to correct it.

Those history books will likely include two broad facts, both of which will be as true as they will be misleading. First, they will say lockdowns, mask mandates, and the development of the mandated vaccine all began during the Republican Trump presidency. Second, they will likely be able to say those policies were all ended during the Democratic Biden presidency. These facts will associate in the minds of a generation the onset of such policies with a politician linked to conservatism (which libertarianism will be lumped into) and the discontinuation of those policies with a politician linked to progressivism.

Only time will tell whether anything like this will actually occur, but history seems to suggest it likely will. How many people today are aware that America’s past experiments in Prohibition, ethnic discrimination, and eugenics were all once fervent policies of progressivism (pdf)? And in many ways it already seems to have begun: only days after a Johns Hopkins University study found that lockdowns caused far more harm than good, the Biden administration claimed it has “not been pro-lockdown; that has not been his agenda—most of the lockdowns actually happened under the previous President.”

Resisting this ideological tendency to rewrite the history of today’s public health policy errors—not as a petty exercise in gloating over others’ failures, but as a means to help future generations avoid the next set of destructive progressive ideas—requires us to be aware today of how that rewriting of history might begin and to be prepared to educate the public on what has been omitted once it does.