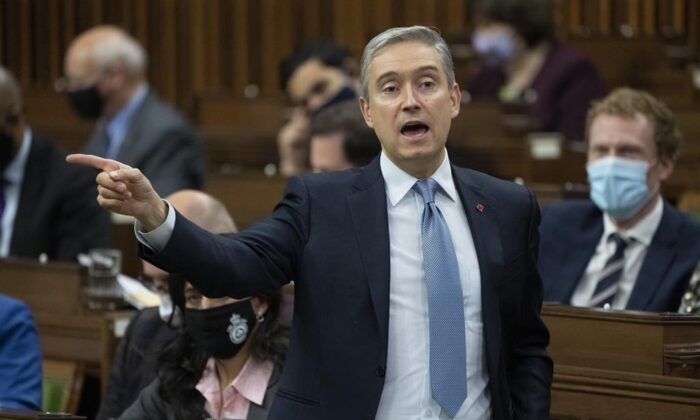 ‘This Is Beyond My Expectations,’ Champagne Says of Canadian Biomanufacturer Rebound

At the outset of the pandemic, Canada’s lack of biomanufacturing capability came into sharp focus, and the incapacity to produce COVID-19 vaccines domestically caused some major initial stumbles in the country’s early vaccine rollout.

Champagne says his vision was to rebuild the sector based on the different families of vaccines, as well as improve the capacity for contract manufacturers in Canada.

“This is beyond my expectations,” Champagne said in an interview Monday.

The government spent billions of dollars in an attempt to rebuild Canada’s flagging biomanufacturing capabilities as quickly as possible, after decades of decline.

Canadian company Medicago benefited from its largest investment, $173 million, to support the development of a plant-based COVID-19 vaccine and establish a large-scale manufacturing plant.

Now, Medigaco is churning out doses of its made-in-Canada vaccine in anticipation of its application to Health Canada, after trials showed the drug is 75.3 percent effective against the Delta variant of COVID-19.

Medicago plans to take those results to Health Canada before the end of the year, as well as regulators in the United Kingdom, the United States, the World Health Organization and eventually Japan.

It has already started building inventory, 75 million doses of which have been promised to Canada.

Champagne’s plan to have several types of COVID-19 vaccine produced in Canada appears to be coming together.

Moderna and BioVectra are set to manufacture mRNA technology in Canada. If Medicago gets a green light from Health Canada, it will produce its plant-based vaccines. Novavax has already filed for regulator approval of its protein based vaccine, which will be manufactured in the National Research Council’s Biologics Manufacturing Centre in Montreal. Sonofi will spend $925 million to build a new vaccine facility in Toronto to bolster manufacturing capacity.

And just yesterday Merck Canada announced it inked a deal with Thermo Fisher Scientific to manufacture the oral antiviral COVID-19 treatment, molnupiravir, at its facility in Whitby, Ont. with a mandate to supply the product domestically, as well as to the United Kingdom, European Union, Asia Pacific and Latin America.

It’s a sign more companies see Canada as a stable place to set up shop, he said.

“I think what ? attracts them most is really the talent pool we have, the open and stable environment to produce, the fact that we kept our supply chain open,” Champagne said.

To build on the progress, Champagne said Canada will need to focus on research and innovation to attract investment. The goal is for local manufacturers to provide drugs not only to Canada, but the world.

The home-grown company got a large cash injection from the government, but it still would not have made it without large private investment in the early days of its inception, said president Takashi Nagao.

“Canada compared with the U.S. still has what I see as a younger or less mature capital market to promote emerging licensed companies. So, these companies tend to go to U.S. NASDAQ and others for the funding,” said Nagao.

“I think the government can play a vital role to help the funding during the early stage of the company to grow and be ready in the situation like this.”