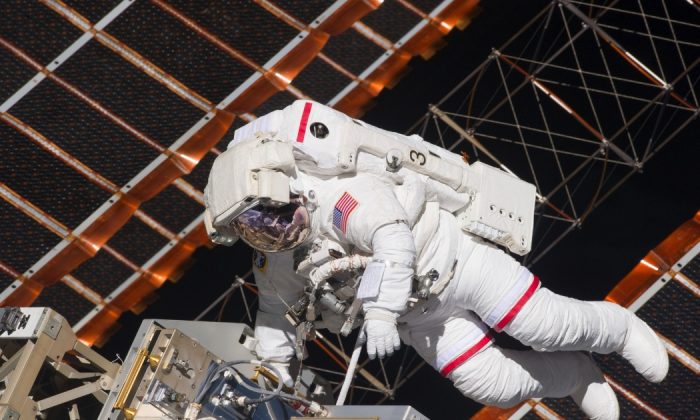 NASA spokesperson denies the claims, saying that 'no new potential leak sites have been identified'
By Jack Phillips

Russian cosmonauts have found small cracks on the International Space Station (ISS), prompting fears from officials that the fissures could widen.

“Superficial fissures have been found in some places on the Zarya module,” Vladimir Solovyov, the chief engineer of rocket and space corporation Energia, told the state-run RIA news agency. “This is bad and suggests that the fissures will begin to spread over time.”

It’s not clear if the cracks caused any air to leak into space from the ISS.

A spokesperson for NASA denied the claims to the Daily Mail, saying, “there are currently no issues impacting crew or normal International Space Station operations, and no new potential leak sites have been identified.” The Epoch Times has contacted the agency for comment.

Last year, NASA and the Russian space agency Roscosmos searched for a small air leak in the space station hovering above Earth when air pressure dropped.

And Russian officials last month said a software glitch, and a possible lapse in human attention, were to blame for throwing the ISS out of control. Jet thrusters on the Russian research module Nauka inadvertently reignited a few hours after it had docked, causing the entire orbital outpost to pitch out of its normal flight position with seven crew members aboard.

Roscosmos last month reported a drop in pressure in the Zvezda service module, which provides living quarters for crew members on the ISS that was caused by an air leak.

Russia and the United States jointly launched the ISS in 1998, which at the time was hailed as a significant effort to reconstruct tensions between the former Cold War opponents.

Earlier this year, Russian officials said that it will withdraw from the ISS by 2025 and is now working on its own space station.

“We can’t risk the lives [of our cosmonauts]. The situation that today is connected to the structure and the metal getting old, it can lead to irreversible consequences … to catastrophe. We mustn’t let that happen,” Deputy Prime Minister Yuri Borisov told state television in April 2021.

Those comments were made a few days after President Joe Biden unleashed a wide array of sanctions on Russia, including to its sovereign debt market over alleged cyberattacks, election interference, and military incursions near Ukraine. The Treasury at the time blacklisted 32 Russian entities and individuals that it claimed had carried out Russian government-directed attempts to influence the election as well as other alleged “acts of disinformation and interference.”