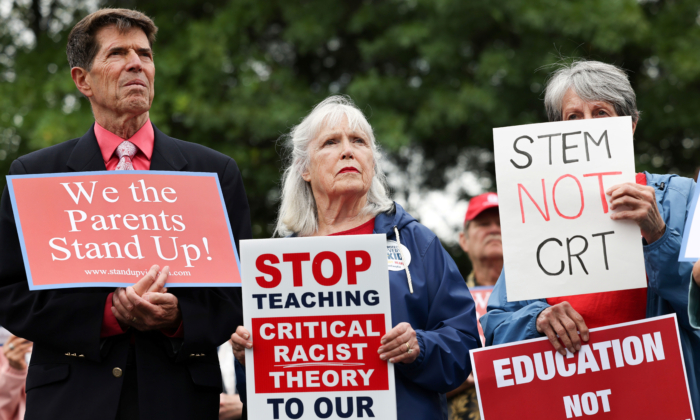 A fight for the future of the nation
By Beth Brelje

Far-right white people are in a moral panic over Critical Race Theory (CRT) because they fear losing political power. These are the sentiments taught to Pennsylvania educators about parents who attend board meetings in opposition to CRT. The training was a webinar presented by Justice Leaders Collaborative, a Michigan-based social justice training organization that did not respond to a request to participate in this story.

Justice Leaders Collaborative gave a politically charged CRT webinar for Pennsylvania educators in the fall of 2021. A video of that webinar offers a window into how the movement sees those who don’t support CRT in schools.

A Chester County Pennsylvania parent from the Great Valley School District obtained the hour-long training last week, through an online link provided in an answer to a Right-to-Know request. The training has since been removed; the link now goes nowhere. The Epoch Times pulled information from the training before it was removed.

The training was offered to members of the Pennsylvania Association of School Administrators (PASA) across the state and just over 100 school administrators signed up for the free webinar at that time, according to Mark DiRocco, PASA executive director. PASA often offers training on current topics to its members, which include school superintendents and other high-level administrators.

“At that time, a lot of people didn’t even know what Critical Race Theory was,” DiRocco told The Epoch Times. “A lot of our school leaders were dealing with questions from the public and from their board and staff. It was very much in the news. And honestly, most of them didn’t know what it was, and had never dealt with the issue before.”

The webinar was to help administrators understand CRT.

Most of the webinar was presented by Shayla Reese Griffin, who identifies as a black middle-class woman. Griffin, co-founder and facilitator of Justice Leaders Collaborative, explained that racism is not only about the actions or animus of individuals. Racism is not biological, but it is a system of unearned advantage for white people and an unearned disadvantage for people of color, and it persists even if no one is consciously thinking about it. This is the backdrop of what Griffin calls real CRT. However, she spent most of her time talking about the anti-CRT movement.

“This is a movement of the far-right,” Griffin said. “They are really just using Critical Race Theory as a kind of an umbrella term for any kind of cultural things that the far-right isn’t interested in.”

The goal of the anti-CRT movement is to “maintain political and cultural power by riling up their base and stopping potential voters from learning the true history and reality of race and racism in our country,” Griffin told educators. “The long-term ability of the far-right to win elections at the local, state, and federal levels is coming into question as the nation gets more diverse, and as more white people are unwilling to support racist politicians or policies.” This became clear after the last presidential election, she said.

“Schools teaching the real history of this country and asking students, especially white students, to have a stake in making it more equitable, could lead to new generations of adults unwilling to support far-right politics, policies, and cultural norms.”

CRT will lead to generations of new kinds of white adults who are unwilling to support far-right politics, Griffin said.

“This is about power. The goal of this [anti-CRT] movement is to maintain political power,” Griffin said. “Schools are a site of that conflict because those folks know that, how students graduate from school, and what they think about justice, is going to matter in how they vote, and matter in the long-term impact to our country.”

Later in the webinar, educators were reminded that teaching CRT is a fight for the future of the nation and were asked to think about what side of history they want to be on.

Educators were advised that many people who attend school board meetings to complain about CRT are not even parents. Their presence at board meetings is an alleged scare tactic.

Educators were encouraged to communicate with legislators, and community members in their sphere of influence, to speak out against the anti-CRT movement as loud as the opposition.

“People are going to be mad because of what you do,” said Sarena Shivers, deputy executive director of the Michigan Association of School Administrators, who spoke briefly in the webinar.

“You’ve got to focus on what your message is. Do not get distracted by the squeakiest wheel. Do not get down in the weeds trying to argue fine points with people who are not really interested in that. This is really a fight for the future of our nation, and really a fight about what the purpose of schooling is.”

Across the nation there have been some legislative efforts to ban teaching CRT.

Shivers said many teachers across the nation are signing “I will teach the truth” pledges and she suggested Pennsylvania educators do the same. The pledge says educators refuse to lie to young people about U.S. history.

“Those are all kind words they use to not come out and say Critical Race Theory,” Grady, who viewed the training, told The Epoch Times. She noted that the tone assumed everyone in the training supported CRT being taught in schools and none were right-leaning. “They assume that everybody agrees with Critical Race Theory—this theory of white supremacy, and systemic racism. Then if you don’t agree, you simply don’t recognize the truth. We’re just being divisive. You’re racist if you don’t agree … It can’t possibly be that there’s some other explanation besides white people are racist.

“I look at it as a religion. This is a deeply held belief system by this group of people, which is fine. But it doesn’t belong in education. This is an ideological belief system and our public schools are supposed to remain neutral. And, it’s an anti-American message. The whole system of America is corrupt and racist. And that’s a violation of the public school codes. You’re not allowed to teach anti-American content.”

DiRocco said that once you have a guest speaker and you turn them loose, they can say what they want to say.

“We were just trying to get information out there about what it is and what it isn’t,” DiRocco said. “We serve all political aspects. Our members have the full array of political affiliations and inclinations. We try to stay as apolitical as possible in our work. We want to be in good standing with both sides of the aisle so we can communicate with speak with them on a variety of issues. So that certainly was not an intention on our social relations part to promote one political opinion to another political opinion, that’s not what we do.”

Yet, the PASA website has a section on equity and racism, including resources for teaching Black Lives Matter at school, and articles including “We Need to Name it: Racism is a Public Health Crisis,” from the Georgetown University Center for Children and Families; “How to Root Out Anti-Black Racism from Your School,” from Education Week; and a CNN/Sesame Street racism town hall.