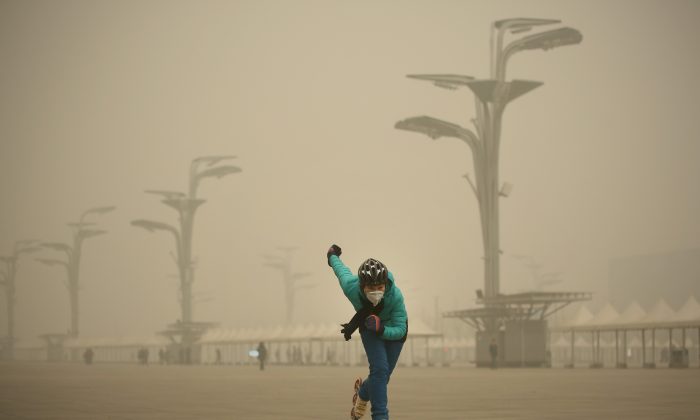 ‘This is a Country of Cowards’: A Chinese Mother’s Complaint About Smog that Went Viral

The following is a direct translation of a personal account written by the WeChat user yashalong2000, which went viral in China, describing the frustrations and fears of ordinary Chinese under smog-ridden skies. The post was written in early January and was later removed by censors. It has been preserved by overseas websites. The woman’s name and location is not identified, but her heartfelt note struck a chord and was widely circulated online. — Epoch Times translation team

I feel irritable these days because of the smog. My child has a sore throat and is coughing. I let her take the day off from school. On WeChat I advocated installing air purifiers in schools, but I’m not sure how effective they would be. Parents often feel depressingly powerless in China.

We’ve had a “gray haze” for many years. At first we didn’t know what it was. We were foolishly thinking that it was fog, or dust, or something else. We didn’t know that something called PM2.5 was penetrating the alveoli cells in our lungs and getting into our bloodstreams.

We have to thank the U.S. Embassy to a large extent for this information. Only after they insisted on publishing the PM2.5 index every day did a lot of us learn about it and how terrible it is.

At first, Chinese media ridiculed the U.S. Embassy, saying that this was interfering with our internal affairs and was applying U.S. values onto China. I still remember the smiles on the faces of those TV news “experts” who said that PM2.5 was nothing to worry about, and that China did not need to publish that data.

When they could no longer conceal the truth of the matter, they then admitted that what they had told us was not true. But no one apologized. There has never been an apology.

Did they really not know any better? Does a big country with more than one billion people and a huge pool of science and technical researchers not know such a simple fact?

Sometimes I really want to tell them why I cannot hate America! I know there are conflicts of interest and competition between countries. But I also know that a group of Americans told us Chinese that our air was very dangerous and that there was an index called PM2.5 that was seriously over the standard. They told us we should find a way to clean up the air and wear masks, or else our health would be seriously damaged. But our own media told us that these Americans were lying. Whom should I hate?

Two days ago I read an article on smog by Yang Yue [The piece is titled “What kind of mercilessness drives you to force children studying in smog?” and was first posted to WeChat]. It was deleted by the censors right after I shared it. The article might have been right or wrong, that’s irrelevant. The problem is that it was deleted. Why was it deleted? We all know why.

I was very upset about my child’s sore throat, and my mind was filled with complaints about our leader’s lack of concern. I vented my frustration at the dinner table: “Why are there air purifying systems in government offices but not in schools? I think the best way to get our leaders to do something about the smog would be to let them do their work outdoors!”

I said some other things too that I will not repeat here. My father-in-law was very nervous hearing me say such things in front of my child. “What if the child goes around and spreads this,” he told me. His comment made me even angrier. The air quality is so bad, yet I’m not supposed to say even a few words to criticize the government! What kind of society is this?

Of course, I understand where my father-in-law is coming from. He is of the generation crushed by fear. They have experienced fear that we have not, and this fear eventually turned into worship. I don’t have much hope for that whole generation; their spirit is almost entirely stamped out. I just wish they would not affect the next generation so much. I have always rejected advice from the older generation, partly because of this.

But don’t we younger people have this fear as well? Of course, it is not as strong, but who can deny its existence? Writing this article, I intentionally omit a lot of what I want to say.

This is a country of cowards. The brave ones who speak up pay a price. There are many examples, such as the Sun Zhigang incident. The reporters who reported on it paid for it with their own futures and have been forgotten by us.

I think we are better off than the previous generation because we know about the existence of fear, and we know that fear is not truth. We also know that beneath the fear there is a choice between right and wrong. This is like a seed, which may bloom in the future to restore the blue sky for generations to come.