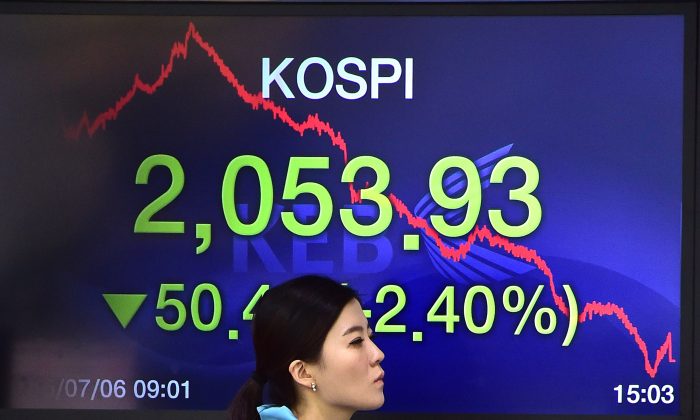 Forget about the purchasing managers surveys, which tell you industrial activity in China is grinding to a complete halt. Not 7 percent growth, not 6 percent growth—zero growth.

Ok, let’s not completely forget about them. The official survey of purchasing managers in manufacturing for August declined to 49.7 from 50, which signals recession. Another representative survey done by Caixin declined to 47.3, the lowest level since 2009 or the depth of the great recession.

However, the real interesting data about China came out of Korea on Tuesday, Sept. 1. The South East Asian powerhouse reported a complete collapse in trading activity. Exports in August crashed 14.7 percent compared to a year earlier and imports declined 18.3 percent.

The country still logged a positive trade balance of $4.3 billion, but this figure is shrinking fast—not very surprising given the collapsing volume of trade.

Since a quarter of Korean exports go to China, the figure is representative of the slowdown within the Chinese economy. Exports to China are down 8.8 percent over the year, despite a rise of 12 percent in the Chinese yuan over the same period. The stronger currency made imports cheaper and should have spurred demand for Korean products, but it didn’t.

So even as China’s balance of trade shrinks, the aggregate drop in activity (both imports and exports decline) is causing havoc among its trading partners who are used to shipping vast quantities of raw materials (Brazil, Australia, Canada) or equipment (Korea, Germany, Japan) into China, which then uses the inputs to export a vast amount of consumer goods to the rest of the world.