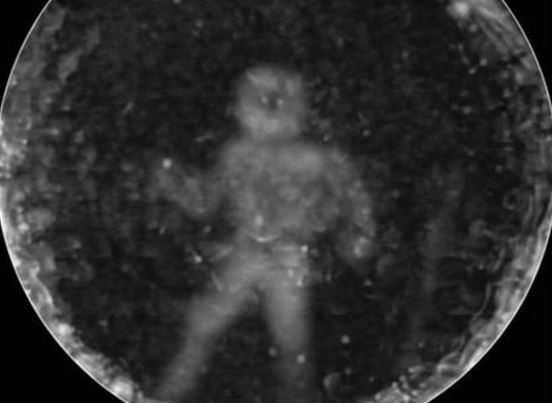 This Image Shows What Dolphins See When Using Echolocation

Scientists have captured a picture that they say shows how dolphins see the world around them using echolocation.

Jack Kassewitz, the founder of the research organization Speak Dolphin, says he came up with the process to replicate echolocation.

“When a dolphin scans an object with its high-frequency sound beam, each short click captures a still image, similar to a camera taking photographs,” Kassewitz explained in a statement.

Echolocation is when dolphins produce short broad-spectrum burst-pulses, which sound like clicks, that are channeled at certain places. The sound waves that are then reflected from objects of interest provide information to the creatures.

John Stuart Reid invented CymaScope, a patented imaging process that imprints sonic vibrations on the surface of water. Kassewitz worked with Reid and the process to get the groundbreaking image.

“Each dolphin click is a pulse of pure sound that becomes modulated by the shape of the object,” Kassewitz said. He then used new technology to transform the 2-D image into a 3-D image.

“Seeing the 3-D print of a human being left us all speechless. For the first time ever, we may be holding in our hands a glimpse into what cetaceans see with sound. Nearly every experiment is bringing us more images with more detail,” Kassewitz said.

There, Kassewitz’s colleague Jim McDonough submerged himself in front of a female dolphin.

As the dolphin, Amaya, directed her echolocation beam to McDonough, high-specification audio equipment recorded the signal.

That recording was then sent to CymaScope’s laboratory in the United Kingdom, where it was imprinted onto a water membrane. After enhancing the resulting image, it was transformed into the 3-D image.