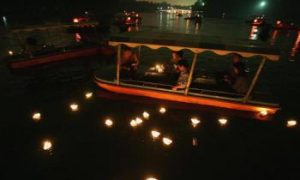 Moon Festival to Shine in Australia
0

Rumors circulated that medical students at Columbia University were stealing cadavers from cemeteries. The “Doctors' Riot” raged through New York for two days, starting on April 13, 1788. The mob of about 5,000 went through the laboratories and reburied every cadaver they found.

They then began searching the homes of neighborhood doctors. They took a group of medical students hostage, later relinquishing them to the authorities. A militia finally quelled the riot on April 14, firing on the crowd and killing three people. None of the doctors or medical students were killed.

Legally hanged criminals could be used for medical research. Penalties on tomb raiding were increased after the riot.

The iconic center of art and education, known to New Yorkers for generations as simply the Met, was incorporated on April 13, 1870, for the purpose of “encouraging and developing the study of the fine arts, and the application of arts to manufacture and practical life, of advancing the general knowledge of kindred subjects, and, to that end, of furnishing popular instruction."

The Union League Club founded the cultural institution. John Jay, one of the founding fathers of the United States was among the club's members. It was Jay's brainchild. He first conceived of it in 1865 while in Paris, and the construction began in 1871.

Artists and poets had their hand in the museum's formation as well. Poet William Bullen Bryant, painter John Frederick Kensett, and sculptor John Quincy Adams Ward were all on the board of trustees that was formed in 1870.

A Marist poll released April 13 of last year showed Bloomberg had an approval rating among voters of 56 percent. Better yet, 38 percent said he was the “best mayor for New York City in three decades,” with Giuliani not far behind at 31 percent. A Marist poll released March of this year, showed Bloomberg's approval rating at 39 percent—its lowest point during his tenure.