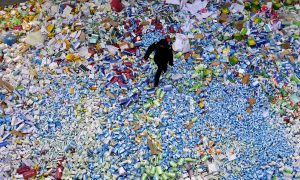 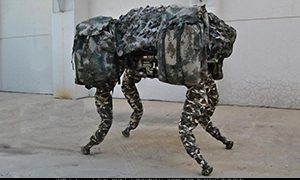 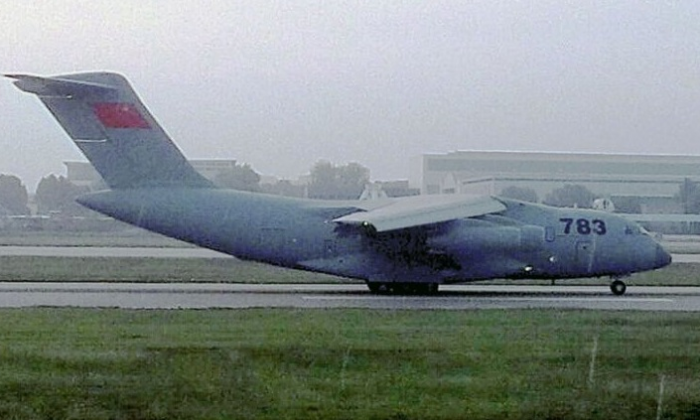 The Xian Aircraft Corporation's Y-20 heavy freighter is seen on a runway in China. The aircraft could increase China's ability to project power. (CJDBY)
China

This Clumsy Freighter Is a Game Changer for the Chinese Military

China’s new Y-20 heavy freighter aircraft is a hodgepodge of counterfeits that the regime is touting as a landmark of Chinese innovation. Yet, writing off the new plane as merely another Chinese counterfeit could be a dire mistake.

By itself, the massive plane could extend the reach of China’s military into the deep west of the country, or far south and east onto disputed islands. Taken in a broader context, China plans to both export and create variants of the Y-20, which could include Chinese models of some of the most feared aircraft on the modern battlefield.

The roots of the Y-20 begin like many other Chinese military vehicles.

It begins with an aerospace engineer by the name of Dongfan “Greg” Chung. The 75-year-old man from Orange County was sentenced to 24 years and five months in prison in September 2011 for spying on behalf of the Chinese regime.

Chung stole more than 250,000 documents from Boeing and Rockwell, which he supplied to China. Among them were designs he stole in 2006 of the C-17 Globemaster III, which is a Boeing freighter that China’s new Y-20 bears a striking resemblance to.

The Y-20 seems to have pulled from other designs as well. A 2011 aviation report from IHS Jane’s notes it also likely pulls from designs of the Ukrainian An-70 and the Russian Il-76 heavy transport planes. Jane’s notes that Ukraine had sold China designs of similar aircraft, and early Chinese reports said the Y-20 included parts from Russia’s heavy freighter.

China had good reason to want the foreign designs. A congressional report notes in 2010 that China was making little progress on developing transport aircraft. This flaw was also cited by Australia’s Air University recently, which stated “China previously was unable to build heavy transport aircraft, so it has relied on a small number of Russian Ilyushin-76 (IL-76) aircraft for strategic airlift since the 1990s.”

Development of the Y-20 seems to have picked up steam. Earlier this month, IHS Jane’s, a global intelligence company, reported that China’s Y-20 had entered its second phase of testing, after the aircraft made its first flight on January 26, 2013.

The Y-20’s move into the second phase marks advancements taking place behind the scenes—if China is following common definitions. As Jane’s notes, the first phase is on aerodynamic limits and loading, while the second phase is on “testing the aircraft’s radar, navigation systems, autopilot, de-icing system, environmental control systems, and reliability in complex weather conditions.”

The eventual third phase is on exposing the plane to humidity and extreme temperatures, as well as testing it in high altitudes and on rough surfaces.

A Question of Logistics

While logistics may seem like a trivial part of a military, it is actually a major and extremely fundamental capability—and one desperately needed by the Chinese military if it’s going to pose any significant threat.

As things now stand, logistics is one of the China’s military’s most basic flaws on land, sea, and in the air. China is still heavily reliant on railways to transport military assets over long distances.

China’s lack of logistics means its ships can’t stay at sea for long periods of time since they lack friendly ports. Its aircraft can’t conduct long-distant operations without landing to refuel. And its ground forces need to be carted around on railways that would likely become key targets in an actual conflict.

In the South China Sea, China has been trying to bridge these gaps by building airstrips and ports on disputed islands—or by simply building new islands on top of reefs. On land and in the air, however, China faces a technological gap, and the Y-20 is their bid to mend this to a degree.

The key phrase behind the Y-20 is “projection of power.” One of the key draws to the huge freighters is that they can be modified to serve different purposes. In terms of logistics, they can be used as refueling planes for jets, or they could be used to transport paratroopers or military equipment.

The Y-20 can carry up to 200 tons, enough for China’s largest tank, the 58-ton Type-99A2. It can also fly up to 9,400 miles, which according to the state-run China Daily, “means it is able to reach every place in Eurasia, Alaska, Australia and northern Africa.

While logistics may be China’s most desired uses of the Y-20, logistics will just be one of the freighter’s roles. China plans to export the Y-20, and also plans to modify it for several variants—from spy planes to bombers.

Current writings on the Y-20 in China’s state-run press typically only state its uses in transport and “humanitarian relief.” Yet, there have been sporadic mentions of its other purposes.

“We will develop a number of variants of the Y-20 and we are definitely going to export them,” said Tang Jun, chairman of Xi’an Aircraft Industry (Group) Co, a subsidiary of Aviation Industry Corp of China, according to the state-run China Daily.

There currently seems to be no mention of the exact types of variants China plans for the Y-20. Yet, a few hints can be gained from looking at the Chinese freighter it will replace, the Y-8.

The Y-8 currently has close to 30 variants, which include geophysical survey aircraft and a gunship armed with three heavy machine guns and two heavy cannons.

Gunships are typically used to support special operations forces by providing close air support. The U.S. AC-130 gunship is one of the most feared weapons on the modern battlefield.

If China does replace its Y-8 fleet with the Y-20, it will put a plane in the air with a much larger payload, and much larger capabilities. The Y-20 also allegedly outperforms many other aircraft in its class, with Chinese reports claiming that—unlike Russia’s Il-76—the Y-20 can land at small airports and in mountainous areas.

It notes there are rumors that China may use the Y-20 to test its prototype airborne laser weapons, which are similar to the U.S. YAL-1 still under development. It says “a Chinese laser-armed airplane might be more like the American Tactical Laser, a C-130 laser gunship.”

A report from China’s National Defense University (NDU) called for China’s Xian Aircraft Corporation to develop 400 of the Y-20 heavy transports. It notes that the United States has 700 medium and large transport aircraft, Russia has 800, and India has 200. It also states, however, that development on the Y-20 is being held back by China’s poor engine development—a common problem China faces with current-generation military aircraft.