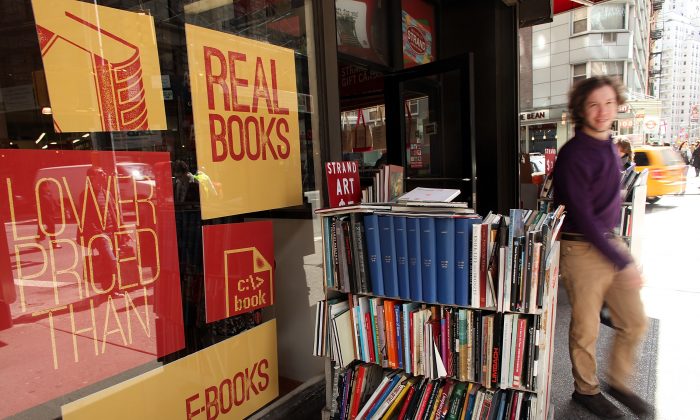 This Chrome App Is Trying to Save Indie Bookstores From Amazon

It’s no secret that independent bookstores are faring poorly. In England, their ranks have been thinned from 1,535 stores in 2005 to under a thousand just last year, a fall that many store owners attribute to the rise of e-sellers like Amazon.

One advantage that Amazon has over brick-and-mortar bookstores is that it doesn’t have to pay the overhead costs of renting out space and displaying the physical books.

Buyers can find what they’re looking for in the store and then buy it for a lower price online.

The practice, called showrooming, has been denounced by some authors as a form of theft. Now, a Chrome extension developer wants to turn the tables on Amazon and make the online bookstore a virtual showroom for its physical counterpart.

Once installed on Chrome, BookIndy overlays an additional buying option, “local bookstore,” on Amazon when you’re browsing for books that happen to be available from an independent bookstore nearby.

The extension works in collaboration with Hive, an independent online retailer, and hundreds of participating independent bookstores—for now, the app only works in England. It’s even offering free delivery for standard shipping (3–5 days) or 3 pounds ($4.75) for express (1–2 days).

It’s not clear what infrastructure BookIndy relies on to offer free shipping, which Amazon only offers on orders that are $25 dollars or more. It’s likely that, like other startup services, delivery is being subsidized to maximize growth.

Will Cookson, the creator of the app, said that he was motivated to build BookIndy after ruminating about how his own book-buying patterns, which had largely migrated to online stores in recent years, revealed a profound laziness in himself.

“I slipped into the convenience trap. I happily ordered my Ballards, my Murakamis, my Carvers from Amazon without giving much thought to my local independent bookshop, just 10 minutes from my home,” Cookson wrote on Medium. “I think we do care about local independent shops but we’ve turned into lazy, laptop-in-bed, impulse purchase type people, who crave convenience.”

Cookson realized that if indie bookstores were to rely on book-buyers overcoming their own lethargy, they were doomed. They had to adapt, to provide a service as seamless as Amazon. Thus BookIndy was born.

“If we are to buy from independent bookshops again, we’re not going to change our ways based on pangs of guilt or a sense of obligation,” Cookson wrote. “We demand something as convenient as Amazon. We demand something that gives us the choice of where to buy a book from with no extra effort.”

When Amazon Strikes Back

BookIndy is a novelty—it was launched late last month—and if it becomes successful, will almost certainly provoke a forceful response from Amazon, which has a history of playing hardball with its rivals.

Last year, when Amazon reached an impasse in negotiations over pricing with the book publisher Hachette, the e-commerce giant flexed its market power to browbeat the latter into submission, gradually making Hachette’s books unavailable on Amazon’s website. Hachette, itself part of a large conglomerate, held firm, and the dispute escalated into a nearly yearlong PR fight that ended in a draw.

Amazon defended its behavior, arguing that it was driving a hard bargain to obtain lower prices to pass saving onto consumers. Book publishers themselves have been criticized as an entrenched monopoly.

Less established companies aren’t so lucky. According to an anecdote in Brad Stone’s book “The Everything Store: Jeff Bezos and the Age of Amazon,” Amazon approached the founders of the delivery store Diapers.com about buying the website. When they hesitated to sell, Amazon launched a price war against them, automatically slashing prices on the same goods that Diaspers.com carried by as much as 30 percent despite losing $1 million dollars a day on the discounts. The website was eventually sold to Amazon.

It’s not difficult to imagine Amazon deploying similar tactics to quash BookIndy and Hive, steeply cutting prices that the app offers for delivery from indie bookstores. Or it could just go after Hive, flooding the market with the same titles the latter offers destroying the business infrastructure that BookIndy relies on.

If a price war does emerge, BookIndy will have to count on book-buyers—the same book-buyers who can’t be bothered to go to a bookstore 10 minutes from home—paying hefty premiums to survive, premiums that Amazon can widen to remarkable degrees.

Even in the absence of a price war, consumers will likely have to pay a premium on items purchased through BookIndy because of Amazon’s expertise in large-scale online delivery.

Not only does Amazon have deep pockets to finance drawn-out price wars, it has the deep trust of Wall Street that gives it even greater flexibility than other mature, multibillion-dollar companies.

Amazon’s profits have remained flat—near zero—for years, even as revenue has soared, because Jeff Bezo keeps pouring revenue into expanding the company rather than handing out dividends.

This arrangement gives Amazon considerably more freedom than its peers to forsake profit in the short term—and a greater arsenal to crush competitors.