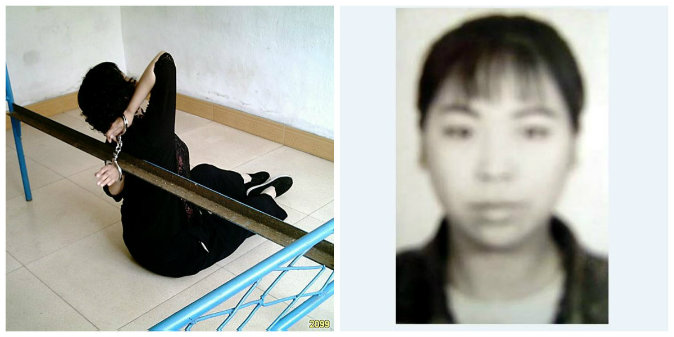 Wang Yuqing, of Qitaihe City in China’s northern province of Heilongjiang, tells how she was tortured in prison in China between 2003 and 2006. (Minghui.org)
China

For nearly three years, a Chinese woman withstood abuse and torture from prison guards and her fellow inmates for refusing to give up her faith.

Wang Yuqing, 43, of Qitaihe City in China’s northern province of Heilongjiang, was incarcerated at Heilongjiang Women’s Prison from September 2003 to March 2006, according to Minghui.org, a clearinghouse for information about the persecution of Falun Gong in China.

During this time, she was “handcuffed from behind, held in isolation, handcuffed and hung up, and tortured by other means,” according to an account by Wang that was only recently published to Minghui.

Wang was imprisoned for practicing Falun Gong, a traditional Chinese spiritual discipline that combines slow moving exercises with teachings of truthfulness, compassion, and tolerance. The practice has been persecuted since July 1999, when Chinese Communist Party leader Jiang Zemin ordered a sweeping suppression of it because he felt threatened by Falun Gong’s popularity. According to official figures, there were an estimated 70 million Falun Gong practitioners just before the persecution.

Soon after arriving in Heilongjiang Women’s Prison, Wang Yuqing was shocked to learn that inmates sometimes carried electric batons and were made to help the prison guards persecute Falun Gong practitioners. During one so-called “physical training session,” Wang and other practitioners were forced to run in circles under the watchful eyes of baton-wielding inmates. When the practitioners got tired and slowed down, the prison guards and other inmates would hurl batons, water bottles, and verbal insults in their direction.

Initially, Wang refused to put on prison uniform or answer roll call because she believed that she had committed no crime in keeping her faith. To make Wang renounce her belief, the prison guards handcuffed her right arm over her shoulder to a bed frame, and got other inmates to violently force on her prison uniform.

In another insistence, the prison guards handcuffed one of her hands to a lower bed frame, and the other hand to the higher bed frame of a bunk bed. In this position, Wang couldn’t sit, stand, or squat.

For seven months in 2004, Wang was made to occupy a tiny prison guard office with 30 other Falun Gong practitioners, and at least one practitioner was denied the use of the bathroom and had to relieve herself in that room.

Wang’s family members were allowed to visit her, but she was forbidden from telling them about how she was being mistreated in prison. “You will be denied family visits if you continue saying those things,” Wang recalled a prison guard telling her when she tried to inform her elder sister about her sufferings.

Most chillingly, the prison guards had at the end of 2004 instructed five inmates to forcibly pin Wang down so that they could draw her blood. Investigators of live organ harvesting allegations note that the Chinese authorities are known to draw blood from Falun Gong practitioners to build up an organ donation bank for transplant surgery.

According to Doctors Against Forced Organ Harvesting, a global humanitarian watchdog group based in Washington, D.C., the number of Falun Gong practitioners that have been subjected to forced organ harvesting is estimated to be more than 100,000.Wang Yuqing, of Qitaihe City in China’s northern province of Heilongjiang, tells how she was tortured in prison in China between 2003 and 2006.