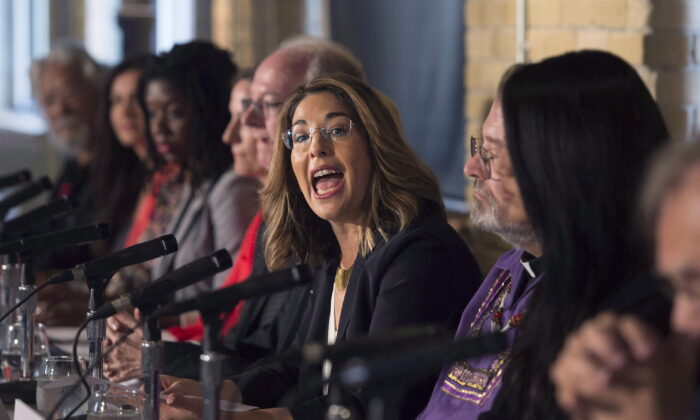 Naomi Klein, author of “This Changes Everything: Capitalism vs. the Climate,” joins other activists, actors, and musicians in launching the Leap Manifesto, outlining a climate and economic vision for Canada, during a press conference in Toronto on Sept. 15, 2015. (THE CANADIAN PRESS/Darren Calabrese)
Viewpoints

‘This Changes Everything,’ But Not for the Better!

But in the revolutionary spirit of the 1960s, environmental activists transcended the practical dimensions of traditional conservationism. Rachel Carson’s book “Silent Spring,” on the effects of pesticides, kick-started the engines of human welfare ecology, leading to intense interest in an infinity of issues: carcinogens, acid rain, overpopulation, solid waste disposal, nuclear radiation, and so on. It also began to shift the environmentalist movement into the realm of political ideology.

This migration of the movement into political territory resulted in the development of environmental legislation, the creation of government departments of the environment, the growth of regulatory processes, lengthy impact studies and public hearings on energy projects, a higher public profile for environmental activists, and the founding of “green” political parties in western democracies.

At the turn of the 21st century, the positing of the infamous “hockey stick graph” by Penn State climatologist Michael E. Mann, and the production of the Oscar-winning film “An Inconvenient Truth” by former Democratic presidential candidate Al Gore, led to an all-consuming preoccupation with “global warming.” Since then, a contagion of climate alarmism has reached global proportions. By 2019, some 195 states have signed on to the international Paris Agreement to significantly reduce greenhouse gas emissions and fight climate change.

But contrary to the assertions of Mann and legions of impressionable schoolteachers around the world, the alleged scientific consensus on the perils of global warming has not gone unchallenged. For example, in 2005, Canadian researchers Steve McIntyre and Ross McKitrick expressed credible doubts about the principle component analysis in the hockey stick graph. In 2015, widely respected international author Mark Steyn published “A Disgrace to the Profession,” compiling the views of over 100 world-class scientists who were critical of Mann’s research methods and the hysteria that developed around the issue of climate change.

The fact is, none of the sweeping climate predictions that have been made since the 1970s have come true—no new ice age, no steady warming in direct relation with increases in CO2 levels, no disappearance of polar ice caps, no exceptional rise in ocean levels, no abnormal increase in catastrophic weather events, no widespread crop failure and famines.

Writing in the National Post, author and columnist Conrad Black said, “Climate change, to use a phrase of Napoleon’s, has entered the realm of ‘lies agreed upon.’” He went on to suggest: “Anyone who claims certainty on this subject is a charlatan. Historians of the future will wonder how Western Europe and Canada became so preoccupied with this issue.”

The interventions of practical conservationists were framed by classical and reform liberal traditions. The former sought rational, market-based solutions. The latter called for more government regulation to mitigate third-party costs and damage to the natural environment. Neither approach called for the end of capitalism.

Today, as Black argues: “The international left, defeated in the Cold War and domestically by such leaders as Margaret Thatcher and Ronald Reagan, seized upon the environment as a fruitful vantage point from which to continue their assault on capitalism while masquerading as conscientious earth people.”

The rollout of Naomi Klein’s 2014 book, “This Changes Everything: Capitalism vs. the Climate,” along with the ensuing myriad of films, public meetings, classroom lesson plans, and demonstrations, set the scene for the same kind of cultural conflict that played out in the pages of Depression-era novels by the iconic American communist writer John Steinbeck.

“Forget everything you think you know about global warming,” said a New York Times review of Klein’s book. “The really inconvenient truth is that it’s not about carbon—it’s about capitalism. The convenient truth is that we can seize this existential crisis to transform our failed economic system and build something radically better.”

In other words, climate activists are now calling for a fundamental transformation of our economic system from capitalism to socialism. This is a troubling development within what used to be a movement that introduced sensible measures to preserve nature and maximize human welfare.

History has clearly demonstrated that replacing free-market principles with socialist planning does not lead to general prosperity and well-being. On the contrary, it leads to drops in investment rates and capital formation, which in turn lead to rising costs for producers, contractors, and consumers.

Nationalizing and over-regulating the delivery of services and the means of production produce waste, inefficiency, shortages, corruption, and an inevitable decline in the general standard of living. It may also lead to further environmental degradation. Two of the planets largest producers of greenhouse gases and other pollutants are socialist India and communist China. Capitalist America has one of the cleanest environmental records in the world.

Only capitalist economies have been sufficiently productive to raise millions of people out of poverty and provide a wide array of social, health, and educational services to vulnerable members of society. Socialism, over the same period of time, has failed to deliver on promises of equality, security, prosperity, and peace in just about every part of the world in which it has taken root.

Unfortunately, the left’s dominance over our institutions of cultural formation has left young people with no historical perspective from which to recognize ideological motives and to judge unintended consequences. So, if this changes everything, it certainly doesn’t look like change for the better.

William Brooks
Follow
William Brooks is a Canadian writer who contributes to The Epoch Times from Halifax, Nova Scotia. He is a Senior Fellow with the Frontier Centre for Public Policy.