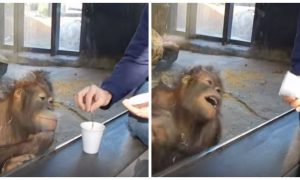 This Baby Orangutan Was Shot and Abandoned (Video)

Keeping orangutans as pets is outlawed, but that didn’t stop hunters in West Borneo from trying to take one from the wild. It is believed that in the process, they shot and killed the young animal’s mother. Also likely is that when they learned they’d fired a bullet into the baby’s shoulder as well, they abandoned him.

Last week, the International Animal Rescue, or IAR, received word that the small orangutan was found in dire condition, and the group has been caring for him since. The baby, who has been named Didik, is so weakened by malnutrition and infection he is unable to consume food normally. Caretakers have been using a syringe to feed him, and over the past days he has begun to show small signs of improvement.

According to the IAR, Didik is on the road to physical recovery, but the trauma from watching his mother die could endure for years. The organization is requesting donations to help cover the cost of his continued care.