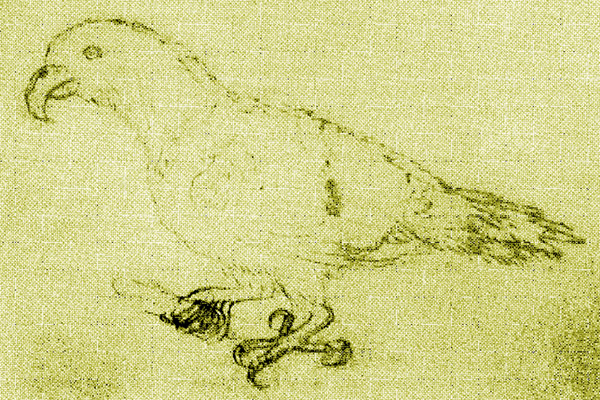 The only believed drawing of an Oceanic parrot (Eclectus infectus) from life made in 1793 in Tonga. Illustration by: Unknown.
Animals

In a recent update of the IUCN Red List, scientists have identified 13 new bird species that have gone extinct since 1500. In total the list now finds that at least 140 bird species gone extinct in the past five hundred years, representing 1.3 percent of the world’s total known birds.

The new extinct birds were added to the list for a number of reasons. Seven of the 13 were due to recent discoveries of fossil birds on Bermuda, Mauritius, Rodrigues, and Tonga. Four were due to taxonomists splitting species that were considered subspecies prior to this update. Finally, two of the extinct birds—Finsch’s duck (Chenonetta finschi) and Hodgen’s waterhen (Tribonyx hodgenorum)—were found to have survived longer than previously believed, making them eligible for the IUCN Red List data. The IUCN Red List only tracks species that were present on the planet as of 1500 AD.

All of the newly-added extinct birds were island birds that were decimated by overhunting and invasive species, such as rats. While most of the now recognized species went extinct over a hundred years ago (and many longer), the South Island snipe (Coenocorypha iredalei) from New Zealand survived until 1964 went its last two endlings died in captivity.

The new update also named three additional species as possibly extinct. The New Caledonian buttonquail (Turnix novaecaledoniae) has not been seen in over a century, but may still survive on the island. Another bird from hugely important biodiversity hotspot may also be extinct: the New Caledonian nightjar (Eurostopodus exul). This species was only recorded once in 1939—and hasn’t been seen since. Unlike the others, the last species is a mainland species. Once found in Colombia, the Sinu Parakeet (Pyrrhura subandina), hasn’t been seen since 1949. For these three species, in-depth surveys are needed to determine if they are extinct or survive in small populations.

One additional species was also listed as Extinct in the Wild in the new update: the Guam kingfisher (Todiramphus cinnamominus). After being decimated by invasive snakes, biologists took the last remaining Guam kingfishers off the island in 1986. Today, 124 of these birds are found in zoos across the U.S.

As one of the world’s most studied animal groups—100 percent of birds have been evaluated by the IUCN Red List—bird losses are further evidence that the world has entered a mass extinction crisis due to ongoing human impacts, including deforestation, habitat destruction, invasive species, overexploitation, and, increasingly, climate change and ocean acidification. Scientists warn that if large-scale action isn’t taken to protect biodiversity hotspots and counter environmental threats, the Earth could see a mass extinction event to rival the comet that killed the dinosaurs.