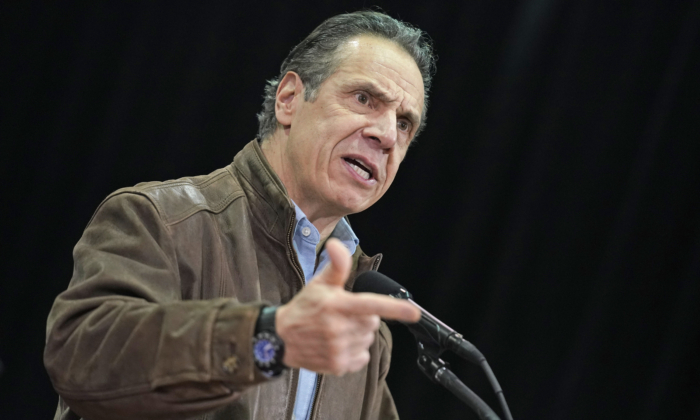 New York Gov. Andrew Cuomo speaks during a press conference before the opening of a mass COVID-19 vaccination site in the Queens borough of New York on Feb. 24, 2021. (Seth Wenig/POOL/AFP via Getty Images)
NY News

A third woman has come forward with harassment allegations against New York Gov. Andrew Cuomo, as calls for the Democrat’s resignation continue to grow.

Anna Ruch, 33, told The New York Times late Monday that she and the governor met at a wedding in September 2019, where he made unwanted advances toward her. She alleged that he placed his hand on her bare lower back, called her “aggressive” when she promptly removed it, and then put his hands on her face and asked if he could kiss her.

“I was so confused and shocked and embarrassed,” Ruch told The New York Times. “I turned my head away and didn’t have words in that moment.”

The news outlet published a photograph of the incident showing both of the governor’s hands on her neck and face.

Ruch’s account follows allegations from two of Cuomo’s former aides in recent days. Both Lindsey Boylan, the former deputy secretary for economic development and special adviser to Cuomo, and Charlotte Bennett, another former aide to the governor, have accused Cuomo of sexual harassment.

Boylan, a Democrat running for the post of Manhattan borough president, in a post published last week, accused Cuomo of making inappropriate remarks, and allegedly touching and kissing her without consent. She said he would go out of his way to “touch me on my lower back, arms, and legs,” compare her to one of his rumored former girlfriends, and once suggested that they should “play strip poker” on a flight from an event in October 2017.

“I understood that the governor wanted to sleep with me, and felt horribly uncomfortable and scared,” Bennett told The New York Times. “And was wondering how I was going to get out of it and assumed it was the end of my job.”

Ruch told The New York Times that she was left feeling uneasy after Cuomo touched her back.

“I promptly removed his hand with my hand, which I would have thought was a clear enough indicator that I was not wanting him to touch me,” she said.

“I felt so uncomfortable and embarrassed when really he is the one who should have been embarrassed,” she added, recalling the moment the governor placed his hands on her cheeks.

That particular encounter was captured in several photographs by a friend on Ruch’s cellphone.

“It was when my friend looked at me and said, ‘Are you OK?’ with such genuine concern in her face that I realized how obviously inappropriate it was,” Ruch added, “not only to me but to those around me as well.”

“The pattern of sexual harassment and predatory behavior by Governor Cuomo is unacceptable, and I believe the women coming forward,” New York City Councilman Antonio Reynoso said on Twitter.

Bennett’s account of “Cuomo’s sickening workplace sexual harassment and grooming” is “so horrific it makes your skin crawl,” she said in a statement.

Cuomo’s office has denied the allegations from both Boylan and Bennett. In a statement on Feb. 28, he acknowledged that some of his interactions with women “may have been insensitive or too personal.”

The statement maintained that Cuomo has “never inappropriately touched anybody” and said his office would cooperate with an investigation.

“The state’s Executive Law clearly gives my office the authority to investigate this matter once the governor provides a referral,” James, a Democrat, said.

On Monday, James said she was launching the probe after Cuomo’s office sent her the referral.

“His inappropriate and aggressive behavior cannot be justified or normalized. Thank you for your courage and strength,” Bennett wrote.

“I feel nauseous thinking about Anna’s experience,” Boylan wrote on Twitter. “I am sending her love and light. Charlotte and I are with you, Anna.”