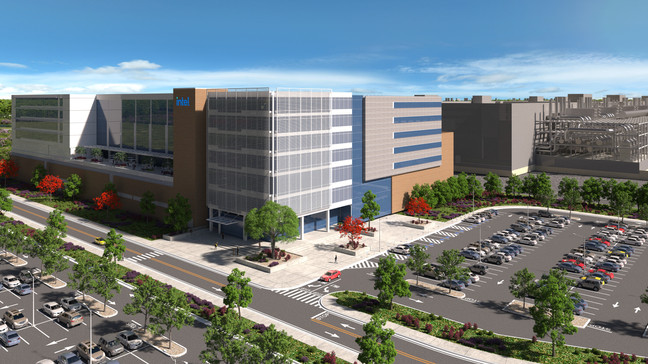 Intel and Ohio Gov. Mike DeWine announced on Jan. 21 that the semiconductor maker is planning two plants outside of Columbus. The $20 billion project will cover 1,000 acres in New Albany, replacing farm land that produced corn and soybeans. (Courtesy of Intel)
US Features

New Albany, a city in rural Ohio, is set to become home to the largest private investment in state history—a development that could change the face of a neighboring agricultural township forever.

During a festive press conference on Jan. 21, Ohio Gov. Mike DeWine and Intel CEO Pat Gelsinger announced plans for two $20 billion microchip plants that will cover 1,000 acres in the city of New Albany in Licking County.

Intel plans to break ground later this year for the facilities, which will employ 3,000 people and create 7,000 construction jobs.

The first factory is projected to be completed in 2025.

Supply chain issues stemming from workforce shortages and the effects of the pandemic have caused drastic semiconductor shortages across the United States and the world in recent months.

Intel selected Ohio for the plants because it has 60 percent of the U.S. population within one day’s drive, the universities and colleges to draw talent from, and the business-friendly environment.

Most of the property where the company plans to build is on a prominent farm in neighboring Jersey Township that New Albany has recently received an annexing application for.

Part of the nearby land included in the project is residential, a spokesman for the city told The Epoch Times on Jan. 25.

New Albany is among the rapid growth areas in the suburbs of large cities in Ohio that are in close proximity to interstate highways, and businesses that rely on essential products.

The property for the Intel project is in western Licking County in an area that New Albany is considering annexing from Jersey Township.

The annexation petition has been submitted to the city by a single applicant—the New Albany Co. The company is also working with the property owners who plan to sell land or could be affected by the Intel project, a city spokesman told The Epoch Times.

The majority of the project would be on property owned by Heimerl Farms, a third-generation family farming operation owned by Jim and Kathy Heimerl, Jersey Township trustee Ben Pieper told The Epoch Times.

Heimerl Farms has been in business since the 1940s. It has many swine operations and raises Holstein cattle, plus farms several thousand acres. Heimerl also has contract barns in Michigan and Indiana, according to its website.

Brad Heimerl, one of Jim Heimerl’s sons who led the Heimerl Farms hog operations division, confirmed to The Epoch Times that the family’s property is part of the annexing application for Intel. He declined to say how many acres of Heimerl Farms would be sold to Intel.

“It’s never a great thing when you lose some farmland, because we’re not getting any more of it,” he said. “This project will change a lot of lives in the area.”

Pieper said Intel’s project is so big that local residents are having a “hard time comprehending what is going on.”

“This whole area is going to change,” said Pieper, who is a lifelong resident of Jersey Township. “It won’t be rural anymore. There’s really nothing out here.

“This project is so massive, we can’t comprehend it. We just don’t know what it’s going to do to the area.”

Pieper owns a truck garage and Precision Tactical, a gun shop in the township that makes custom firearms. He said he also farms the basics: soybeans and grain.

“We didn’t know it was Intel until they announced it,” Pieper said. “They don’t tell us much.

“It’s been a hush-hush operation. Heimerl Farms really doesn’t talk much about what they’re doing, and it’s really not any of my business. Ya know?

“It’s probably a good thing,” he said of the Intel project. “It’s good for the country, the state, and the town. We just don’t know what it’s going to mean for us yet. We’ll just have to wait and see. I don’t want it in my backyard, but it has to go someplace.”

The New Albany Co. was co-founded by Les Wexner, the wealthiest man in Ohio, and John “Jack” Kessler, who is the company’s chairman, according to its website. On the website, Kessler is listed as one of central Ohio’s most accomplished real estate developers and influential civic leaders.

The developer of numerous residential communities across the country, Kessler and Wexner were among New Albany’s first residents.

Ohio is said to have been selected because of its friendlier business environment, looser regulatory provisions, and being closer to suppliers.

With workers at the Intel plants expected to earn an average of $135,000 per year, they also benefit from the cheaper cost of living in Ohio.

“This will be a very good thing,” DeWine spokesman Dan Tierney said.

Tierney said that details of the tax incentives or abatements through the Department of Development that also enticed Intel to select Ohio will be released in the near future. The company had 40 other states bidding for the project.

Local workers and residents living in the area have a positive vibe about the project.

Jason Stanley, general manager at the Rusty Bucket Restaurant and Tavern, said he has seen a lot of changes in the 5 1/2 years he’s been at the New Albany location.

“As far as the Intel project helping our restaurant, that depends on where the workers are going to live,” Stanley said. “It’s been nice living in an area that’s busy for businesses.”

During the press conference, Gelsinger and DeWine reiterated that the company’s investment sends a message to China other Asian markets that essential products will be manufactured in the United  States and that more materials need to be manufactured here.

Gelsinger said that over the next decade, Intel plans to invest an additional $100 million to partner with universities and colleges throughout the region to recruit talent and for research programs.

DeWine said microchips simply are “the brains that power everything in our future”—cell phones, cars, farming combines, electronics, artificial intelligence, and tools to bolster national security.

In a statement, New Albany Mayor Sloan Spalding said the city is prepared for the development.

“This is a big win for our nation and our state, and locally, it’s important to note that we are ready for this project,” Spalding said. “New Albany is a strategically-planned community and this project fits within the parameters of our business park, where 16,000 people already work.

“We’ve been planning roads and other critical infrastructure for years and with assistance from our other project partners we will ensure that the infrastructure for this project will be in place in a way that supports our entire community.”

That is evidenced in part by the hundreds of Ford heavy-duty trucks—manufactured at the Ohio Assembly Plant in Avon Lake along Lake Erie near Cleveland—sitting idle in parking lots throughout Lorain County because they don’t have microchips inside them to motor down the highway.