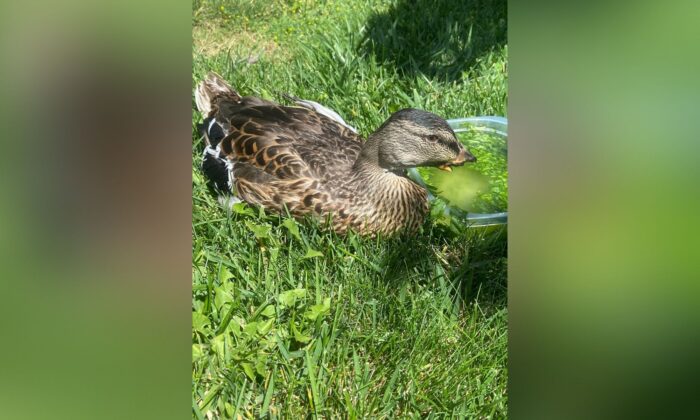 A third duck with its bill severed was found in Mile Square Park in Fountain Valley, Calif., on June 14, 2022. (Courtesy of Wetlands and Wildlife Care Center of Orange County)
Southern California OC News

Third Duck Found in Fountain Valley With Bill Cut Off

The injured duck was originally found “suffering from starvation” in the park the night of June 14 by a center volunteer who was walking in the area, said Debbie McGuire, the care center’s executive director.

“She brought it home with her overnight since WWCC was closed,” McGuire said. “The duck passed away during the night at her home.”

The agency reported the duck was likely the first in a string of similar mutilations at the park.

One duck was found with its bill severed on July 31, and another was found with similar injuries on Aug. 13, McGuire said. The ducks were alive, but starving because they could no longer eat and were euthanized because of their wounds.

The California Department of Fish and Wildlife and Orange County Animal Control are investigating, McGuire said.

If anyone sees a duck being attacked in the park they are encouraged to call 911. Anyone who has information helpful to investigators was asked to call CalTip at 888-334-2258. If an injured bird is found call animal care at 714-935-6848.

Donations to help the care center treat injured ducks can be made at the nonprofit organization’s website.