VANCOUVER, Canada—Huawei’s CFO Meng Wanzhou has been granted bail after her three-day bail hearing concluded on Dec. 11 in a Vancouver court.

In his decision, the judge said that Meng is a “well-educated businesswoman with no criminal records.” He said he is satisfied that Meng has only two valid passports, and that she will surrender all her other ones.

After the judge’s decision, with tears in her eyes, Meng hugged her lawyer and also turned around to smile at her husband sitting in the front row of the audience.

Some of Meng’s bail conditions include:

The hearing couldn’t conclude on Dec. 10 over questions on whether Meng’s husband Liu Xiaozong could be her surety.

A surety is someone who supervises an accused person while they are out on bail. They also pledge bail money. Through Meng’s lawyer, Liu, who is in Canada on a visitor visa, has said he is willing to remain in Canada with Meng, as well as pledge both his houses and a cash deposit. However, the judge said on Dec. 10 that he still has questions about whether a non-resident of the province can be a surety for bail.

Meng’s lawyer David Martin argued that there is a precedent to accept a non-resident of the province to act as surety if there are multiple sureties. The others who Martin introduced to act as sureties are:

Martin said there are a number of options for Liu to legally extend his visa and what Liu will have to prove, either when re-entering Canada or applying for a visa extension, is that he has a legitimate reason to stay in Canada.

Meng, dressed in green prison sweats, had a smile on her face and appeared relaxed at the start of today’s hearing. As the hearing progressed, Meng sat straight and listened silently to her interpreter.

The lawyer representing the attorney general of Canada, John Gibb-Carsley, opposes Meng’s release and said that Liu should be excluded from acting as surety.

He argued that Liu would not be able to properly take on the role of Meng’s supervisor as their “interests are too aligned.” He said if Meng chose to flee, Liu would likely go with her, and that any loss that Liu would suffer would be compensated by Meng, as “his assets are her assets.”

Gibb-Carsley also said that whether Liu is able to stay in Canada or not is up to immigration and border officials, and his visa extension request could be rejected.

Meng was arrested in Canada on behalf of U.S. authorities and faces extradition to the United States. She is charged with conspiracy to defraud multiple financial institutions, with each of the offenses she is charged with carrying a maximum prison sentence of 30 years. Meng denies the charges.

U.S. authorities allege that Meng lied to U.S. banks about Huawei’s relationship with Hong Kong-based telecom company Skycom, which reportedly attempted to do business with Iran. This caused banks to unknowingly breach U.S. sanctions when they cleared transactions for Huawei.

The judge has said that, based on his own experience as well as past cases, an extradition hearing could take months to complete. 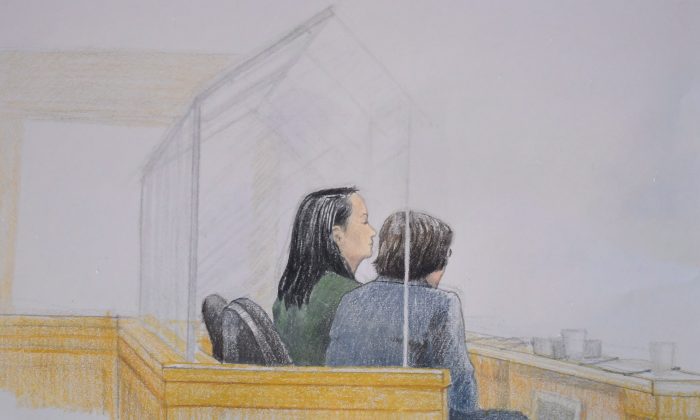