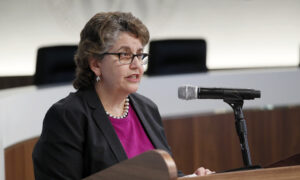 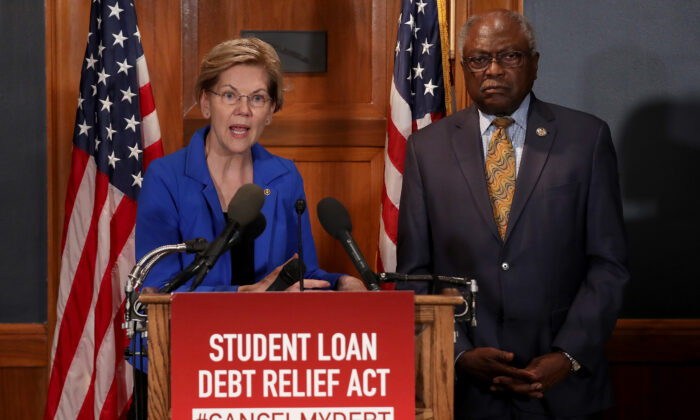 WASHINGTON—Sen. Elizabeth Warren (D-Mass.) would end the college loan “crisis” by forgiving $1.25 trillion in such debt and then making college tuition-free, but a new study casts doubt that such a program is even needed.

Warren claims that the crisis is so great that it’s “crushing millions of families and acting as an anchor on our economy. It’s reducing home ownership rates. It’s leading fewer people to start businesses. It’s forcing students to drop out of school before getting a degree. It’s a problem for all of us.”

Sen. Bernie Sanders (I-Vt.) and most of the other candidates in the huge field of Democrats hoping to be the one to challenge President Donald Trump in 2020 have also offered plans to deal with the college loan crisis.

But Manhattan Institute senior fellow Beth Akers said in a study made public on Oct. 10, “Millennials aren’t drowning in student debt.” Data from the U.S. Census Bureau and the Department of Education show Warren, Sanders, and others claiming a college loan crisis are misrepresenting reality.

“Sixty-six percent of millennials have no student debt at all. That’s because they haven’t gone to college or because they managed to get through without having to borrow,” Akers wrote.

“Those who do have debt tend to have modest burdens relative to their income. Typical four-year-degree graduates who borrow will accumulate $28,500 in debt over the course of their enrollment,” she said.

According to Akers’s calculation, the $28,500 can be repaid at a monthly cost of less $200, which represents only 4 percent of the average monthly earnings for such individuals.

The biggest chunks of the current college loan debt are held by higher-income people with graduate level and professional degrees, Akers pointed out.

“In 2017, the average annual income for millennials with master’s and professional degrees was $74,480 and $89,006, respectively. That makes larger loan payments feasible—while still leaving much more discretionary income as well,” she wrote.

There are already federal programs that provide a safety net for borrowers who get in over their heads. Those programs allow lower monthly payments and forgiveness of truly unaffordable debts.

“A borrower with $75,000 in annual income can opt to reduce his monthly payment to $414 without penalty. Making reduced payments can cause a large balance to grow, but borrowers in repaying their debt in the programs that allow reduced monthly payments will ultimately have their debt forgiven after making payments for 20 years,” Akers observed.

Akers further estimated that existing safety-net programs are projected to cost more than $74 billion “to discharge existing debts deemed unaffordable by current rules, and the benefits will disproportionately accrue to people with graduate and professional degrees.”

Contrary to what might be expected, the Manhattan Institute scholar wrote, students from higher-income families tend to take on greater debt because they attend more expensive schools and remain in class longer.

The first prong is intended to “level the playing field and provide more options for career training” by making “more job-training and certification programs, like employer-based apprenticeships and digital boot camps, eligible to receive Pell Grants through an alternative accreditation process.”

The second prong “requires colleges and universities to pay off 50 percent of the balance of student loans accrued while attending their institution for students who default.” The bill also bars schools “from increasing the cost of attendance to offset their liability.”

Sen. Chuck Grassley (R-Iowa) has introduced a bill that requires colleges to make the actual costs of financial aid clear.