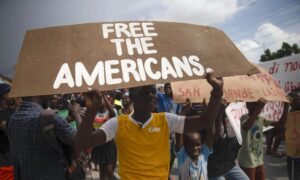 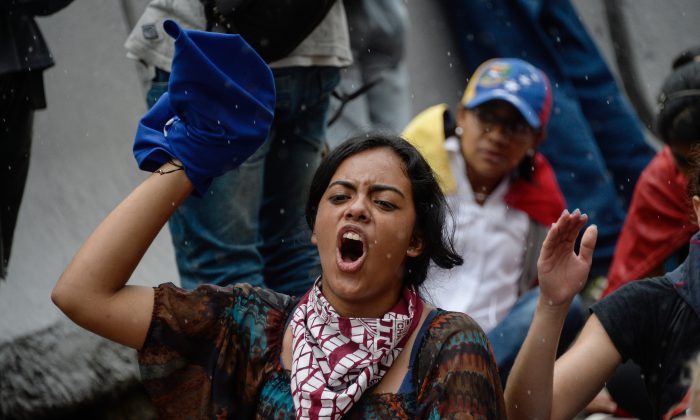 Opposition activists protest against the government in Caracas, Venezuela, on May 12. (FEDERICO PARRA/AFP/Getty Images)
Americas

The socialist regime in Venezuela has generated the largest mass exodus in Latin American history, and a prominent think tank in Washington, DC, says the time for talk is over.

The nonpartisan Center for Security Policy (CSP) issued a statement on October 4 backing U.S. support for “Venezuelans to take their country back by themselves” from ruler Nicolás Maduro. CSP recommends the United States provide arms and training to worthy Venezuelans, but “not start another war of choice.”

The CSP—which leans neoconservative and is led by Reagan administration alumnus Frank Gaffney—believes the Venezuelan regime promotes “regional subversion and destabilization.” Therefore, CSP staffers contend that US cooperation with regional allies to provide the help that Venezuelans need to solve the problem could generate mutual benefit.

The military aid from the United States could be accompanied by complementary “forms of support from friendly countries.” For example, Venezuela’s neighbors—notably Colombia and Brazil—could permit the Venezuelan resistance force to install safe bases and logistics centers in their territories. The CSP also suggests taking “appropriate measures against any government or group that opposes the effort.”

In Line with Trump Administration?

President Donald Trump’s September 25 speech to the U.N. General Assembly motivated the CSP to release this decision brief. Trump and Nikki Haley, the U.S. ambassador for the United Nations, called for the restoration of democracy in the South American country and encouraged the Venezuelan opposition to defend their liberties and security.

Further, the CSP argues that its proposal “is consistent with President Trump’s national security strategy and policy.” The organization has spoken favorably of the administration’s policies and shared ideals, dating back to when he took office in January 2017.

The plan to provide “arms, equipment, training, intelligence, and logistical support” falls short of an outright invasion, while at the same time it seeks a solution to the glaring refugee crisis. Instead of fleeing their homeland in search of opportunities throughout the continent, the CSP believes locals should confront the Marxist regime initiated by the late President Hugo Chávez, in office from 1999 to 2013.

Creating programs to provide for the many Venezuelan migrants is not appropriate, according to the CSP, when it does nothing to eradicate the source of the infection. Beyond the Venezuela’s domestic crisis, the CSP adds, the regime has problematic relationships with the communist regimes of Cuba, China, Iran, and Russia, and it “hosts jihadists and their terrorist groups, like Hezbollah.”

The CSP wants to “narrowly limit any U.S. military action to special operations” against foreign actors in Venezuela, along with limited defense or safe haven for the Venezuelan resistance force.

The CSP statement highlights that soft-power alternatives have proved fruitless. The Organization of American States (OAS), for instance, has fallen short with criticism but no solutions. Luis Almagro, the OAS secretary general and a former socialist politician, has not even attained a sufficient member votes to apply the democratic charter and suspend Venezuela from the OAS.

U.S. military intervention has already become a matter of public debate within the political sphere.

For example, Florida Republican Senator Marco Rubio, who is a close adviser of Trump on Latin American issues, believes Venezuela’s panorama is threatening U.S. and regional security. For Rubio, this is a “very strong argument” for the United States to intervene in Venezuela and fight against the authoritarian regime.

However, Shannon O’Neil, a senior fellow for Latin America Studies at the Council on Foreign Relations, opines that a U.S. military intervention is not the best way to achieve political change in Venezuela. Her concern is the large scope of the country: “Venezuela isn’t Grenada or Panama, the two Latin American countries invaded by the US during the closing days of the Cold War.”

Political and security consultant James Bosworth is most concerned that the United States not act alone: “All of the major countries of the hemisphere, particularly Venezuela’s immediate neighbors, need to coordinate and come to an agreement on an appropriate response today and if and how to escalate that response if necessary in the future.”

Likewise, Colombian President Iván Duque has shared his opposition towards any unilateral military intervention. His present belief is that Latin Americans do not support a military confrontation with the Chavistas in Venezuela.

Duque believes that the most suitable strategy is to isolate the Maduro regime in diplomatic affairs. However, Duque and Trump will hold a meeting in November and will likely discuss how to address this regional concern.

Brazil is in the midst of presidential elections, awaiting the runoff, so the foreign-policy inclinations for the coming years could go either way. However, Brazilian Minister of Defense Joaquim Silva e Luna dismissed the notion that his country would back a military intervention in Venezuela.

Argentine historian Carlos Sabino, who lived in Venezuela for many years, believes that a military intervention could bring new and more severe problems to Venezuela, although it “should not be ruled out.” The authoritarian regime that has already turned Venezuela into “a devastated country as if it had suffered a war,” would likely seize on this event “to justify its dictatorship.”

Sabino’s fear is that the Venezuelan regime would appeal to its usual nationalist and “anti-imperialist” rhetoric. U.S. intervention would in their minds prove that their socialist policies were right: “It would be a golden opportunity for Maduro and his cronies to gain the prestige and legitimity that they don’t have today.”