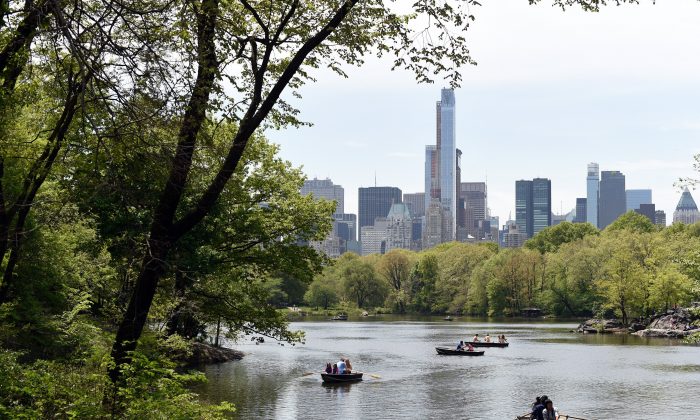 With a section of the Manhattan skyline in the background, people row around the lake in Central Park May 12, 2014, in New York, taking advantage of the warm weather. (TIMOTHY A. CLARY/AFP/Getty Images)
New York

Things to Do Around NYC: September 30–October 6

IAWA Features: Embroidered Stories from the Italian Diaspora
Oct. 8 at 5:30 p.m.
Sidewalk Café at 94 Ave. A
Edited by Edvige Giunta and Joseph Sciorra, “Embroidered Stories” is a collection of work that interprets Italian women’s needlework, a cultural touchstone as powerful as pasta and Neapolitan music. The collection is an interdisciplinary collection of creative work by 37 authors ranging from meolire, poetry and visula arts. Joining them will be three contributors: Paola Corso, Joanna Clapps Herman, and Marisa Frasca. $8. SidewalkNY.com.

Margaret Mead Film Festival
Oct. 13–16
American Museum of Natural History
This year’s festival includes 45 films featuring issues and cultures across the globe; dialogues that allow audiences to engage with artists and scholars; and nstallations and interactive events that complement the extraordinary slate of films. The theme “Re:Frame” invites viewers to probe their own perspectives and to celebrate stories and art forms that offer us opportunities to see the world anew. $12–$45. amnh.org

Kiku: Celebrating the Art of the Japanese Garden
Oct. 8–30
New York Botanical Garden
The chrysanthemum, kiku in Japanese, is the most celebrated of all Japanese fall-flowering plants. Enjoy a stunning exhibition of these carefully trained flowers in the Haupt Conservatory. NYBG.org

The Battle of Brooklyn
Sept. 23–Jan. 8
New York Historical Society, 170 Central Park West
On Aug. 27, 1776, on the marshy fields of Gowanus and Red Hook, George Washington and his rag-tag army of untrained soldiers fought the Royal Army, one of the most powerful military forces in the world. NYHistory.org

Valentin de Boulogne: Beyond Caravaggio
Oct. 7–Jan. 16
Gallery 999 at The Met Fifth Avenue
This will be the first monographic exhibition devoted to Valentin, who is little known because his career was short-lived—he died at age 41—and his works are so rare. Around 60 paintings by Valentin survive, and this exhibition will bring together 45 of them, with works coming from Rome, Vienna, Munich, Madrid, London, and Paris. $12–$25 suggested. METMuseum.org

Lost in Old New York
Through Oct. 1
Museum of the City of New York
The Museum of the City of New York is offering museumgoers a chance to travel back to the 19th and 20th centuries with Lost In Old New York , an interactive installation of eight classic images of to the city’s most iconic locations. From the beaches of Staten and Coney Islands and the old Penn Station to the 1939 World’s Fair, Lost In Old New York celebrates the places that, for well over a century, helped New York become a world-class city. MCNY.org

Watteau’s Soldiers: Scenes of Military Life in 18th Century France
Through Oct. 2
The Frick Collection
Most know Jean-Antoine Watteau as a painter of amorous aristocrats and melancholy actors, a dreamer of exquisite parklands and impossibly refined fêtes. Few artists would seem further removed from the misery of war. And yet, early in his short career, Watteau created a number of military scenes—about a dozen paintings and some thirty drawings. Frick.org

Kogei: Contemporary Japanese Art
Through Oct. 8
Onishi Gallery, 521 W. 26th St.
Even more than a display of the exquisite artistry of over 30 Japanese contemporary artists, this exhibition introduces into the international art market “Kogei”—a category of art object translated from Japanese as “Art Crafts.” This category of “Art Crafts” has specific qualifications, and refers to a class of artistic creations produced with advanced technical skill and refined design aesthetics. OnishiGallery.com

Masterpieces of Chinese Painting
Through Oct. 11
Metropolitan Museum of Art
Over the last forty years, the Metropolitan’s collection of Chinese painting and calligraphy has grown to be one of the greatest in the world. Replete with masterpieces dating from the Tang dynasty (608–917) to the present, the collection encompasses the vast historical sweep of the brush arts of China, from serene Buddhist scriptures to bombastic court portraits to lyrical scholars’ paintings. This exhibition, presented in two rotations, will highlight the gems of the permanent collection in a chronological display, with an emphasis on works from the Song (960–1279) and Yuan (1271–1368) dynasties. $12–$25 suggested. METMuseum.org

Tristan und Isolde
Sept. 26–Oct. 27
Metropolitan Opera
“Tristan und Isolde” opens the Met season in a new production by Mariusz Trelinski (the director responsible for the 2014–15 season’s double bill of Iolanta and Bluebeard’s Castle), and will be well served by a cast of outstanding Wagnerians: Nina Stemme as Isolde, Stuart Skelton as Tristan, Ekaterina Gubanova as Brangäne, and René Pape as King Marke, with Sir Simon Rattle conducting, in one of his rare appearances at the Met. From $27. MetOpera.org

NYTB: Carnival of the Animals
Oct. 1,3 p.m.
Schimmel Center, 3 Spruce St.
In a magical forest, Queen Diana and her shaggy lion rule a charming assortment of animals who live more or less peaceably until a pair of lost children wander in, and then the fun begins! $10 children, $20 adults. SchimmelCenter.org

L’Italiana in Algeri
Oct. 4–29
Metropolitan Opera
James Levine conducts this comedy of a feisty Italian girl turning the tables on her bumbling captors via Rossini’s blend of madness and fun. Mezzo-soprano Elizabeth DeShong is poised to conquer the title role, opposite tenor René Barbera and baritone Nicola Alaimo. Bass-baritone Ildar Abdrazakov plays the pasha who is overcome by love and pasta. From $25. MetOpera.org

Classic New York City Ballet
Oct. 7, 8, 12
David H. Koch Theater
A program of passion and high-spirits, the transcendent lift of Serenade and the brash humor of the Wild West bookend a recent premiere to George Gershwin’s beloved, jazz-inflected concerto and a world-famous showpiece known for its balance of romantic lyricism and virtuosic surprise. $30–$175. NYCBallet.com

Mark Schultz: An Evening of Stories and Song
Oct. 5, 7:30 p.m.
Schimmel Center, 3 Spruce St.
Join Dove Award winner Mark Schultz for an intimate evening of inspirational stories and song. Selling over 1 million albums and with 10, 1 songs Mark Schultz is a powerful performer not to be missed. $29, and $49 meet-and-greet. SchimmelCenter.org

All Nite Soul 2016
Oct. 9, 5 p.m.
Saint Peter’s Church, 619 Lexington Ave. (at 54th Street)
The first All Nite Soul was held in 1970 to commemorate the fifth anniversary of Jazz Vespers at Saint Peter’s. It is now the longest-running jazz festival in New York City, featuring hours of the best jazz in the world every October. This year, The Jazz Ministry of Saint Peter’s Church is partnering with WE ACT for Environmental Justice to call attention to environmental issues impacting quality of life in Harlem. SaintPeters.org

Shen Yun Symphony Orchestra
Oct. 15, 2 p.m. & 8 p.m.
Carnegie Hall
Shen Yun Symphony Orchestra invites you on an astonishing musical journey 5,000 years in the making. Reviving Eastern musical traditions through a grand symphony orchestra, this is an experience like no other. Western strings, percussion, woodwinds, and brass accentuate the sound of ancient Chinese instruments like the two-stringed erhu and the plucked pipa. $38–118. ShenYunPerformingArts.org