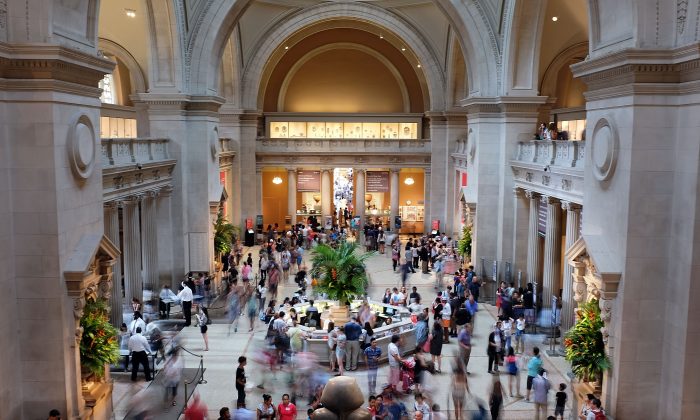 Things to Do Around NYC: September 16–22

Medieval Festival
Sept. 18, 11:30 a.m.–6 p.m.
Fort Tryon Park
The festival brings to life the customs and spirit of the Middle Ages. Ft. Tryon Park is transformed into a medieval market and visitors are greeted with medieval music, dance, magic, jesters, and a live chess game by performers in medieval costumes. The afternoon concludes with a thrilling joust between four knights on horseback starting at 5pm. The rain date is Sunday, Sept. 25. WHIDC.org

Out of Line: Heartbeat Opera
Sept. 22, 9 p.m.–10 p.m.
The High Line
We’ve asked Heartbeat Opera to bring their powerful-but-minimalist production to the High Line as part of our summer-long tribute to the infamous Renegade Cabaret fire escape series: Out of Line. Performance location provided via email following RSVP. Free. TheHighLine.org

Expressions of Nature in Korean Art
Through Sept. 18
The Met Fifth Avenue
The display shows how select motifs, especially plants and animals, have been illustrated on ceramics, painting, sculpture, lacquer, and textiles, and what they mean. Some types of images and symbols are nearly universal across East Asia; others are specific to Korea. $12–$25 suggested. METMuseum.org

The Battle of Brooklyn
Sept. 23–Jan. 8
New York Historical Society, 170 Central Park West
On August 27, 1776, on the marshy fields of Gowanus and Red Hook, George Washington and his rag-tag army of untrained soldiers fought the Royal Army, one of the most powerful military forces in the world. NYHistory.org

Bound for Broadway
Sept. 26, 7:30 p.m.
Merkin Concert Hall, 129 W. 67th St.
Want to see the next Avenue Q or Hamilton before anyone else? Don’t miss Bound for Broadway! An annual event eagerly anticipated by New York’s most serious and knowledgeable musical theater fans, this performance previews some of the best new musicals headed to New York theaters. KaufmanMusicCenter.org

Tristan und Isolde
Sept. 26–Oct. 27
Metropolitan Opera
Tristan und Isolde opens the Met season in a new production by Mariusz Treli?ski (the director responsible for the 2014-15 season’s double bill of Iolanta and Bluebeard’s Castle), and will be well served by a cast of outstanding Wagnerians: Nina Stemme as Isolde, Stuart Skelton as Tristan, Ekaterina Gubanova as Brangäne, and René Pape as King Marke, with Sir Simon Rattle conducting, in one of his rare appearances at the Met. From $27. MetOpera.org