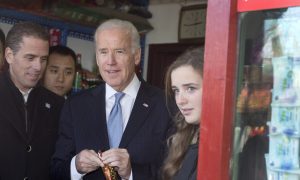 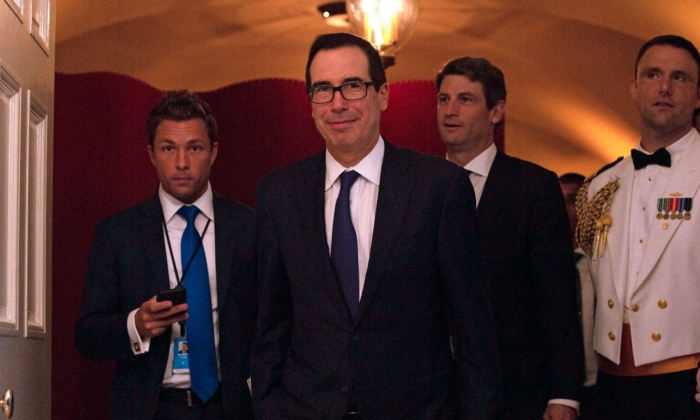 ‘Things Are Being Implied That Don’t Exist,’ Mnuchin Says of Trump’s Ukraine Call

U.S. Treasury Secretary Steven Mnuchin in an interview aired on Sept. 22 defended President Donald Trump’s handling of a call with the president of Ukraine.

Mnuchin told CNN that allegations suggesting that Trump pressured Ukrainian President Volodymyr Zelensky to investigate the son of former Vice President Joe Biden are based on one person’s speculation.

“I wasn’t on the call, but I have no reason to believe the president pressured … a foreign leader. I think this is a lot being made up about one person’s speculation,” Mnuchin said. “I think things are being implied that just don’t exist.”

Mnuchin was responding to questions surrounding an alleged whistleblower complaint filed by a government official regarding Trump’s call with a foreign leader. The content of the complaint and the transcript of the call haven’t been disclosed to the public.

Secretary of State Mike Pompeo said in an interview aired on Sept. 22 that it would be inappropriate to disclose the transcript of the call.

“Those are private conversations between world leaders, and it wouldn’t be appropriate to do so, except in the most extreme circumstances,” Pompeo told ABC.

Trump told reporters at the White House on Sept. 22 that his call with Zelensky was largely congratulatory and included discussion of a number of subjects, including corruption. Trump said he told the Ukrainian leader that he doesn’t want people such as Biden and his son Hunter Biden contributing to corruption in Ukraine.

“The new president is saying that he’s going to be able to rid the country of corruption, and I said that would be a great thing. We had a great conversation,” Trump said.

Hunter Biden’s business links in China and Ukraine have been highlighted repeatedly by Trump, who on Sept 20 urged the media to look into Joe Biden’s remarks last year about how he pressured the Ukrainian government into firing the prosecutor who was investigating Burisma, the Ukrainian company for which Hunter Biden served as a board member.

While the Democratic presidential candidate told reporters in Iowa on Sept. 21 that he didn’t speak to his son about the latter’s business dealings in Ukraine, Hunter Biden told The New Yorker earlier this year that he did discuss Burisma with his father.

Joe Biden said Congress should investigate the call between Trump and Zelensky, suggesting, without evidence, that Trump had “intimidated” Zelensky.

“Why is he on the phone trying to intimidate a foreign leader?” Biden said. “Depending on what the House finds, he could be impeached, but I’m not making that judgment right now. The House should investigate it.”

Rep. Adam Schiff (D-Calif.) suggested that impeachment “could be the only remedy” if the allegations about the content of the call prove true.

“The president is pushing us down this road,” Schiff told CNN in an interview aired on Sept. 22.

Trump’s attorney, Rudy Giuliani, had brought attention to Hunter Biden’s business dealings in Ukraine in May. Giuliani canceled a trip to Ukraine at the time in part to avoid the perception that he was heading to the country to dig up dirt on the president’s potential election challenger.

Giuliani again defended his handling of the matter in an appearance on Fox News aired on Sept. 22.

“What they’re trying to say is I went there for a political mission to kind of get Joe Biden in trouble. Ridiculous. I went there as a lawyer defending his client,” Giuliani said.

“I have all the contacts between Democrats and the Ukraine,” Giuliani said. “When the rest of this comes out and we look at China and the $1.5 billion that the Biden family took out of China while that guy was negotiating for us, this will be a lot bigger than Spiro Agnew.”