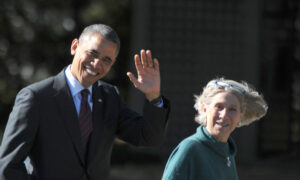 ‘Thin Blue Line’ Flags Appear Across the US

Around the United States, people have been flying black, white, and blue American flags—with a single, bright blue line down the middle.

The flags are intended to express condolences to the five police officers who were shot and killed during protests in Dallas on Thursday night.

On social media, people have posted the flags:

Thank you @pamelafurr for your crafty, thoughtful work & making these thin-blue-line flags for two of our finest. pic.twitter.com/401sNJ0qHP

OC Vet Demands Respect for the Flag
The flag, or the “Thin Blue Line USA Flag,” is designed to represent “the officer and the courage they find deep inside when faced with insurmountable odds,” according to Flags Unlimited, an online vendor that sells the flags. It adds: “The Black background was designed as a constant reminder of our fallen brother and sister officers. The Line is what police officers protect, the barrier between anarchy and a civilized society, between order and chaos, between respect for decency and lawlessness.”

However, it could be argued that the “Thin Blue Line” flag could be seen as desecration of the American flag, according to the official U.S. Flag Code.

“The flag of the United States shall be thirteen horizontal stripes, alternate red and white; and the union of the flag shall be fifty stars, white in a blue field,” the Flag Code states.