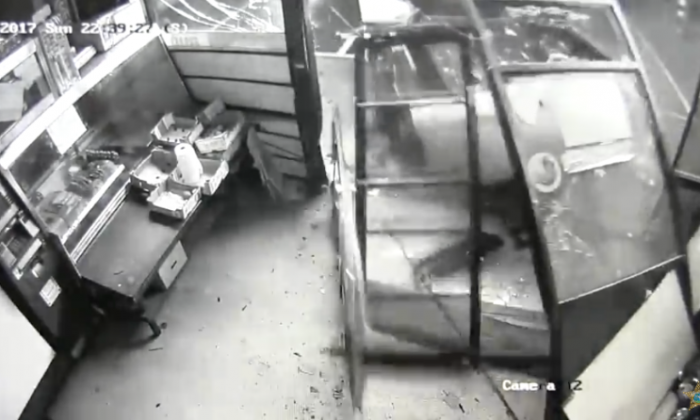 Thieves Use Stolen Trucks to Rob Tampa Businesses During Irma

It is said that great minds think alike. Apparently, criminal minds do too.

Security camera footage shows four suspects ramming their way into Teresa’s Food Market in Tampa. The thieves used a four-door Ford F-150 pickup they heisted earlier in the day. The quartet made off with a lottery machine and sundry merchandise.

A reward has been offered for any information about the Sept. 10 break-in.

Hillsborough County sheriff’s deputies are investigating this and another pair of similar robberies. Video caught several suspects entering Tampa Bay Powersports after driving a vehicle through the side wall. This bunch grabbed seven dirt bikes valued at more than $38,000. The burglars damaged several more motorcycles when they crashed through the wall.

Smalls was caught trying to flee on foot after a routine traffic stop revealed that not only was the truck stolen, it was packed with merchandise looted from DTLR Clothing and Shoe Mountain.