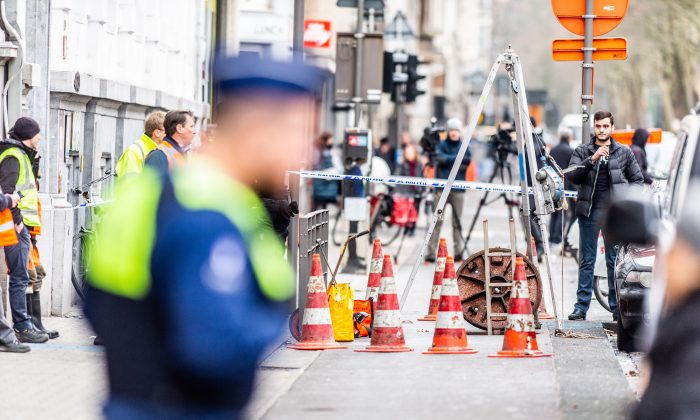 Police cordon off the area outside the BNP Paribas Fortis bank following a robbery in Antwerp, Belgium, on Feb. 4, 2019. (Jonas Roosens/AFP/Getty Images)
Europe

Thieves in Belgium crawled through narrow sewage pipes to carry out a bank heist, stealing the contents of a bank vault.

The heist took place in Antwerp on Feb. 3, with 20 to 30 safety deposit boxes looted in the BNP Paribas Fortis bank located close to the city’s diamond quarter.

To reach the vault, the thieves dug a 330-yard tunnel from the basement of a nearby house, crawled through sewer pipes, then dug another 10-yard tunnel before entering the vault.

A security company linked to the bank called the police at 1:44 p.m. after their alarm went off. When bank employees entered the vault there was a hole in the floor—but the thieves had disappeared.

The bank’s customers are mostly Indian and Jewish diamond traders, who are expected to tell investigators what was in their safety deposit boxes. So far, the value of what has been stolen is unknown.

The whole operation was highly risky, an engineer who works for a water purification company said, with some parts of the sewage system just 15-inches wide.

Els Lieken of Aquafin told local radio she didn’t know how the burglars got out alive.

“First of all, digging the tunnel toward the sewage system was dangerous for the robbers themselves because of a possible subsidence. … And inside the sewer, you have all kinds of danger, such as gas concentrations coming from the wastewater,” she said.

A woman who lives on a nearby street told Het Nieuwsblad newspaper she had heard “a lot of banging” from her neighbors in the days leading up to the robbery.

Bank customers have found it hard to obtain information on whether their valuables were stolen, with Belgian media describing them as “frustrated” by the bank’s lack of response.

“At the moment no suspects could be apprehended,” Antwerp prosecutor’s office said in a statement. “We are investigating the size of the robbery and we cannot provide further information.”

The bank is located on the edge of the largest diamond district in the world, with a turnover of $56 billion in 2012, according to the CEO of the World Diamond Center.

A similar heist took place in 1976, when 13 people used the sewers to break into a bank in Nice, France, stealing gold, jewelry, and cash from more than 200 deposit boxes.