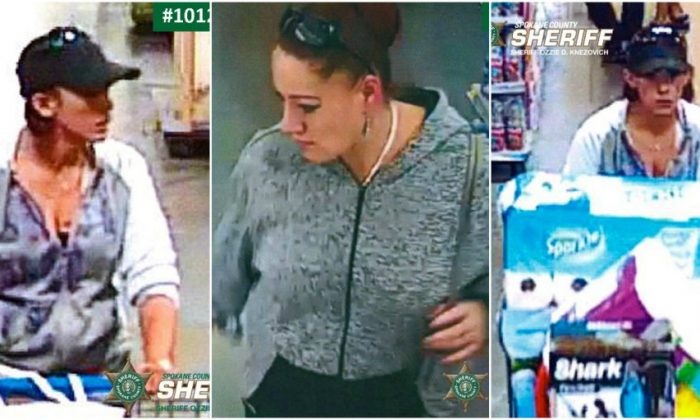 Thieves burglarized the car of one of the parents who parked on a highway and rushed to a high school to check on their children after hearing news of a shooting.

A number of parents parked their cars on Highway 27 in Spokane County, Washington, on Wednesday and ran more than a mile to Freeman High School where a shooting was reported. Meanwhile, sometime between 10:30 a.m. and noon, thieves broke into one of the cars, according to the Spokane County Sheriff’s Office, and stole a purse.

The thieves then ran up $36,000 in credit card charges and fraudulently cashed checks, police say. Detective Dean Meyer released photos of the suspects and asked the public for help, KHQ reported.

Anyone with information regarding this theft or can help identify these suspects can call Detective Dean Meyer at 509-477-3159.

The teenager accused of opening fire at his Washington state high school, killing a student, told police he took the firearms from his father’s gun safe and wanted to teach his classmates a lesson about “bullying,” court papers showed on Thursday.

An affidavit filed by a police detective following 15-year-old Caleb Sharpe’s arrest stated that the suspect said he had been picked on by the slain boy, identified only by his initials, S.D.S., who told Sharpe: “I always knew you were going to shoot up the school.”

Kathy Strahan, of Brea, California, told Reuters the student killed in the shooting spree on Wednesday morning was her great-nephew, Sam Strahan.

Sharpe discarded an AR-15 assault rifle that had jammed, and then fired into the boy’s abdomen and face with a pistol before walking down a hallway at Freeman High School in the Spokane suburb of Rockford, shooting indiscriminately at other classmates, according to the court papers.

Three female students were also wounded in the shootings. All three girls were listed in satisfactory condition at a hospital on Thursday. “It’s our intention to try him as an adult for premeditated murder,” Spokane County Sheriff Ozzie Knezovich told reporters. “This young gentleman got sucked into a counterculture of violence.”

Knezovich declined to discuss what detectives believed motivated the shooting, but cited mental health issues and suggested Sharpe may have been influenced by violence on television and in video games.

Sharpe had been under the care of a school counselor after talking about killing himself, according to the court papers, which said his parents told detectives he gave them a suicide note a week earlier.

The sheriff’s office said “documents” belonging to the suspect showed he had been planning the attack, although it was not clear for how long. Sharpe was being held on one count of first-degree murder and three counts of attempted murder.

Freeman student Michael Harper told the Spokesman-Review newspaper that Sharpe was a friend who loved the AMC network drama “Breaking Bad,” about a chemistry teacher who turns to cooking methamphetamine, and that the suspect had recently become obsessed with documentaries about school shootings.

Another classmate told police that Sharpe made improvised explosive devices out of various chemicals and gas and that his father bought him guns, according to the affidavit.

A school bus driver told police she was suspicious when Sharpe boarded on Wednesday morning carrying a large black duffel bag because she knew he was not involved in athletics. It was not clear if the driver alerted anyone.

Sharpe surrendered to a janitor after his pistol ran out of ammunition, the affidavit said.